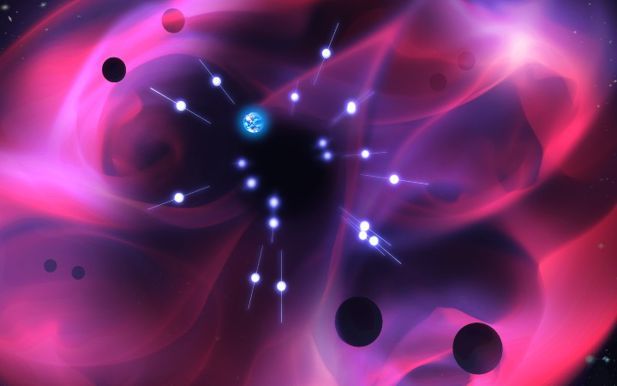 Scientists observed changes in the signals coming from rapidly-spinning stars called millisecond pulsars that might point to the existence of subtle space-time ripples vibrating throughout the entire universe.

Millisecond pulsars are stellar remnants that spin hundreds of times per second, producing precise radio pulses that can act as a cosmic metronome. Scientists think that ripples in space-time, called gravitational waves, can affect these signals as they travel through space. When an international team of researchers recently detected a strange disruption to the pulsar signals, they determined this may have been a product of such an interplay.Â

“This is a very exciting signal! Although we do not have definitive evidence yet, we may be beginning to detect a background of gravitational waves,” Siyuan Chen, a researcher at the Kavli Institute for Astronomy and Astrophysics at Peking University in China, and leader of the new work said in a statement.

The detection of gravitational waves in 2015 was one of the greatest astronomical highlights of the past decade. Albert Einstein’s theory of general relativity, published a century earlier, suggested that the fabric of space-time can undulate when massive objects, like neutron stars and black holes, crash into one another, triggering ripples that are felt across vast distances. But it wasn’t until sophisticated detectors such as the Laser Interferometer Gravitational Wave Observatory (LIGO) in the U.S. and the Virgo Collaboration in Europe came about that the detection of Â these powerful vibrations was made possible.

But some questions remained. Physicists have theorized that the sum of eons-worth of ripples produced by these cataclysmic events could have created a gravitational wave background that is constantly present and permeates the entire universe; something that hasn’t yet been detected.

The detection of the disrupted signal coming from the millisecond pulsars may be just the step toward proving the existence of this background.Â

Extremely dense and only about the size of a city, millisecond pulsars emit radio signals from their poles as they spin. The frequency of these signals is incredibly regular and can even be used as a sort of ‘galactic clock’ against which other phenomena can be timed.Â

Building on an approach first described in January 2021, a team of astronomers working as part of the International Pulsar Timing Array (IPTA) project detected odd shifts in these signals. They believe the disruption may be caused by the interference from the gravitational wave background.Â

But the team is also conservative about the findings, acknowledging that other possible explanations for their detections need to be ruled out. “We are also looking into what else this signal could be,” Boris Goncharov, a scientist at the Parkes Pulsar Timing Array (PPTA), who collaborated on the study said in the statement. “For example, perhaps it could result from noise that is present in individual pulsars’ data that may have been improperly modeled in our analyses.”

IPTA’s data is made up of the combined findings from three independent data sets, collected by European Pulsar Timing Array (EPTA), the North American Nanohertz Observatory for Gravitational Wave (NANOGrav) and PPTA.Â

The research was published on Wednesday (Jan. 12) in the journal Monthly Notices of the Royal Astronomical Society.