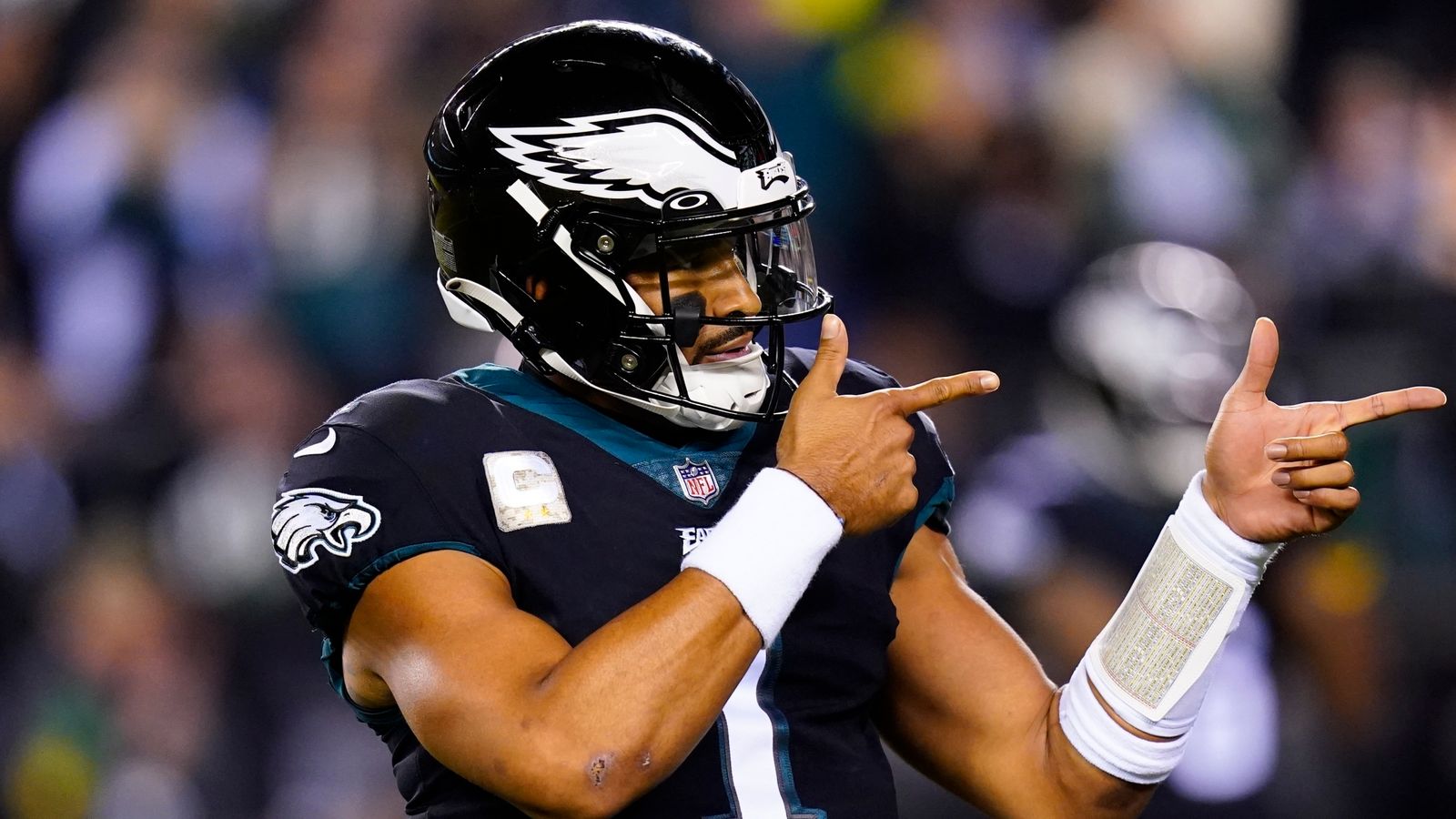 The Philadelphia Eagles moved to 10-1 with a 40-33 victory over the Green Bay Packers, who slip to 4-8, as Jalen Hurts rushed for 157 yards while an injured Aaron Rodgers was replaced late on by Jordan Love.

Highlights of the Philadelphia Eagles’ victory over the Green Bay Packers

Highlights of the Philadelphia Eagles’ victory over the Green Bay Packers

Story of the Game

Hurts completed 16 of 28 passes for 153 yards while carrying the ball 17 times to break the team record for rushing yards by a quarterback set by Michael Vick with 130 against the New York Giants in 2010.

Philadelphia (10-1) rushed for 363 of their 500 total yards and matched the team’s best start since the 2017 side that won Super Bowl LII, with Miles Sanders running for 143 yards and two touchdowns.

Green Bay (4-8) fought hard but lost for the seventh time in eight games and fell to 1-6 away from home, including a Week 5 loss to the Giants in London.

Aaron Rodgers passed for 140 yards with two touchdowns and two interceptions before leaving the game with an oblique injury late in the third quarter. His nine interceptions this year are his most since tossing 11 in 2010.

Hurts’ six-yard touchdown pass to AJ Brown put the Eagles up 34-20 midway through the third.

Rodgers, playing with a broken thumb since the setback in England, departed after Mason Crosby’s 29-yard field goal made it 34-23 with 2:03 left in the third.

Jordan Love took over in the fourth quarter, trailing 37-23 after Jake Elliott’s 31-yard field goal. Love’s third pass was a 63-yard TD to Christian Watson – the rookie receiver’s sixth score in his last three games – to make it 37-30 with 9:00 left.

Crosby answered with a 33-yarder with 1:08 to play, but the Eagles recovered the onside kick and ran out the clock.

Love finished six of nine for 113 yards and Watson had four catches for 110 yards.

Kenneth Gainwell’s four-yard touchdown run capped the opening drive of the game by the Eagles, before Rodgers’ first pick led to a 15-yard scoring run by Sanders and a 13-0 lead for the hosts.

AJ Dillon’s 20-yard touchdown run put the Packers on the board, after which they went up 14-13 on Rodgers’ 11-yard strike to Randall Cobb.

Sanders scored from two yards out on the first snap of the second quarter to move the Eagles back on top 20-14.

After Quay Walker’s 63-yard fumble return, Rodgers tied it up with a 23-yard touchdown strike to Aaron Jones.

The Eagles continue their season at home to the Tennessee Titans (7-4), while the Packers visit the Chicago Bears at Soldier Field.

Before then Week 12 in the NFL concludes on Monday night when the Indianapolis Colts host the Pittsburgh Steelers.