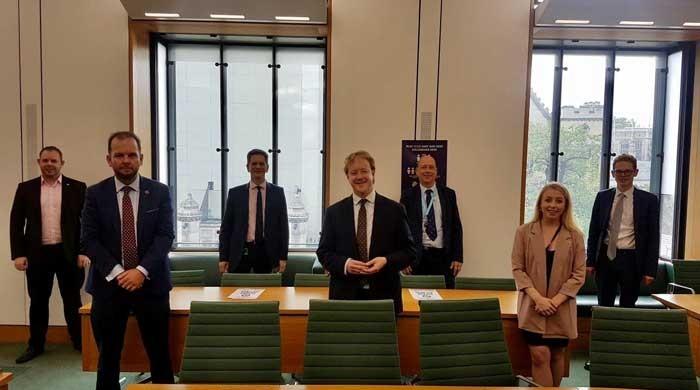 LONDON: Seven lawmakers of the United Kingdom’s ruling Conservative Party re-launched a group named â€œThe Conservative Friends of Kashmirâ€ to campaign for self-determination in Indian occupied Kashmir (IoK) and highlight the lockdown of millions of Kashmiris by the Indian forces.

â€œWe have relaunched. We campaign for self-determination and an end to human rights abuses in Kashmir and Jammu. There is growing support for our cause amongst Conservative MPs and activists. Follow us and our work!â€ said The Conservative Friends of Kashmir on their new Twitter handle.

â€œWe are immensely grateful to you for re-launching the Conservative Friends of Kashmir. Your voices shine ray of hope to the wounded Kashmiris in their darkest hours. Besieged, battered, disfranchised â€” they look towards you and your allies for justice,â€ said the AJK president on Twitter.

The MPs represent constituencies with significant Pakistani populations and all of them have been vocal in condemning occupation and rights violations inside the occupied territory.

Brereton, Daly and Bristow are also members of the All-Party Parliamentary Group on Kashmir (APPGK), which is chaired by Labour MP Debbie Abrahams.

Raja Najabit Hussain, chairman of JK Self Determination Movement International (JKSDMI), also welcomed the launch of the group. He said that thousands of Kashmiris and Pakistanis vote for the conservatives and the party must adopt a clear position against the genocide of Kashmiris by the Modi government. He said that Indian propaganda stands exposed and Tory MPs have an important role in highlighting the sufferings of besieged Kashmiris.

The move has sparked rage amongst Tory-supporting British Indians linked with extremist Hindutva groups including the Bhand RSS. The Conservative Friends of India (CFI), a front of Bharatiya Janata Party (BJP) and Rashtriya Swayamsevak Sangh (RSS), was the first to react angrily on re-launch.

The move has also led BJP linked Tory Indians to issue threats to the Conservative Party. Kuldeep Shekhawat, president of the Overseas Friends of BJP (UK), said: â€œBritain has no right to interfere in India’s internal matters.”

On the other hand, Kashmiri leader Raja Sikandar Khan condemned threats issued by BJP-linked Indian politicians in Britain. He said it was unfortunate that pro-BJP British Indian leaders were threatening to cut off aid of Tory party for supporting human rights of Kashmiris.

Sikandar said that the re-launch of the parliamentary group was a step in the right direction. He also invited more Tory MPs to join the group and stand by the people of Kashmir.