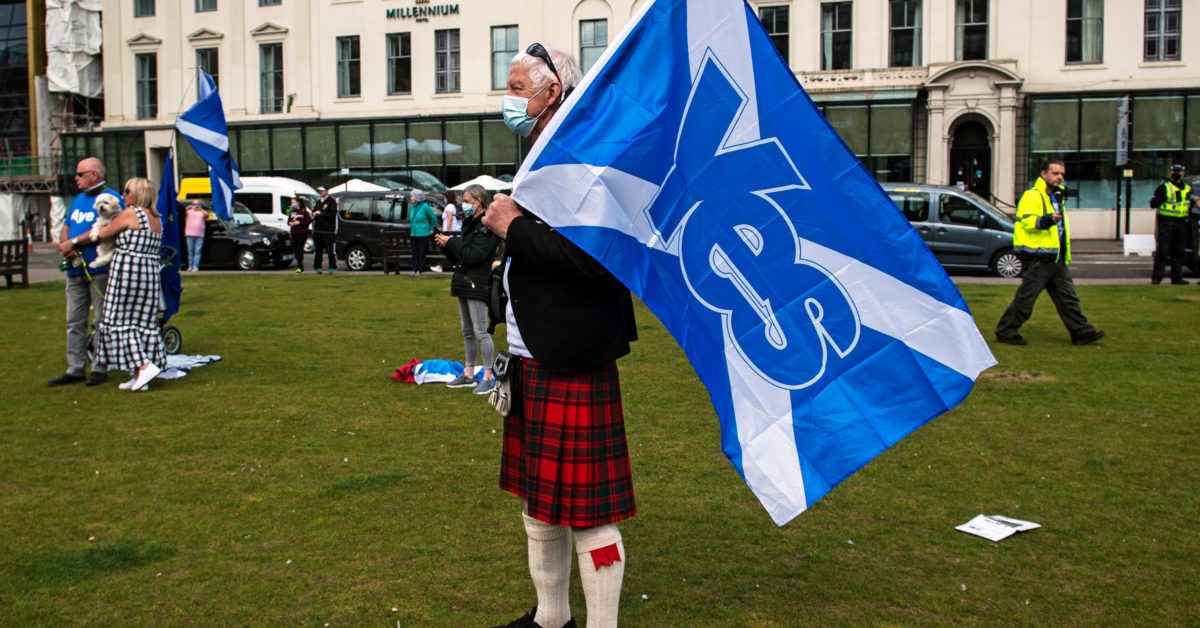 EDINBURGH â€” The Scottish National Party might be a happier crew than in recent years but they are no closer to independence.

Armed with new lines â€” plus some familiar arguments â€” aimed at convincing Scots of her vision of an independent Scotland inside the European Union, First Minister Nicola Sturgeon used her keynote conference speech Monday to restart a more outward-facing push toward a second referendum.

While this time last year Sturgeonâ€™s party was beset by infighting over independence and other tricky policy issues, the mood at this yearâ€™s virtual gathering of the faithful was buoyant. Despite attacks from the breakaway Alba party, formed ahead of Mayâ€™s parliamentary elections to run on a more radical pro-independence ticket, the SNP were more united than they have been for many years.

In forming a party so critical of Sturgeon, Alba leader Alex Salmond has arguably done his former protege a favor by drawing disaffected SNP members out of her party.

However, united or not, the SNP must still face a significant barrier on the path to independence: the U.K. government. Before the first minister had even finished speaking Monday, Boris Johnsonâ€™s official spokesman had dismissed her call for â€œco-operationâ€ between the governments on a second referendum.

Earlier this month, the SNP-led Scottish government ordered officials to restart work on a â€œdetailed prospectusâ€ making the case for independence. Now joined by fellow pro-independence party the Scottish Greens in government, the SNP have said a new referendum should take place by 2023.

Johnsonâ€™s U.K. government have so far indicated they wonâ€™t grant a new referendum as Scotland voted to stay in the U.K. in 2014, though Scottish Secretary Alister Jack recently told POLITICO another referendum could be held if 60 percent of Scots wanted one.

Path to a second referendum

As the debate enters a new phase, the pro-independence campâ€™s key arguments can roughly be divided into two.

On Monday, Sturgeon first demonstrated the SNPâ€™s attempt to normalize the idea of independence, a technique beloved by SNP technocrats who believe Scots on the fence will be convinced of the merits of independence if they see it not as a radical jump into the unknown, but as an obvious tweak that â€œworksâ€ for other countries of a similar size to Scotland.Â

â€œFor countries of Scotlandâ€™s size, independence works,â€ Sturgeon said, sticking to the script. â€œIt works for Denmark, for Ireland, for Austria, for Norway, for Finland â€” and for so many others beside. These are disparate countries with different resources and economies, but independence works for all of them.â€ The U.K.â€™s exit from the EU despite Scotlandâ€™s vote to Remain has helped the pro-EU SNP make this argument, as they now point to the prize of re-joining as a plus point for independence.

Second, Sturgeon asked Scots to look at the alternative of remaining tethered to Westminster, a more typically populist argument that is easy for the SNP thanks to Johnsonâ€™s unpopularity in Scotland.

Senior SNP figures lined up over the conference weekend to attack the Conservative government in Westminster on issues as diverse as a hike in the National Insurance tax, Brexit and benefit cuts.

For her part Sturgeon warned that Brexit â€œis a direct Tory hit on some of Scotlandâ€™s key strengths,â€ even suggesting that â€œWestminster will use all that damage that they have inflicted as an argument for yet more Westminster control â€¦ by making us poorer, theyâ€™ll say we canâ€™t afford to be independent.â€

In the aftermath of the speech, Scottish Tory lawmaker Donald Cameron accused Sturgeon of inventing a â€œwild conspiracy theory.â€

â€œInstead of focusing on the NHS crisis and protecting jobs, Nicola Sturgeon has invented her own nationalist Project Fear,â€ he said.

â€œIt is in that spirit of co-operation that I hope the Scottish and U.K. governments can reach agreement â€” as we did in 2014 â€” to allow the democratic wishes of the people of Scotland to be heard and respected,â€ Sturgeon said.

â€œBut, this much is clear. Democracy must â€” and will â€” prevail,â€ she added, signaling the SNPâ€™s willingness to take independence to the courts if necessary. Pro-union politicians are quietly confident any legal challenge is likely to be settled in their favor.

Though some pro-independence supporters have expressed unease at the timescale and the lack of a plan B if there is no agreement with Westminster and legal action fails, opposition to the SNP leadershipâ€™s blueprint from inside the party was relatively limited.

While this will be welcomed by Sturgeon, she has a lot of work do to disprove Salmondâ€™s critique that her quest for independence is like â€œGroundhog Day.â€