He Hurled a Smoothie and Insults. Now Heâ€™s Charged With a Hate Crime. 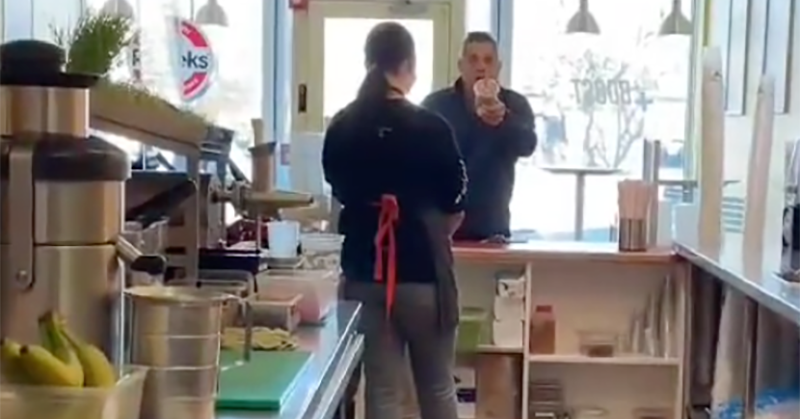 The tirade started over a smoothie, with a Connecticut man demanding to know who made a drink that he said triggered his sonâ€™s severe allergic reaction to peanuts.

The enraged father then hurled the smoothie at a worker, calling her an â€œimmigrant loserâ€ before trying to barge into an employees-only area at a Robeks in Fairfield, Conn., as a cellphone camera recorded the confrontation on Saturday.

Now, the man, identified by the police as James Iannazzo, 48, of Fairfield, is facing a hate crime charge in connection with the outburst, which also cost him his job as a financial adviser for Merrill Lynch Wealth Management.

The video of Mr. Iannazzoâ€™s harangue ricocheted across the internet after it was shared on a Facebook group page for local mothers in Fairfield, an affluent suburb about 55 miles northeast of Manhattan.

â€œYou donâ€™t know who made it?â€ Mr. Iannazzo yelled in the video, repeatedly swearing at the shopâ€™s young employees, whom he called â€œignorant high school kids.â€

The employees told Mr. Iannazzo that they did not know who made the smoothie because there were four people working at the time.

â€œYou have no room to yell at us,â€ one of the employees told Mr. Iannazzo, the video shows. The employees said he could contact the corporate offices of Robeks, a national smoothie chain based in Los Angeles.

The Fairfield Police Department said in a news release on Sunday that Mr. Iannazzo made comments toward an employee â€œreferencing their immigration status.â€ The video shows thrown smoothie hitting one of the employees in the shoulder.

He was charged with intimidation based on bigotry or bias in the second-degree, second-degree breach of peace and first-degree trespassing, the police said.

In a statement on Sunday on Twitter, Frank J. Riccio II, a lawyer for Mr. Iannazzo, said that his client had emphasized to the storeâ€™s workers that the smoothie must not contain peanuts â€” and that the receipt for his sonâ€™s drink order specified that it should not contain peanut butter.

He said Mr. Iannazzoâ€™s son had to be taken by ambulance from the familyâ€™s home to a hospital.

â€œWhen faced with a dire situation for his son, Mr. Iannazzoâ€™s parental instinct kicked in and he acted out of anger and fear,â€ Mr. Riccio said. â€œHe is not a racist individual and deeply regrets his statements and actions during a moment of extreme emotional stress.â€

The police confirmed that a 911 call was received at 1:39 p.m. on Saturday from Mr. Iannazzoâ€™s home, where a young person was experiencing an allergic reaction. About 34 minutes earlier, Mr. Iannazzo had made a purchase at Robeks, according to the police, who did not say whether the smoothie had caused the allergic reaction. Additional information on the sonâ€™s condition was not immediately available on Monday.

â€œDuring the investigation, employees reported that Iannazzo never told them about the peanut allergy but had only requested that there be no peanut butter in his drink,â€ the police said.

A spokesman for Bank of America, the parent company of Merrill Lynch, confirmed in an email on Sunday that Mr. Iannazzo no longer worked there.

â€œOur company does not tolerate behavior of this kind,â€ the spokesman, Bill Halldin, said. â€œWe immediately investigated and have taken action. This individual is no longer employed at our firm.â€

A Google listing for Mr. Iannazzoâ€™s wealth management office, which was based in Stamford, Conn., was flooded with negative reviews after his tirade.

Mr. Iannazzo turned himself in to the police on Saturday and was later released, the authorities said. He is scheduled to appear on Feb. 7 in State Superior Court in Bridgeport, Conn.

Barbara Caruso, a spokeswoman for Robeks, called the outburst disturbing.

â€œThe company and its franchisees have a zero-tolerance policy for this type of behavior, and we are thankful that the franchiseeâ€™s team members were not physically hurt,â€ Ms. Caruso said on Monday. â€œWe appreciate the swift action by law enforcement and the judicial system in pursuing criminal charges for this unacceptable behavior.â€

Ms. Caruso said that the smoothie chain takes seriously any concerns about order accuracy for guests who have allergies.

â€œThe allergy notice is posted in-store, on printed menus and is available online to provide full ingredient transparency for guests,â€ she said. â€œWe will be investigating concerns surrounding this order in question.â€

The manager of the Fairfield store, which is an independently owned franchise, was not immediately available for comment on Monday.

Brenda L. Kupchick, the chief elected official in Fairfield, said on Monday that she was grateful that the police took swift action and charged Mr. Iannazzo.