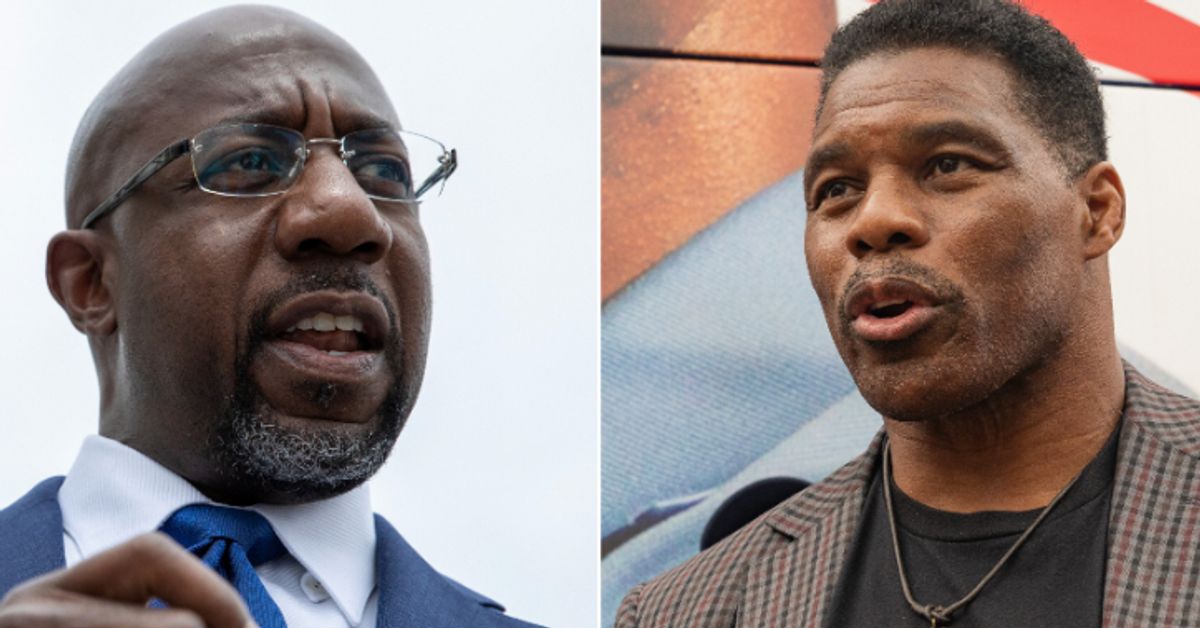 At the same time, Georgia Gov. Brian Kemp (R) has been leading Democratic gubernatorial nominee Stacey Abrams by an even bigger margin.

To an outside observer accustomed to hearing from partisans on either side, the disparity in how the respective nominees from the same party are faring appears curious.

But after HuffPost attended a focus group of eight Georgia swing voters who cast ballots for Donald Trump for president in 2016 and for Joe Biden in 2020, it became clearer why some hard-to-categorize voters without strong partisan identities are picking both Kemp, a Republican, and Warnock, a Democrat.

The biggest takeaway? Walker has been hobbled by the string of scandals surrounding his personal conduct, including the recent allegation that he paid for the abortion of a girlfriend he impregnated in 2009 despite his staunch anti-abortion views. Among this particular group of swing voters, who were mostly critical of Biden’s performance and supportive of Kemp, a generic Republican without Walker’s baggage might have had more appeal.

One white man from northern Georgia initially said he was inclined to overlook Walker’s history in the name of electing a Republican who would counter Biden’s economic policies, which the voter said he believes have been harmful.

But by the end of the discussion, the man wasn’t so sure. He branded Walker a “wild card” and worried that Walker’s messy personal history ― and failure to properly account for it ― might interfere with his ability to govern.

Warnock “hasn’t ― what I call with politics ― ‘crashed the car,’” the man said. “Walker, I like the way I think he’s going to vote, but he might ‘crash the car.’ Very early on, he might just run that thing off a cliff.”

The super PAC has spent more than $450,000 on ads attacking Walker and boosting Warnock but has not picked sides in the gubernatorial race.

The focus group, conducted over Zoom on Thursday night, consisted of five women and three men ― all of whom had voted in Georgia’s Republican primary this year. The contingent included three Black women, one Latino man, two native-born white men and other participants of indeterminate race or nationality.

HuffPost has permission to discuss the participants’ views so long as we do not disclose their names or other details that could jeopardize their anonymity.

Although most of the participants remained undecided in both the Senate race and the gubernatorial race, the moderator, Meaghan Leister of Longwell Partners, eventually pressed them to say how they would vote if they had to decide right then and there.

Asked that question about the Senate race, seven participants said when pressed that they would vote for Warnock, and one picked Walker.

Asked that question about the gubernatorial race, all eight participants said they would vote for Kemp over Abrams.

“He’s the current governor, and I haven’t really had any problems with him during the time, so it’s kind of like, ‘If it ain’t broke, don’t fix it,’” said a Black woman from the Atlanta area, who had described herself as undecided before the moderator forced her to entertain the hypothetical of having to vote immediately. “But at the same time, Stacey Abrams is an African American female such as myself. I feel some type of obligation to her, but really, I don’t have a problem with Kemp.”

The woman said she was “neutral” about Biden because she appreciates the student loan forgiveness but is struggling with inflation and nervous about the declining value of her financial investments. (Biden’s forgiveness of student loans and steps to decriminalize marijuana were his most popular policies among the participants, who ranged in age from younger to middle-aged adults.)

She sounded like the type of voter who is open to an alternative to Warnock, expressing disappointment that Warnock’s ex-wife had accused him of domestic violence.

The moderator did not correct mistaken impressions about the validity of the allegations against Warnock. Warnock’s ex-wife accused him of running over her foot with his car in March 2020, but when police arrived at the scene, they found no evidence of bruising on her foot, leading fact-checkers to cast doubt on the charge’s validity.

Regardless, the woman on the panel seemed more skeptical of Walker than Warnock given the sheer quantity of controversies hovering over the former NFL star and his refusal to take responsibility for any of the allegations against him.

“I don’t trust either one of them, but I definitely don’t trust Walker because it’s just been way too much lies that are easily identifiable with him,” she said. “I know they both had domestic violence charges. I don’t agree with that. But that’s why I say it’s the lesser of two evils at this point.”

No one in the group had much criticism to levy against Kemp. Several people, including the Black woman quoted above, said they appreciated his willingness to stand up to Trump when Trump tried to meddle in the 2020 election results after losing Georgia to Biden. Still angry with Kemp, Trump ultimately backed an unsuccessful primary challenge against him in May.

“Kemp is not just a Republican toy,” she said. “He really does what’s right for his state.”

“To me, it gave Kemp a lot of credibility,” a white man from the suburbs of Atlanta said. “Before that, I thought he was just a hard-line Republican and kind of Trump’s puppet.”

One woman from Atlanta said she had heard “something” about Kemp “purging voters” from the Georgia rolls, but she was unclear what that meant exactly. Otherwise, she had heard he was trying to keep taxes low and help small businesses, which she liked.

Prior to being elected governor in 2018, Kemp served for eight years as Georgia’s secretary of state, overseeing the administration of elections. During that time, he purged 1.4 million names from the state’s voter rolls with the stated goal of clearing out people who’d died, moved or were otherwise ineligible to vote in the state. But in 2017 alone, the state canceled the registration of more than 100,000 people simply for not voting frequently, leading to charges that Kemp had sought to disenfranchise Black voters and other constituencies that were less politically friendly to him.

In some ways, the panel discussion showed the benefits of incumbency. The participants did not have a lot of negative things to say about Abrams, but they simply thought that Kemp was not objectionable enough to exchange him for someone new.

Governors like Kemp have also had the benefit of being able to use the federal recovery funds that Biden signed into law without shouldering the blame for inflation as he has. Thanks to a budget surplus partly enabled by federal largesse, Kemp has suspended his state’s gasoline tax until after the election and provided $350 relief checks to 3 million low-income Georgians ― all without having to significantly reduce spending elsewhere.

Three people in the focus group offered one note of skepticism about Abrams: They said they saw her as cozy with the entertainment industry ― or “more commercial,” as the Black woman from the Atlanta area put it.

In the Senate race, Warnock seemed to benefit from incumbency as well, with many describing positive qualities they saw during his tenure in office.

“He does go across the party lines a lot if he believes in the cause,” said the white man from the Atlanta suburbs. “That’s a very positive quality in a politician.”

The white man from northern Georgia wasn’t so sure about Warnock’s commitment to bipartisanship, but he commended him for other qualities.

“He’s followed suit with the Democrat agenda and Biden,” the man said. “But he has done a good job going out to Georgia businesses, and I’ve seen some press releases about him visiting and taking the time out to look into specific needs in certain industries.”

Panel discussions are inherently limited as tools for measuring public opinion. Among other flaws, the sample sizes are small. The people who participate ― in exchange for modest compensation ― may not be representative of other voters with similar preferences. And moderators provide information that can steer discussion in ways that do not exactly replicate how voters typically learn their information.

But political candidates, parties and the various groups aligned with them employ focus groups to get a sense of the way voters think and how political memes take root among the dwindling demographic of swing voters, many of whom remain undecided until the last minute.

As public polls attest, it is rare for voters to be undecided with about a month to go before an election. Just 5% of likely Georgia voters are undecided in the Senate race and just 3% in the gubernatorial race, according to a Fox5 Atlanta poll conducted Tuesday night.

Those who remain undecided this close to the election often do not follow politics very closely.

The focus group participant who said that he would vote for Walker if he had to vote today was a Latino from the Atlanta area who described himself as feeling “neutral” about Biden.

Asked why he would vote for Walker, the man replied, “That’s just the first option that I could think of. But in all reality, I don’t have enough context or information to give you a solid answer.”

He said he planned to read more about the two Senate candidates before casting his vote.

The Atlanta woman who recalled hearing something about Kemp purging voters echoed his sentiment.

“I might just go with my gut feeling when I get in the door, to be honest,” she said.