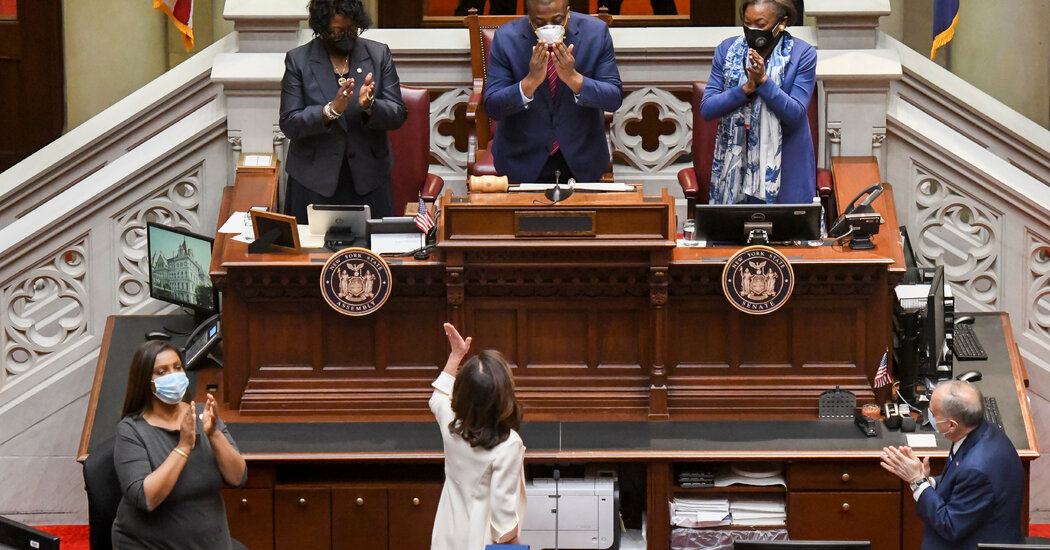 She also pledged to pursue a five-year plan to offer 100,000 affordable homes, though some housing advocates thought she should have offered far more comprehensive protections since the stateâ€™s eviction moratorium is poised to expire. And she laid out a bevy of climate, infrastructure and transportation-related initiatives.

If many aspects of the speech played into concerns of rank-and-file Democratic voters and union officials, Ms. Hochul also repeatedly made overtures to a broader ideological and geographical swath of voters who will power the general election. (â€œI think I have a personal experience with just about every pothole in New York as well, especially on the Long Island Expressway,â€ she said, referring to an important political battleground.).

A Guide to the New York Governorâ€™s Race

A crowded field. Some of New Yorkâ€™sÂ best-known political figuresÂ are running in the 2022 election to be governor of the state. Here areÂ the key peopleÂ to watch in the race:

Bill de Blasio. Mr. de Blasio, a Democrat who is in his final weeks as mayor of New York City, has yet to announce his candidacy, though he has reportedly been mulling a gubernatorial bid. He is likely to face skepticism from voters across the state.

Representative Lee Zeldin of Long Island is seen as the most formidable Republican contender in the governorâ€™s race, though any Republican seeking a statewide office in New York faces very long odds, and Mr. Zeldin, a staunch Trump ally, would face particular scrutiny for voting to overturn the results of the 2020 election.

Still, Ms. Hochulâ€™s speech came several months after Democrats were deeply shaken by election results around the country. In New York, Democrats suffered a spate of unexpected losses in local races in November, driven on Long Island by concerns around crime and taxes. The governorâ€™s race in neighboring New Jersey â€” which was defined partly by debates over taxes â€” was closer than many expected, with a stunning down-ballot loss. And the Democratic candidate in the Virginia governorâ€™s race lost a contest that was shaped by education matters, including parental frustration concerning closed schools.

The governor aimed to address all of those issues directly.

She repeatedly emphasized her commitment to combating gun violence and tackling quality-of-life issues, and she has endorsed funding for law enforcement officers and prosecutors and investments in neighborhoods where violent crime is common. She also stressed that she understood deeply held concerns around public safety, even though New York is far safer today than in earlier eras.

Ms. Hochul devoted a significant part of her speech to discussing matters of affordability. She proactively addressed the challenge of inflation, she made overtures to farmers â€” not typically seen as a reliable Democratic constituency â€” and she offered a number of tax proposals. She proposed accelerating tax cuts for the middle class, and her call for a property tax rebate may be especially resonant in the suburbs.