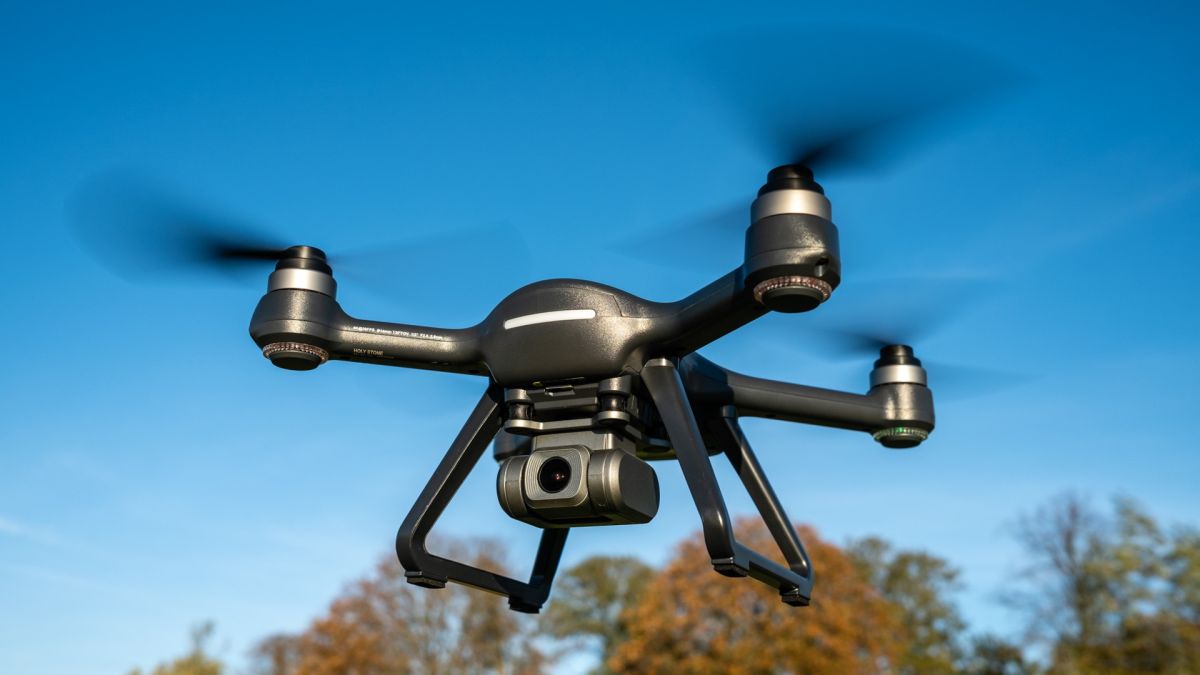 These days, it’s difficult to find camera drone models that don’t feature a folding design. But bucking that trend is the Holy Stone HS700E; it resembles DJI Phantom models but in a smaller, lighter and ultimately more portable package despite not folding for transportation and storage. It’s not the most recent model in the Holy Stone line-up and was first available on Amazon in June 2020.

Holy Stone drones are most readily available from the online retailer, which makes purchasing them convenient wherever in the world you’re based. The HS700E is one of the company’s more expensive models currently available, but at $299.99/£289.99 (opens in new tab) it remains a budget model that will appeal to beginners and those on a budget looking to buy a drone.

You’d be forgiven for thinking that such a low price means a serious lack of features, but the HS700E has a few tricks up its sleeve that may surprise you. It also flies well making it a good option for beginners, but the good overall package is let down by poor image quality which we’ll discuss in detail later. This doesn’t mean the drone isn’t worth considering, and it may not be one of the best drones on the market right now, but its low price and flight features make it an attractive drone for beginners and those on a budget.

Sporting a non-folding design, the HS700E looks like the previous generation of drones with an overall design that’s reminiscent of the DJI Phantom series. But at 380x230x125mm and weighing in at 19.64oz / 557g, it’s much smaller and lighter. This non-folding design means that the drone’s propellers need to be detached each time the drone is packed into its case for transportation or storage, but these are easy to install and clearly labelled to ensure the propellers are attached to the correct arms.

The motors are reasonably powerful and combined with the large propellers the drone can remain steady when hovering. Battery life is respectable from the 2800mAh Li-ion batteries with a reliable advertised flight time of 21 minutes per battery. The batteries are charged using the included USB-C cables that can be plugged into a USB charger or any USB charging socket which is convenient, but the downside here is that they take 4-5 hours to fully charge when close to empty.

The controller folds down for transportation and offers a telescopic phone holder at the top with two arms that fold down at the bottom for increased comfort. There’s a dial to control the gimbal angle as well as buttons to change the flight mode and a shutter button to take photos. With the phone in place, it’s easier to use the video and photo shutter buttons in the Ophelia Go app. There’s also a small screen that shows useful drone and flight information. The controller and drone connect using 5GHz WiFi which is one of the stronger and more reliable WiFi connections we’ve experienced with Holy Stone drones.

Despite the shortcomings in camera functionality and image quality, the HS700E flies well with responsive and reliable controls that can’t be faulted. The drone is also reasonably quiet for a model of its size and certainly doesn’t sound like a swarm of angry bees. Two flight modes offer different speeds, but both are moderate so well suited to beginners; Sport mode (High) is the faster of the two and similar to the Standard flight mode of more expensive drones, while Tripod mode (Low) provides an even slower flight speed. You can also activate a beginner mode to restrict altitude and distance.

The main features of the HS700E include GPS and Glonass GPS positioning and a return to home function. The latter can be activated by the pilot if it’s ever needed or simply to return the drone to the take-off point, or automatically activated when the signal between the controller and drone is weak or lost. There are also the subject tracking modes Follow Me and Point of Interest modes, where the flying distance between the drone and subject can be set in the Ophelia Go app. Then there’s Headless mode which keeps the controls the same regardless of the drone’s direction in relation to the pilot; a left movement of the roll control will turn the drone to the pilot’s left, for instance.

There’s no collision avoidance available so you have to take care when flying close to obstacles and in complex environments; you always have to maintain visual line of sight so if you’re careful this isn’t a problem, but collision avoidance would be a welcome feature. There are, however, optical flow sensors on the bottom of the drone to detect downward obstacles although these are crude compared to true collision avoidance. Overall, all the flight features are useful and impressive for such a low-cost drone, and they work well. They’re not as effective as more expensive drones but this is to be expected.

Camera specs for the HS700E are sparse, as are the settings and controls available in the Ophelia Go app, but we can still run through the available information and, most importantly, how the camera performs. The camera and gimbal are made of plastic with the gimbal attached to the drone airframe using four rubber dampers. The camera can be moved up and down through 90° but with no mechanical stabilization, all stabilization for video is a combination of the rubber dampers and electronic image stabilization.

Despite this basic setup, video is free from jello (rolling shutter) and is fairly smooth. But with only this basic stabilization, if the drone is pitching forwards or backwards or is rolling left or right, whether flight movement or to counteract wind, this movement is captured in videos because there’s no mechanical stabilization. And when rolling to counteract wind, the horizon is often captured at an angle in both photos and videos.

The 2.8mm lens has a full-frame equivalent focal length of 14mm that produces a 130° field of view with a fixed f2.0 aperture. The camera features a small 1/3in sensor which can capture video in 1080p at 60fps and 4K at 30fps, while photos are captured as JPEGs in 4K dimensions (3840×2160), which equates to 8.2MP. Exposure is set automatically, but you can adjust white balance, ISO, brightness and saturation. There are also Greyscale (black & white), Bright, and Nostalgic color presets that can be applied to photos and videos.

Image quality is poor overall with strong barrel distortion visible in some but not all images, which depends on the proximity of the subject and the angle of the gimbal. Photos are also soft, and there’s strong chromatic aberration visible. Images of wider scenes are generally better than those of closer subjects, and turning down the brightness in the Ophelia Go app produces a better exposure than the default setting. Video is much more forgiving of these problems, but they remain visible.

The Holy Stone HS700E is competitively priced at $299.99 / £289.99 (opens in new tab) and comes in a kit with everything you need to get started. Once you’ve charged the batteries, put AA batteries in the controller and downloaded the Ophelia Go app to your Android or iOS smartphone you’re ready to go. And don’t forget to register with the FAA in the United States and the CAA in the United Kingdom.

The kit includes the HS700E drone, a foldable controller, two sets of propellers, two batteries, two USB cables for battery charging, a carry case and instructions. You can charge the batteries with a USB charger or plug the cables into a plug socket with USB sockets. The instructions are printed and the booklet is A6 size making it convenient to carry with you when flying and fits neatly into the top section of the carry case with the propellers.

Should you buy the Holy Stone HS700E?

Some beginner drone pilots are fearful of crashing expensive new drones, so a model like the HS700E offers a less expensive option that flies well and offers several useful features. These include GPS positioning, subject tracking modes and return to home functionality. So, from a flight point of view, it’s an impressive drone for the price.

Image quality is, unfortunately, the weak point of the HS700E and could be a deal breaker for some. So, if you’re simply looking for a drone to get to grips with flight, you’re on a tight budget or you simply enjoy the flying aspect of drones, this could be an attractive option. But if you’d like a model that you can grow into as a pilot and require much better image quality, a slightly more expensive model may be a better option.

If this product isn’t for you

At $299.99 / £289.99 (opens in new tab), the HS700E is one of the more expensive Holy Stone models available, and although the drone flies well and provides a range of useful features that belie its budget status, image quality isn’t great. As a drone for learning how to fly without the fear of crashing a more expensive model the HS700E is a good option, but if you’re looking for a drone that’s capable of capturing higher-quality photos and video the DJI Mavic Mini 2 is worth considering.

The Mavic Mini 2 is more expensive than the HS700E for the fly more bundle version, but it’s not a huge leap in cost. This kit costs $599 / £498 (opens in new tab) and includes the drone, a controller, three batteries, a carry bag and a range of accessories. It’s more expensive and not the latest Mavic Mini model, but it remains an attractive option for beginners and more experienced drone pilots alike.