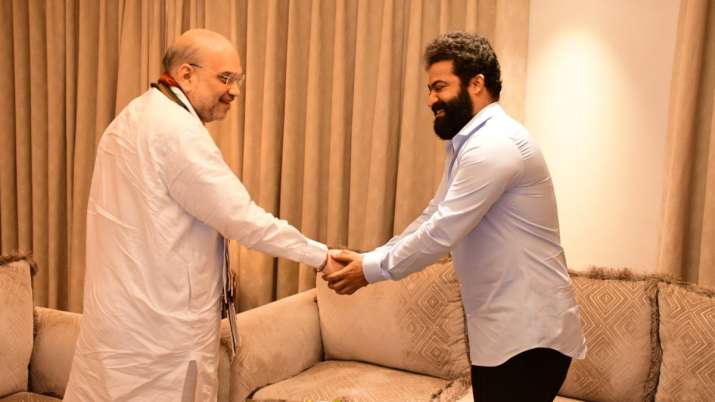 Home Minster Amit Shah had a meet and greet with RRR star Jr NTR in Hyderabad on Sunday evening. Shah shared some candid pictures with Jr NTR on his official Twitter handle and expressed his happiness over meeting the Telugu star. He also lavished praise on Jr NTR and called him the ‘gem of Telugu cinema’. Pics of Jr NTR and Shah from the meeting have been going viral on social media with fans relishing the big moment of their favourite cinema star.

After the huge box office success of the SS Rajamouli directorial RRR, Jr NTR has been at the receiving end of praise not just pan-India, but across the globe. After his meeting with Union Home Minister Amit Shah, JR NTR got praise from the former. The two met in Hyderabad on Sunday. Sharing the pictures with the cinema star, Shah wrote on Twitter, “Had a good interaction with a very talented actor and the gem of our Telugu cinema, Jr NTR in Hyderabad (sic).”

All through the day, speculation was rife among the fans of Jr NTR that he will be meeting with Home Minister Amit Shah. As the images of the two surfaced on social media, the hashtag ‘Amit Shah with NTR’ among several others started to go viral. Shah was in Telangana for a public meeting scheduled to be held in Munugodu. Post his meeting, the meet and greet with Jr NTR took place. In the images shared on social media, Shah and Jr NTR shook hands and were seen conversing with each other. Jr NTR looked handsome in a sky blue shirt and black trousers. According to sources, the meeting took place in a hotel.