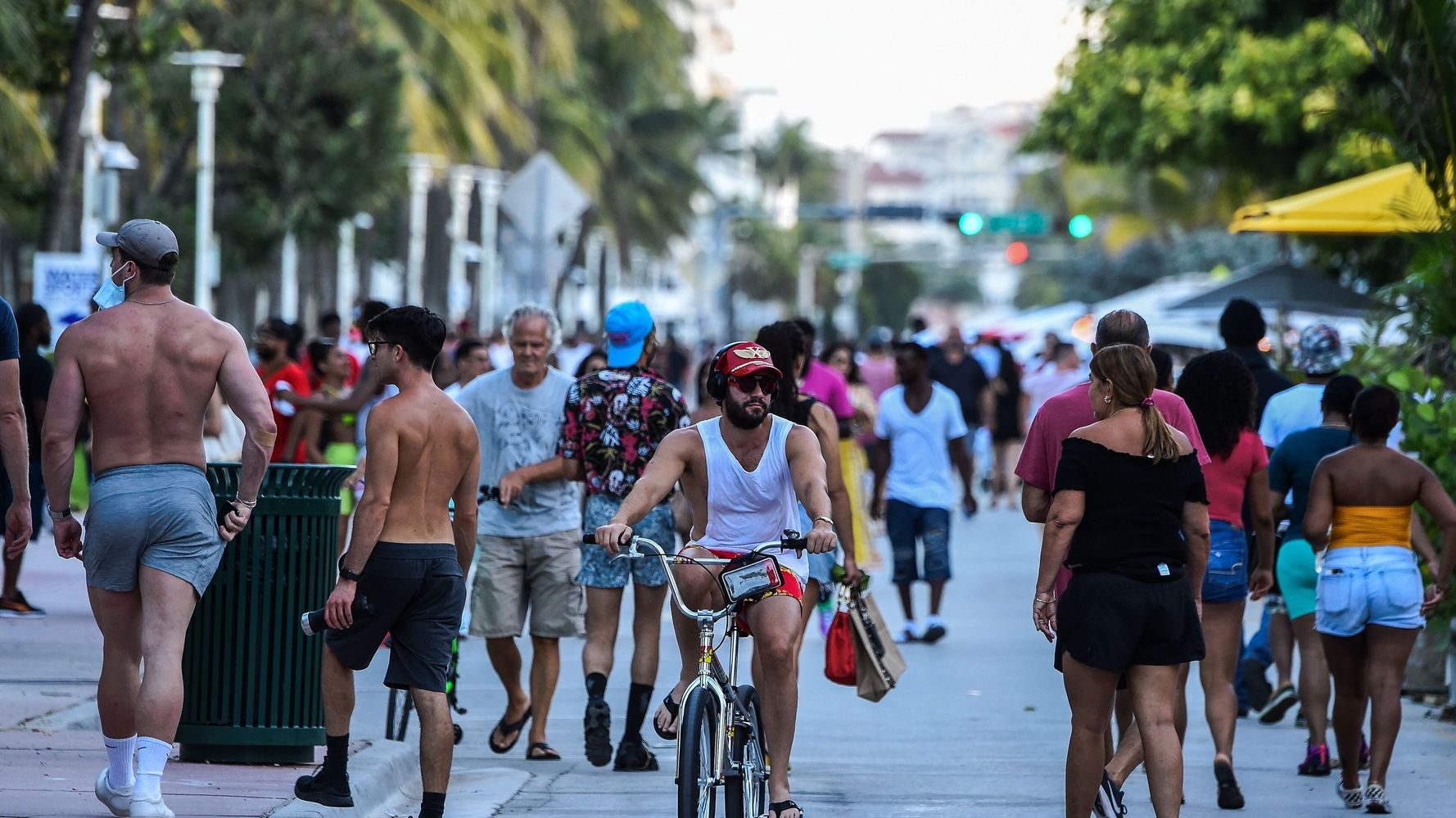 MIAMI (AP) â€” Hospitals rapidly approached capacity across the Sunbelt, and the Miami area closed restaurants and gyms again because of the surging coronavirus Monday, as the U.S. emerged from a Fourth of July weekend of picnics, pool parties and beach outings that health officials fear could fuel the rapidly worsening outbreak.

The seesaw effect â€” restrictions lifted, then reimposed â€” has been seen around the country in recent weeks and is expected again after a holiday that saw crowds of people celebrating, many without masks.

â€œWe were concerned before the weekend and remain concerned post-holiday, as anecdotal stories and observed behavior indicate that many continue to disregard important protective guidance,â€ said Heather Woolwine, a spokeswoman for the Medical University of South Carolina.

Confirmed cases are on the rise in 41 out of 50 states plus the District of Columbia, and the percentage of tests coming back positive for the virus is increasing in 39 states.

Florida, which recorded an all-time high of 11,400 new cases Saturday and has seen its positive test rate lately reach more than 18%, has been hit especially hard, along with other Sunbelt states such as Arizona, California and Texas.

In Miami-Dade County, population 2.7 million, Mayor Carlos Gimenez ordered the closing of restaurants and certain other indoor places, including vacation rentals, seven weeks after they were allowed to reopen. Beaches will reopen on Tuesday after being closed over the weekend.

â€œBut if we see crowding and people not following the public health rules, I will be forced to close the beaches again,â€ the mayor warned.

Hospitalizations across the state have been ticking upward, with nearly 1,700 patients admitted in the past seven days compared with 1,200 the previous week. Five hospitals in the St. Petersburg area were out of intensive care unit beds, officials said. Miamiâ€™s Baptist Hospital had only four of its 88 ICU beds available.

â€œIf we continue to increase at the pace we have been, we wonâ€™t have enough ventilators, enough rooms,â€ said Dr. David De La Zerda, ICU medical director and pulmonologist at Miamiâ€™s Jackson Memorial Hospital.

Officials in Texas also reported hospitals are in danger of being overwhelmed. Hospitalizations statewide surged past 8,000 for the first time over the weekend, a more than fourfold increase in the past month. Houston officials said intensive care units there have exceeded capacity.

Along the border with Mexico, two severely ill patients were flown hundreds of miles north to Dallas and San Antonio because hospitals in the Rio Grande Valley were full.

In Arizona, the number of people hospitalized with COVID-19 topped 3,200, a new high, and hospitals statewide were at 89% capacity. Confirmed cases surpassed 100,000, and more than half of those infected, or over 62,000, are under 44 years old, state health officials said.

Health officials in South Carolina reported over 1,500 new cases Monday. If the numbers keep rising at their current rates, hospitals will probably have to adopt an emergency plan to add 3,000 more beds in places such as hotels and gyms, authorities said.

Alabama has been averaging about 1,000 new cases a day, two or three times what it was seeing in late April, when its stay-at-home order was lifted.

â€œWe set a record for highs over the holiday weekend, and, of course, given the number of people who were out and about over the weekend celebrating, we are certainly concerned about what the next couple of weeks are going to look like as well,â€ said Scott Harris, Alabamaâ€™s health officer.

â€œIâ€™m telling you, West Virginia, if we donâ€™t do that and do this now, weâ€™re going to be in a world of hurt,â€ he said, adding: â€œItâ€™s not much of an inconvenience.â€

The coronavirus is blamed for over a half-million deaths worldwide, including more than 130,000 in the U.S., according to the tally kept by Johns Hopkins University. The number of confirmed infections nationwide stood at 2.9 million, though the real number is believed to be 10 times higher.

New cases per day nationwide have hit record levels of well over 50,000.

Average deaths per day have fallen over the past two weeks from around 600 to about 510, in what experts say reflects advances in treatment and prevention as well as the large share of cases among young adults, who are more likely than older ones to survive COVID-19.

But deaths are considered a lagging indicator â€” that is, it takes time for people to get sick and die. And experts are worried the downward trend in deaths could reverse itself.

The American Medical Association, American Nurses Association and American Hospital Association issued the plea in the absence of a mask-wearing order from Washington and said steps taken early on that helped slow the spread of COVID-19 â€œwere too quickly abandoned.â€

The White House again rejected calls for a nationwide order to wear face coverings, with White House chief of staff Mark Meadows saying on Fox News that it is a matter for governors and mayors to decide.

In New York, once the most lethal hot spot in the country, Gov. Andrew Cuomo said he was concerned about reports of large gatherings over the holiday weekend in New York City, on Fire Island and other places.

â€œI understand people are fatigued,â€ he said. â€œWeâ€™ve been doing this for 128 days. I get it. But it doesnâ€™t change the facts, and we have to stay smart.â€