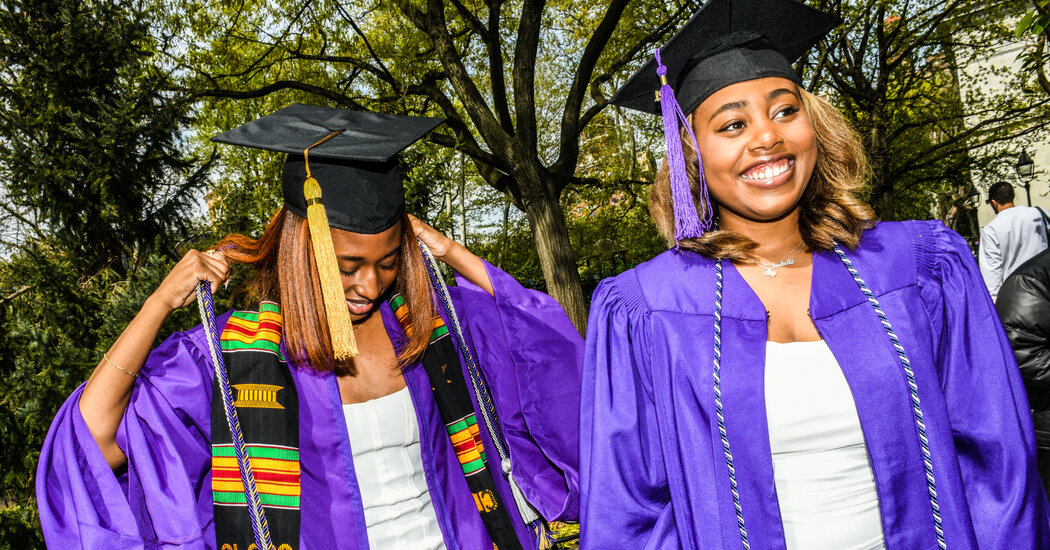 Both Jenny Dhoumo and Lauren Kirshenbaum found out on Instagram.

Ms. Dhoumo, a 24-year-old New York University senior was in a cafe, doing schoolwork, when she saw a friend’s repost from Rolling Stone, announcing that Taylor Swift would speak at the N.Y.U. commencement this month and receive an honorary doctorate of fine arts.

Ms. Dhoumo, who will receive a degree in Media, Culture, and Communications, after a challenging college enrollment that lasted seven years across three universities — she took time off to work and help her family — has been a fan of Ms. Swift since her girlhood in Queens; Ms. Swift’s debut album was the first CD she owned. She’d been fretting about her prospects after graduation. The news seemed auspicious.

“This felt like a weird sign, like a reassurance that things will be OK,” Ms. Dhoumo said at the blooming edge of Washington Square Park, the public space in Greenwich Village that doubles as the university’s quad. “I think her being this icon of my youth, and now being here in my adulthood, she’s coming back to me. Not to relive my childhood, but maybe to connect to my inner child a little.” To say, “Remember who you were back when you were 11 years old, and now you’re here today, this young woman, getting ready for the world.”

Ms. Kirshenbaum, a 22-year-old computer science major who is a self-described “medium fan” of Ms. Swift, marveled at the singer’s persistence and pertinence in her life. “It’s crazy to think of the people I grew up listening to — Miley Cyrus, Taylor Swift, Harry Styles — and how relevant they still are,” she said. “We’ve kind of evolved with them.”

Conversations with a half-dozen graduating N.Y.U. seniors, approached in the park, demonstrated the breadth of their connection with Ms. Swift.

The pop star has had 10 albums hit No. 1 on the Billboard charts since 2006, nearly the entirety of these students’ memory. So this personal connection with her and her songs can be specific.

“She feels deeply. It’s a great talent,” said Senniah Mason, a 21-year-old international relations major from Phoenix, who was having graduation pictures taken with her roommate, Isabelle Jacques, a 22-year-old psychology major from Boston. “If I hear it, I’ll listen to it, but I don’t go out of my way to find it.” She paused. “‘1989,’ I love that album, actually. ‘Safe and Sound,’ ‘Out of the Woods,’ I like those songs too.”

Ms. Jacques echoed this sentiment: “She seems really great and nice. So it will be great to see her talk. But I cannot say I’m dying.”

Ms. Swift’s pervasiveness extends to social media, an omnipresent scroll in which this cohort was the first to be immersed throughout adolescence. She has nearly 300 million combined followers on Instagram and Twitter. Though she follows zero people, and hasn’t posted much recently, her existence on those platforms in these students’ formative years has created a bond for many.

“I think in my generation, in particular, there are these parasocial relationships that are developed with celebrities,” said Ishaan Parmar, a 20-year-old film major from the Bay Area, with a professorial air. “So, people will say Taylor Swift is speaking at my graduation, and they think there is going to be some sort of one-on-one connection with Taylor Swift. In actuality, it’s probably a speech that she may or may not have written, that she’s going to give at Yankee Stadium. But that’s still cool.”

According to an emailed statement from John Beckman, the senior vice president for public affairs at N.Y.U., honorary doctorate recipients are chosen in fields in which the university conducts research and teaches — the sciences, the social sciences, the humanities, the arts, the law, medicine, business, public service. “We select honorees whose talents, achievements and actions will serve as examples for our graduates.” Past recipients have included Sonia Sotomayor, Ang Lee, Bill Clinton, Aretha Franklin, Janet Yellen, Hillary Clinton and Clive Davis.

“The awarding of honorary degrees is a distinction that N.Y.U. takes very seriously,” Mr. Beckman wrote. “We have an extensive selection process that begins with an official nomination in writing by a member of the N.Y.U. community, followed by a vetting process by staff and then review and approval by the university senate, and ultimately by the board of trustees.” When asked about how specific recipients are chosen, he wrote that “the nomination process and the consideration of candidates is confidential.”

The choice of Ms. Swift is not improbable. She is among the most famous people of her generation, and Brittany Spanos, a Rolling Stone senior writer, taught a class on her this year at the Clive Davis Institute of Recorded Music at N.Y.U. (Previous classes in this series have covered Stevie Wonder, James Brown, Aretha Franklin and David Bowie. When asked if the class was related to the honorary doctorate, Mr. Beckman wrote, “There’s no connection, as far as I know; it’s a coincidence.”)

“She has really elevated the conversation about the role of the female pop star,” said Nekesa Mumbi Moody, the editorial director of The Hollywood Reporter. Ms. Moody wrote a chapter on Ms. Swift for the 2018 book “Women Who Rock: Bessie to Beyonce. Girl Groups to Riot Grrrl,” and her interviews with Ms. Swift for The Associated Press date nearly to the artist’s earliest days.

She noted Ms. Swift’s songwriting abilities, her capacity for connecting with her fans and, especially, her zeal. “She has made us rethink how we examine how women songwriters discuss their own heartbreaks,” Ms. Moody said. “She certainly has endured a lot of conversation about that, some of it sexist.”

Though Ms. Kirshenbaum had stopped listening to Ms. Swift’s music in high school, she has returned to it recently, and finds it freshly empowering. “I remember growing up, all those teen magazines, and her being portrayed as someone who dates a lot and then breaks up and writes songs about these people,” she said. “Now, we kind of don’t see her that way. We see more of the complexities.”

Johnson Liu, an animated 21-year-old biology major from Queens, described himself as “not really a fan,” having renounced any brief tween affection for Ms. Swift in favor of heavy metal years ago. But he expressed respect for her capacity to shift genres, to “jump in trying new techniques and approaches,” referring to this quality as “pretty rad.”

When ownership of her back songwriting catalog was sold to Scooter Braun, Ms. Swift was livid. Flouting the system, she’s rerecording and rereleasing her first six albums, allowing her to retain the rights to the new versions, and place a fresh spin on the songs. Her fans have flocked to the albums. Even Swift skeptics, like Mr. Parmar, described this tactic as “a pretty boss move.”

Moreover, all the students interviewed for this article thought that having Ms. Swift as their commencement speaker brought cachet to their school and graduating class, and radiated joy into collegiate careers convulsed by the pandemic. Her appearance felt like a gift, not least because so many people they knew, and even people they didn’t, had approached them about attending.

“People are fiending for those tickets,” Mr. Parmar said. Ms. Dhoumo said that she had heard of people trying to resell them, “but we’re not allowed to.”

“Not that I thought of it,” she added. “But I thought, damn, this is like a really expensive-worthy ticket. It’s like the golden ticket to the candy factory in ‘Willy Wonka.’”

“I got texts from my friends saying, ‘Oh my God,’ and ‘I’m so jealous,’ and ‘Are you selling your tickets?’” Ms. Mason said. “I was like, No. I’m graduating from college. I want my mother there.”

Students receive only two tickets, and the university is trying to enforce its prohibition on selling seats to the event however it can, even by threatening to withhold diplomas from rule breakers. It is also reminding the public that the talk Ms. Swift will be giving is traditionally a five to 10 minute affair, and delivered on behalf of all the honorees. (Susan Hockfield, the president of M.I.T., and Felix V. Mátos Rodriguez, the chancellor of CUNY, will also receive honorary doctorates.)

“Folks should know that Ms. Swift, whom we are very honored to have as one of our honorary degree recipients this year, will be speaking, not giving a performance,” Mr. Beckman wrote. “Of course, her fans are very avid, so I’m not sure even that awareness will curb their ardor.”