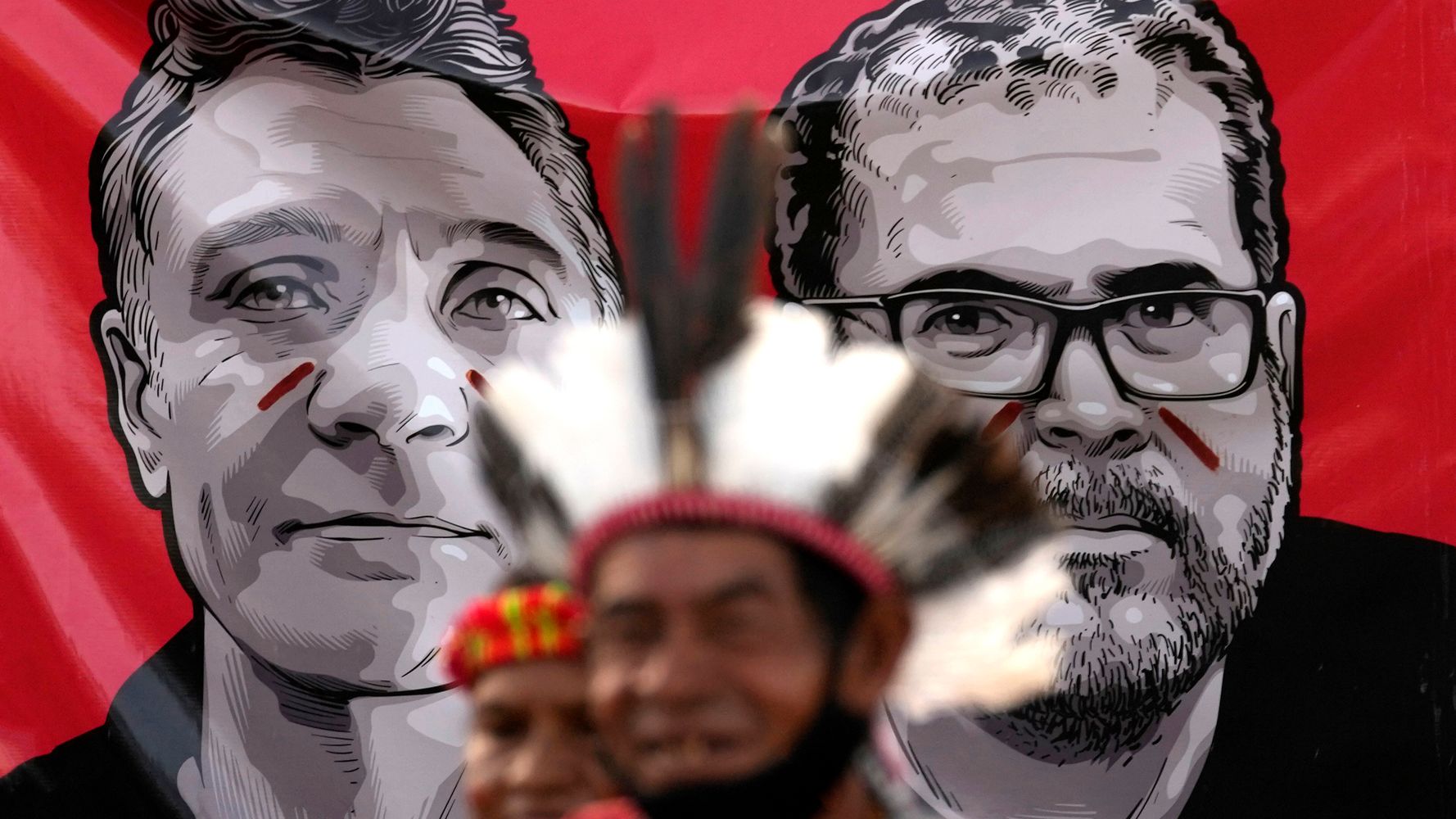 A group of 23 House Democrats sent the Biden administration a letter Tuesday morning asking it to ramp up pressure on Brazil and its right-wing president, Jair Bolsonaro, in the wake of the high-profile killings of a journalist and an Indigenous affairs expert in the Amazon Rainforest.

British journalist Dom Phillips and Bruno Araujo Pereira, a former top official in Brazil’s main Indigenous agency, went missing on June 5 in the Vale do Javari, a vast region of the Amazon near Brazil’s borders with Peru and Colombia. Phillips was working on a book about sustainable development in the Amazon, and Pereira was an ardent defender of Indigenous rights and the environment who had faced threats in the past. They were confirmed dead nearly two weeks later, and police have arrested multiple suspects with ties to illegal fishing interests in the region.

The tragedy drew global attention to escalating violence in the Amazon, where land disputes between Indigenous tribes and illegal miners, fishers and loggers have exploded since Bolsonaro took office in 2019. He began rolling back protections for the forest and tribal lands within it, and has engaged in what some leaders in the region call a “broad and comprehensive anti-Indigenous project.”

Indigenous leaders from the Vale do Javari are now demanding deeper probes into the killings and more accountability for Bolsonaro, and have sought to build global support for their cause in the United States and Europe.

The letter, drafted by Reps. Susan Wild (D-Pa.) and Raul Grijalva (D-Ariz.) and addressed to Secretary of State Antony Blinken, urges the Biden administration to publicly call on Brazil to conduct an “impartial, exhaustive investigation” into criminal organizations that may have been behind the killings, which Indigenous leaders and human rights groups argue resulted from the “carte blanche” Bolsonaro has granted illegal interests to exploit the forest and target its tribes.

The lawmakers also called on the administration to send a delegation to Brazil to meet with Indigenous leaders, a demand tribes have made since the White House began engaging Bolsonaro in climate and environmental negotiations last year.

The meetings, the lawmakers said, would allow Biden officials to understand how the administration could support Indigenous tribes and “formulate a U.S. policy agenda for addressing their concerns.” The letter said the U.S. should work closely with international organizations to “monitor and respond” to human rights violations in the Amazon.

“This human-level tragedy is a symptom of a broader assault on the Amazon rainforest, which is pushing the vast ecosystem to an ecological tipping point,” the lawmakers wrote. “Impunity is the watchword for killings in the Brazilian Amazon, and for the future of the Amazon this case cannot just fade into memory.”

The list of signers includes progressive Reps. Alexandria Ocasio-Cortez (D-N.Y.), Rashida Tlaib (D-Mich.), Ilhan Omar (D-Minn.), Hank Johnson (D-Ga.) and Barbara Lee (D-Calif.). AmazonWatch and Greenpeace, two environmental groups that work in Brazil, helped organize the letter. A copy of the letter and a full list of signers is below.

“President Biden and Secretary Blinken must use the full weight of U.S. diplomacy to reflect our commitment to human rights for all peoples, hold responsible perpetrators of human rights violations and protect the natural resources of our planet that are so critical to fighting the climate crisis.”

It is the latest result of a campaign to generate more international pressure on Brazil over the killings and the broader environmental crisis that precipitated them. The European Union’s parliament this month approved a resolution that similarly called for the Brazilian government to launch an independent investigation into the killings, and to do more to protect human rights within the Amazon.

“The Biden administration must call for an independent investigation into the murders of Dom Phillips and Bruno Pereira,” Grijalva said. “Their deaths follow unusual circumstances as they sought to uncover the truth behind the Amazon’s exploitation and attacks on its Indigenous peoples.”

“For too long, the Bolsonaro regime has weakened environmental and Indigenous protections for corporate profit,” he continued. “President Biden and Secretary Blinken must use the full weight of U.S. diplomacy to reflect our commitment to human rights for all peoples, hold responsible perpetrators of human rights violations and protect the natural resources of our planet that are so critical to fighting the climate crisis.”

Eliesio Marubo, a lawyer for Univaja, a coalition of tribes from the Vale do Javari, traveled to Washington last week to build more international awareness of the current threats facing the Amazon and its tribes. He also sought to explore potential “tools” that could be used to hold Brazil accountable globally. Two Indigenous leaders last year sued Bolsonaro in the International Criminal Court, alleging that his treatment of Indigenous peoples amounted to crimes against humanity. That case is still pending, and Univaja is considering additional legal claims against Bolsonaro, Marubo said.

Marubo met with Reps. Jim McGovern (D-Mass.) and Jared Huffman (D-Calif.). Both lawmakers signed the letter, which together with the EU resolution and recent warnings from U.S. officials to Bolsonaro over his threats to Brazil’s electoral system amount to “a strong sign to the Brazilian government that there might be consequences” for its actions, Marubo said.

Marubo argued that the human rights violations Bolsonaro has allowed may warrant more “concrete measures” from the U.S. in response.

“Support of U.S. congresspeople through this letter is vital so that we can continue to pressure the Brazilian government to protect the Javari Valley,” Marubo said. “President Joe Biden said that protecting the Amazon would guide his administration’s environmental policy, so we hope that this letter will lead to concrete measures in defense of the forest and its people.”

A longtime climate skeptic and opponent of aggressive protections for the environment and tribal lands, Bolsonaro has targeted the Amazon for much of his presidency. He has curbed both regulations and government agencies meant to protect the forest and Indigenous territories. He has approached the Amazon as a source of economic development, and effectively given the green light to illegal miners, fishers, farmers and other illicit interests to enter the forest as they wish. His allies in Brazil’s Congress have sought this year to further open tribal lands to mining, against the wishes of many Indigenous leaders.

Deforestation rates have surged to record levels under Bolsonaro. Illegal invasions of tribal lands have also skyrocketed, often resulting in violent conflicts that have led to steep increases in the number of killings of Indigenous leaders and environmental activists.

The Brazilian government’s response to Phillips’ and Pereira’s disappearances drew outrage at home and abroad. Bolsonaro dismissed the tragedy as a result of an unwise “adventure” into the Amazon, despite the fact that Phillips was an experienced reporter and Pereira was an expert on the region. Univaja, which had warned government agencies that illicit actors were threatening tribal lands in the Vale do Javari months before the killings, also criticized the government’s initial search-and-rescue mission as slow and insufficient.

Bolsonaro’s approach to the Amazon had generated significant global backlash before Phillips and Pereira were killed. The European Union has sought pledges for increased Amazon protections as part of a potential trade deal with a bloc of South American nations that includes Brazil, while Germany and Norway froze payments to the Amazon Fund, an international financing mechanism for forest protection, in response to a record outbreak of fires in the region in 2019.

Biden engaged Brazil in a series of high-level negotiations over new climate change goals and environmental protections last year. He has attempted to craft a financial aid package that would incentivize Brazil to shield the forest from further destruction.

Indigenous leaders and environmentalists, however, warned the White House and former Secretary of State John Kerry, who led the talks as Biden’s special climate envoy, not to trust pledges Bolsonaro made as a result of the on-again, off-again discussions. And they characterized the new commitments as cosmetic changes that would have little benefit for the forest, the climate or Indigenous peoples.

Two days after Phillips and Pereira went missing, Brazilian Indigenous activist Sonia Guajajara urged Kerry to pressure Bolsonaro and Brazil over their disappearances during an event in New York City. Kerry pledged to follow up on the case.

Biden praised Brazil for making “some real sacrifices as a country in the way you’ve tried to protect the Amazon” during his first meeting with Bolsonaro at the Summit of the Americas last month, which occurred just four days after Phillips and Pereira were first reported missing. They did not discuss the disappearances, according to a White House transcript of the meeting.

There will be devastating consequences for the Amazon and Brazil’s Indigenous peoples if Bolsonaro continues on the current path, Marubo said.

“The consequences of continuing on this path are the worst possible, but even if things continue to escalate, our leadership will stand up and fight back,” he said. “We understand that we are in the trenches of the final defense of the forest.”