How A Massachusetts Primary Could Affect The Puerto Rican Debt Crisis 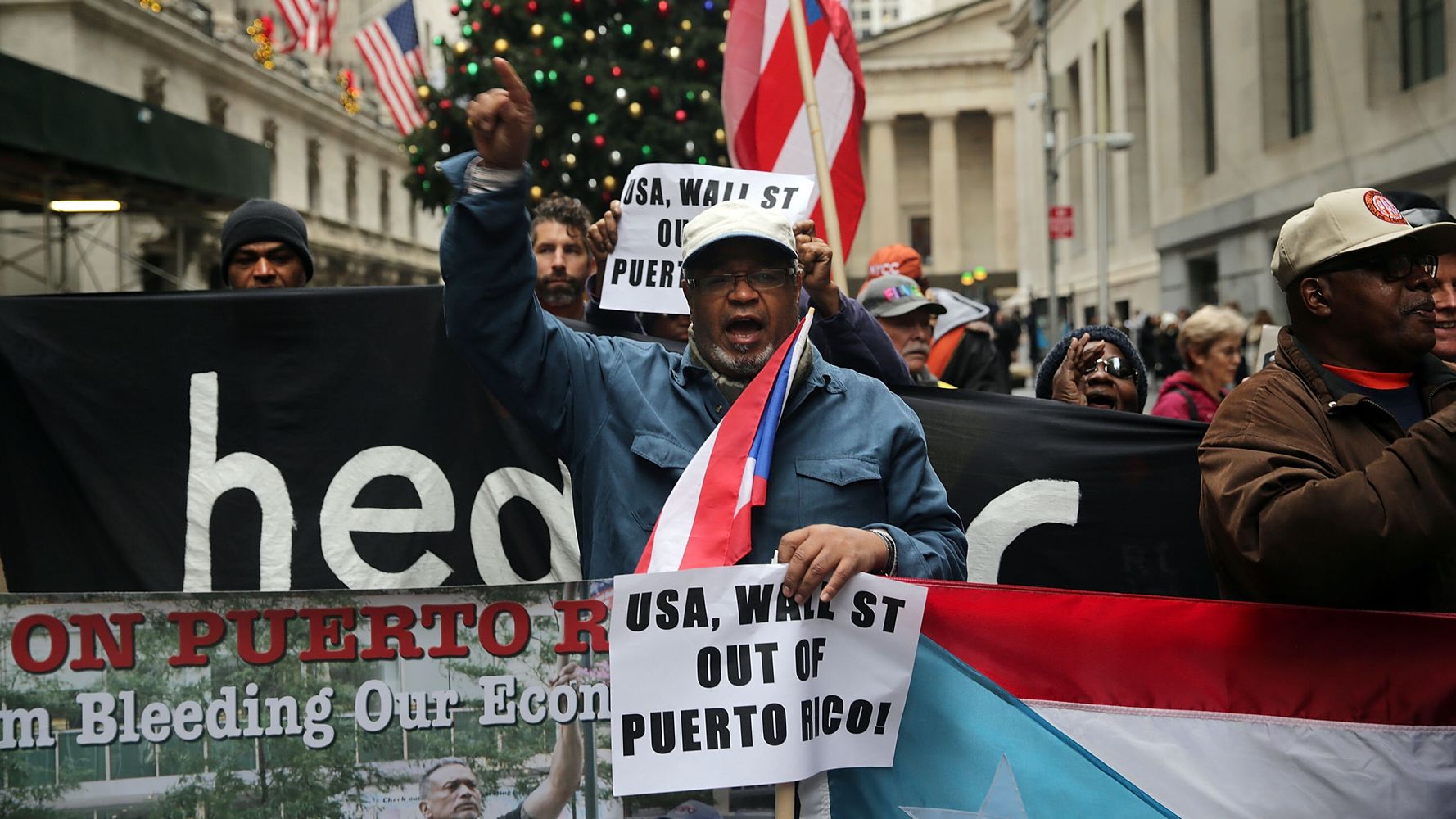 Puerto Rican voters stand to play a critical role in the Democratic primary for Massachusettsâ€™ 1st Congressional District, where progressive Holyoke Mayor Alex Morse is hoping to unseat Rep.Â Richard Neal, one of the most powerful Democrats in Congress.

Nearly one in five residents of the vast House district, which encompasses parts of central and Western Massachusetts, is Latino, the overwhelming majority of whom are Puerto Rican.

But who wins the race could also have an effect on the lives of Puerto Ricans who remain on the island.

Thatâ€™s because Morse and Neal have staked out starkly different stances on how the United States should respond to Puerto Ricoâ€™s decadeslong debt crisis, compounded by a series of deadly hurricanes in recent years and the COVID-19 pandemic.

On his campaign website, Morse declares his support for getting rid of the U.S.-run fiscal oversight board (known in Puerto Rico as â€œLa Juntaâ€) that has veto power over Puerto Ricoâ€™s budget, canceling Puerto Ricoâ€™s debt, and giving the people of the U.S. commonwealth full â€œself determinationâ€ to decide their status vis-a-vis the mainland United States.

â€œAlex understands the urgency of this moment for Puerto Rico, having served people migrating from the Island to Holyoke searching for economic stability,â€ Morse campaign manager Max Clermont told HuffPost in a statement. â€œWe canâ€™t expect to trust Neal to act with urgency on this issue when heâ€™s failed to use his accumulated power through a quarter century to fix a crisis that heâ€™s helped create, nor when heâ€™s had a shared agenda with Wall Street.â€

At least one Puerto Rican Morse supporter said his stance on Puerto Rico was a motivating factor for her.Â Morse â€œunderstands the need for Puerto Ricans to determine our own destiny, and that starts with abolishing La Junta, followed by canceling the debt, and entrusting working committees composed of on the ground grassroots organizations, community and municipal leaders to move the nation forward,â€ said Gladys Franco, a school administrator from Springfield who supports Morse.

Nealâ€™s campaign website has a far glossier section on Puerto Rico, complete with photos of Neal attending Puerto Rican parades in the district.

But while it notes Nealâ€™s efforts to secure additional aid for victims of Hurricane Maria, and his efforts to celebrate Puerto Rican culture through the creation of a Hispanic Heritage Month and the construction of the National Museum of the American Latino, it does not reference the debt crisis directly.

Asked what Neal thought about the fiscal oversight board and restructuring Puerto Rican debt, his campaign spokesperson Kate Norton responded with a statement that did not explicitly address either topic.

â€œRichie Neal believes that the fundamental issue of rebuilding and stabilizing the economy must be the highest priority, and without this resolved the debt will only grow exponentially without any hope for a sustainable future for Puerto Rico,â€ Norton said.

At the heart of the discussion over how the U.S. government should proceed in Puerto Rico is a debate about the effectiveness of the Puerto Rico Oversight, Management, and Economic Stability Act (PROMESA), a bipartisan bill enacted in June 2016.

The billâ€™s proponents cast it as a positive, if imperfect, source of relief for Puerto Rico, which suffers under a $74 billion public debt burden that most experts believe the island will never be able to pay down.

On paper, the bill created a path for Puerto Rico to discharge debt that it was previously unable to write off. Unlike municipalities and public corporations on the mainland, Puerto Ricoâ€™s indebted public entities do not have the authority to declare bankruptcy to restructure their debts.

The problem is that the law also created a seven-person, unelected fiscal oversight board that must approve any write-downs of the debt. Critics charge that the panel, which is stacked with fiscal conservatives like Andrew Biggs of the American Enterprise Institute and corporate executives like JosÃ© CarriÃ³n III, has proved far more willing to keep the burden of fiscal austerity on the islandâ€™s most vulnerable residents, rather than the bondholders who own Puerto Ricoâ€™s debt.Â

Under the boardâ€™s watchful eye, the island has been forced to slash spending on public university tuition and public employee pensions. Those cuts, the continued economic stagnation on the island, and Hurricane Maria in 2017, have accelerated an exodus of working- and middle-class families to the mainland U.S. Due to the hurricane alone, an estimated 100,000 Puerto Ricans migrated to the mainland, including a significant number who have arrived in Holyoke and Springfield.Â

Whatâ€™s more, some of the bondholders to whom Puerto Rico is indebted are â€œvulture capitalistsâ€ who purchased the debt from other creditors at a discount and are now using their deep-pocketed political influence to ensure they are repaid at the original dollar value of the debt.

PROMESA, passed by the Republican-controlled Congress and signed by then-President Barack Obama, had the support of the vast majority of congressional Democrats. Just 12 members of the Senate Democratic Caucus voted against the bill, and 24 Democrats in the House. Neal was not among the two dozen â€œnoâ€ votes.

Former Rep. Luis GutiÃ©rrez, a Chicago Democrat from Puerto Rico who served with Neal for 26 years, told HuffPost unprompted that reelecting Neal is an important step in the fight to restructure Puerto Ricoâ€™s debt on more favorable terms. (GutiÃ©rrez, who retired at the beginning of 2019, voted against PROMESA.)

â€œMassachusetts is going to play a great role in Puerto Ricoâ€™s development,â€ said GutiÃ©rrez, who moved to Puerto Rico after leaving Congress. â€œLet me tell you why: There is no one who was clearer on reducing the debt in Puerto Rico and dismantling this terrible fiscal control board than Richie Neal.â€Â

Asked how GutiÃ©rrez reconciled his confidence in Neal with Nealâ€™s vote for PROMESA, GutiÃ©rrez responded that many progressive lawmakers with whom he works closely voted for the bill at the time, including fellow Puerto Rican lawmakers Nydia Velazquez and JosÃ© Serrano of New York and Darren Soto of Florida. (Another Massachusetts Democrat facing a tough reelection battle, Sen. Ed Markey, voted against the bill; his challenger, Rep. Joe Kennedy III, voted for it.)

â€œNow a lot of people see the damage that [PROMESA] is causing,â€ GutiÃ©rrez said.

Massachusetts state Rep. Carlos GonzÃ¡lez, another Puerto Rican who has endorsed Neal, had a similar defense of Nealâ€™s vote for the bill, claiming that many Puerto Ricans in Western Massachusetts supported the bill at the time.

Four years after its passage, though, Puerto Ricans in Massachusettsâ€™ 1st District have turned against the law, and GonzÃ¡lez expressed confidence that Neal would hear them out.

â€œItâ€™s time to eliminate the PROMESA and eliminate the debt that Puerto Rico has acquired because of vulture capitalists. â€¦ Thatâ€™s an issue that we will be addressing with the congressman as well,â€ GonzÃ¡lez said, though he conceded he had not received any assurances on the matter yet from Neal.

As chairman of the House Ways and Means Committee, Neal does not have direct jurisdiction over Puerto Rico. U.S. policy for the island is usually under the purview of the House Committee on Natural Resources.Â

But as Neal is fond of noting, his nearly 32 years in Congress have afforded him influence that extends far beyond the boundaries of his committee. He has, for instance, the ear of House Speaker Nancy Pelosi (D-Calif.), who starred in one of the Neal campaignâ€™s TV ads.

Morseâ€™s Puerto Rican backers are skeptical, though, that Neal would ever be inclined to side with Puerto Rico against the islandâ€™s creditors given the massive sums of campaign cash that Neal receives from Wall Street. Executives at BlackRock, an asset management fund that holds over $110 million in Puerto Rican debt, contributed $10,000 to Nealâ€™s reelection campaign this cycle through the firmâ€™s political action committee.

Neal â€œcan be trusted to do what the bondholders tell him to do,â€ said San Juan, Puerto Rico, Mayor Carmen YulÃ­n Cruz, who is supporting Morse. â€œHe cannot â€• he absolutely cannot â€• be trusted to fight for the best interests of the Puerto Rican people.â€

Neal has said that his policy positions are not influenced by donors.

â€œIf you contribute to my campaign, you buy into my agenda,â€ the congressman said during a televised debate with Morse on Aug. 17. â€œIâ€™m not buying into yours.â€