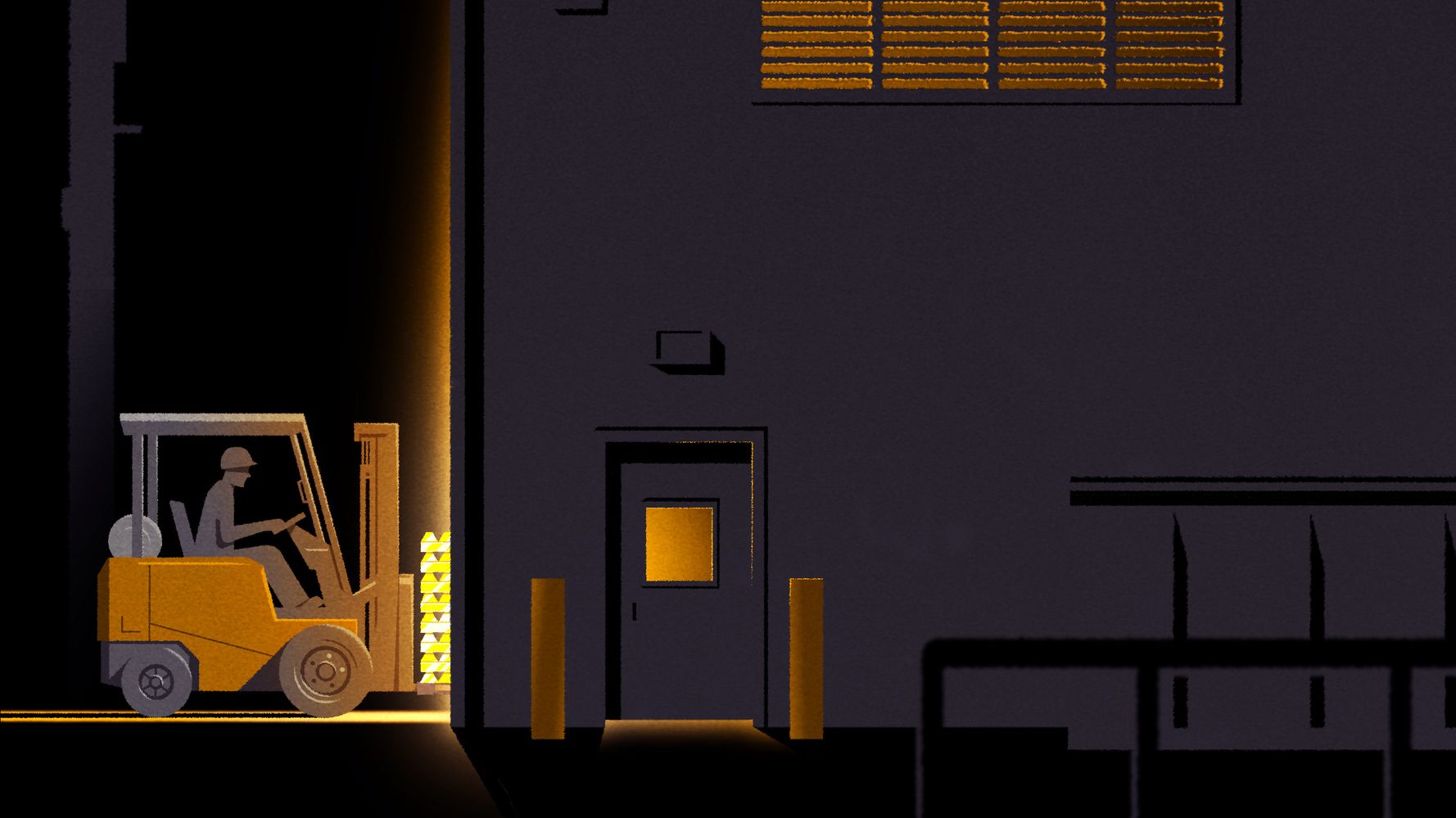 QUEENS, N.Y. ― Behind one of the doors here, at an unmarked Brink’s Global warehouse near John F. Kennedy International Airport, is roughly $30 million in gold bars.

A group of investment advisers from suburban Pennsylvania parked the gold here last May, shortly after buying it from a seller in Europe. And they chose this spot — an ordinary-looking warehouse in Springfield Gardens, a majority-Black, lower-middle-class part of town — for a very specific reason: a provision in the Trump tax cuts that offers breaks to investors who launch ventures in poorer neighborhoods.

“We are actually driving economic activity in economically challenged areas,” Bob Enck, the CEO and founder of the business, boasted in a promotional video. He’s dubbed his scheme the US Opportunity Gold Fund.

The gambit relies on “opportunity zones,” a controversial federal program that lavishes a steep capital gains cut on rich companies and individuals in exchange for investing in a struggling community. Thanks to the 2017 Tax Cuts and Jobs Act, investors who sell financial assets such as stock can defer and reduce their capital gains taxes — which can run as high as 40% — if they use the proceeds to build a business or housing in a federally approved low-income neighborhood.

If the venture lasts more than 10 years, the profits from the new business become entirely tax-free.

The program entails very few requirements to prove that new projects will benefit existing communities. As a result, opportunity zones have fueled the construction of luxury housing, self-storage units and even a superyacht marina, and helped the Trump tax breaks earn their reputation as a bonanza for the ultrarich.

But even in that light, experts told HuffPost the US Gold Opportunity Fund is one of the boldest applications of the program they have ever encountered.

“How on earth is this creating societal value?” said Brett Theodos, a senior fellow at the Urban Institute who has criticized the overly broad use of opportunity zones.

And they couldn’t be sure whether the fund is ingenious or harebrained.

After all, the IRS did lay out a few basic conditions for using opportunity zones: a set of technical rules, and a rule aimed at ventures that meet all the technical rules but conflict in a glaring way with the spirit of the law. The agency even offered examples of ventures that would fail the so-called anti-abuse rule. One scenario consists of turning a vacant lot into a self-pay parking lot while investors wait for the land to go up in value.

Another example is a one-person business that warehouses gold while investors wait for the price of gold to increase in value.

This poses an obvious challenge for the US Gold Opportunity Fund — a two-person business that’s warehousing gold while investors wait for the price of gold to increase in value.

At least, that is how the fund’s founder is marketing the fund to potential investors. Enck did not respond to multiple calls and emails for this story. But in a series of undated videos on the company’s website, he pitches potential investors on a business model that bears a shocking resemblance to the one the IRS declared improper: sitting on gold for at least 10 years, then selling it tax-free.

“We want to drive economic development in opportunity zones, and within that construct, we are offering a fund that invests in physical gold,” Enck says in one video. “If anyone has interest in stimulating economic activity in an opportunity zone, and if you like gold as an investment, we should talk.” The ideal investor, he says in another video, is someone who “buys into the thesis that gold is a good long-term investment.”

The fund raised $30 million from unidentified investors in December 2020, according to a disclosure the group filed with the Securities and Exchange Commission. Six months later, it contracted with StoneX, a global commodities mover, to buy and deliver $30 million in gold bars from a seller in Europe to the warehouse in Queens. A StoneX executive hailed the delivery as “an important part of our broader social responsibility initiatives.”

“How on earth is this creating societal value?”

– Brett Theodos, a senior fellow at the Urban Institute

On hearing a description of the US Gold Opportunity Fund and its airport-adjacent gold stash, Theodos said: “Oh, for the love of God.”

To Theodos, this kind of wild scheme exists because the government has lost its ability to meaningfully police wealthy taxpayers, and because Congress required virtually no disclosure when it created the opportunity zone program.

“We need the IRS to be adequately resourced,” he said. “We need to know where opportunity zone projects happen, where they’re located, in real time, so that we can understand and vet what this program is accomplishing. [And] we need a legitimate certification process, which Treasury could undertake right now, to limit the program to mission-minded investors.”

Other experts agreed that the fund walks right up to the line of what’s allowed under the IRS rules for opportunity zones ― if it doesn’t simply step over it.

“My first thought was, ‘Wow, somebody is really setting themselves up and walking right into the anti-abuse example. That’s an interesting choice!’” said Jessica Millett, who specializes in opportunity zone investments at the New York law firm Duval & Stachenfeld.

The IRS singled out gold-buying businesses in its regulations because, in the agency’s words, they are “merely speculative in nature [and] not expected to increase economic activity.” Millett’s guess is that the US Gold Opportunity Fund offers something besides physical gold, such as financial consulting, in order to stay qualified as an opportunity zone business.

But the line the fund is walking is extremely fine, Millett said.

“They’re definitely saying, ‘Hey look, you’re going to own all this gold if you invest in the fund!’” she said. “It gives me pause.”

Probably to preempt those criticisms, Enck has claimed that actually, the company’s purchase of gold helps create a flurry of economic activity in disadvantaged neighborhoods.

“We’re really trying to make sure we’re driving economic development,” Enck says in another promotional video. “We’re gonna move gold back from overseas [and] all the economic activity that [goes] along with that. Storing, securing, guarding, assaying, weighing, all the kind of things that have to happen with gold bars, will be done now, in the United States, in an OZ.”

But the economic impact was difficult to detect on the ground in Springfield Gardens, a tiny neighborhood bounded by some small parks, the Belt Parkway and the razor-wire fencing that surrounds JFK International.

From the sidewalk, the Brink’s warehouse where the gold arrived did not look like it had undergone any recent upgrades or expansions. (And why would it, when $30 million in gold bars can fit on a kitchen table?) Approached by a reporter, the driver of an idling Brink’s truck waved her away in annoyance and went back to eating his snack.

“We are actually driving economic activity in economically challenged areas.”

– Bob Enck, CEO and founder of the US Opportunity Gold Fund

Most of the economic impact has likely accrued to whoever gave Enck and his team $30 million. Because there were special tax liability reductions for investors who used the opportunity zone program before 2021, the fund may have already helped customers avoid more than $1 million in federal taxes.

At launch, the fund had a grand total of just two employees: Enck and its chief operating officer, Scott Victor. Its website also lists a president, John Pallat, and an affiliated member, Alex Joslin.

All four men previously worked at Equinox Funds, an investment manager where Enck was CEO and president from 2007 until 2021. In 2016, the SEC sanctioned Equinox Funds for misrepresenting how it calculated its management fees, among other “material misstatements and omissions,” allowing Equinox to overcharge customers by $5.4 million. Equinox paid a $400,000 fine and refunded more than $5 million to investors, and the fund has since been reorganized under new leadership.

For their gold fund venture, Enck and his partners are receiving legal guidance from Dechert, a well-regarded white-shoe law firm, and auditing by Novogradac, an accounting firm of equally good repute. Novogradac did not respond to a request for comment. Dechert did not reply to HuffPost’s inquiries or make the attorneys who advised the Gold OZ Fund available to comment. A few hours after HuffPost first contacted Dechert and Brink’s, the references to disappeared from the “about us” section of the Gold OZ Fund’s website.

The spokesperson for Brink’s did not respond to questions about whether it hires extra personnel or makes physical improvements to its warehouses when it handles a particularly valuable deposit, in this case or in general.

So HuffPost asked people around Springfield Gardens whether their new neighbor — $30 million in gold bricks — was having a positive impact.

“I really can’t say,” said David Mendez, the owner of Bugging Out 4 Burgers, when asked if his restaurant had seen a substantial increase in foot traffic. “Most of our customers are from the community.”