How can Russia help Pakistan make the best of the SCO Summit? | The Express Tribune 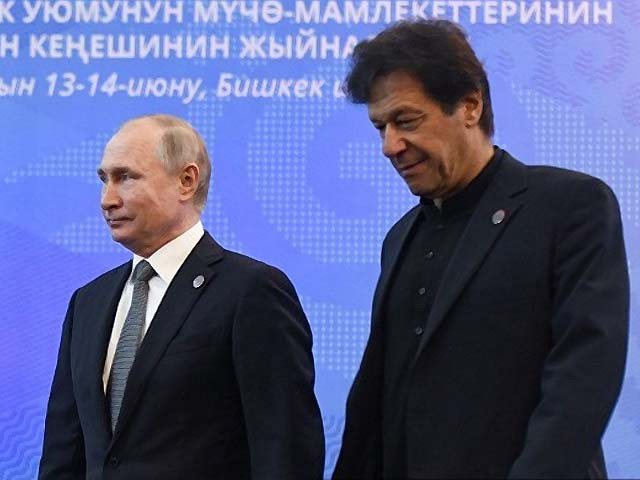 The Shanghai Cooperation Organisationâ€™s (SCO) heads of state summit will be held in the Tajik capital of Dushanbe from 16-17 September. Itâ€™s obvious that post-withdrawal Afghanistan will be at the top of this blocâ€™s agenda. Thereâ€™s no better time for Pakistan to present itself as a responsible stakeholder in its neighbourâ€™s stability, which can positively reshape perceptions about its role in that conflict and everything that will come afterwards. Pakistan must also prioritise the defence of its regional security interests by taking the lead to raise awareness about the multitude of Afghan-emanating terrorist threats and proposing realistic solutions for tackling them.

The three primary terrorist-driven threats to its interests are ETIM, ISIS-K, and TTP, all of which could contribute to intensifying the Hybrid War of Terror on CPEC, whether on their own prerogative or at the behest of a foreign patron. These groups understand that all attacks against this series of megaprojects, especially those that target Chinese nationals, will attract disproportionate attention to their respective causes and facilitate hostile information forcesâ€™ efforts to negatively manipulate perceptions about Pakistan. The challenge is therefore three-fold: prevent the infiltration of Afghan-based terrorists; pre-emptively thwart attacks from those already present in the country; and properly manage perceptions about Pakistan.

The first challenge has already largely been addressed by fencing most of the border and building plenty of forts along it, the second is presently being tackled by the countryâ€™s security services, and the third remains a struggle as itâ€™s always been. The SCO can help Pakistan improve the effectiveness of its three-pronged anti-terrorist strategy. Regarding the first challenge, Islamabad must see to it that the bloc condemns the three previously mentioned terrorist groups that are active in Afghanistan. They should also make their formal recognition of the countryâ€™s de facto Taliban-led government conditional on it successfully suppressing all three organisationsâ€™ efforts to exploit Afghan territory for attacking third countries, especially the TTPâ€™s.

The Taliban appears to remain somewhat ideologically sympathetic to that terrorist group so pressure should be put upon it by the SCO to not slack in its security responsibilities. Any of the TTPâ€™s and the other two terrorist groupsâ€™ possible attacks in Pakistan would immediately impact on Chinaâ€™s security as well seeing as how important CPEC is for its grand strategy so the Peopleâ€™s Republic could attempt to dangle the carrot of large-scale economic and financial assistance to the Taliban in exchange for it more actively thwarting their plans. None of the SCOâ€™s members should officially object to this even if some suspect that a few in India might secretly want those groups to intensify the Hybrid War of Terror on CPEC for zero-sum reasons.

Unlike the recent UNSC Resolution on Afghanistan, the SCOâ€™s joint statement should therefore explicitly condemn all three organisations in order to signal the blocâ€™s unity in confronting terrorism, separatism, and extremism per its charter. This segues into how the SCO could help Pakistan address the second of the previously mentioned challenges related to pre-emptively thwarting attacks from those terrorists who might have already infiltrated into the country. One of the practical outcomes of the upcoming summit should ideally be the optimisation of the blocâ€™s existing anti-terrorist intelligence sharing mechanisms between its members. Closer coordination is needed in order to ensure collective security against these unconventional threats.

Regarding the last of the three challenges that were enumerated above, Pakistanâ€™s active participation in this monthâ€™s SCO Summit can serve to positively reshape perceptions about its role in the conflict and everything that will come afterwards. Islamabad must get its institutional partners to publicly acknowledge its anti-terrorist sacrifices over the past two decades and the game-changing effect that its diplomacy had on getting the US to clinch February 2020â€™s deal with the Taliban to withdraw from Afghanistan. New Delhi probably wouldnâ€™t want to praise its neighbour for domestic political reasons as well as its self-interested desire to perpetuate negative stereotypes about Islamabad but Moscow might get it to agree for pragmatismâ€™s sake.

As the reader likely already realised, India might seek to obstruct Pakistanâ€™s plans during this monthâ€™s summit which is why Russiaâ€™s role will be crucial to ensuring that New Delhi doesnâ€™t succeed. To be absolutely clear, Russia is not in any way â€œagainstâ€ India and has always had its decades-long special and privileged strategic partnerâ€™s best interests in mind, but Moscow has recently restored balance to its South Asian strategy and also has more pragmatic relations with the Taliban than any country apart from Pakistan despite still officially designating the group as terrorists. The Kremlin can therefore facilitate the incipient rapprochement between India and the Taliban in exchange for New Delhi agreeing not to sabotage the SCO Summit.

Itâ€™s in Russiaâ€™s objective interests to see that summit succeed, especially with respect to Pakistanâ€™s envisioned anti-terrorist outcomes that were explained earlier. Moscow resents that the recent UNSC Resolution on Afghanistan ignored most of its proposals which is why it abstained from voting for it so Russia wonâ€™t want that to happen a second time around in the bloc that it and its Chinese strategic partner jointly co-manage. India also has an objective interest in retaining excellent ties with Russia not only for the purpose of encouraging the Kremlin to facilitate its incipient rapprochement with the Taliban but also more generally with respect to relying on the Eurasian Great Power to improve the South Asian stateâ€™s balancing capabilities vis-a-vis the US.

It would therefore be surprising if India unilaterally sabotaged Pakistanâ€™s anti-terrorist efforts at the SCO Summit since doing such would also undermine its Russian allyâ€™s interests as well, which would ultimately be to New Delhiâ€™s grand strategic detriment as touched upon in the preceding sentence. This observation shows how the growing convergence of interests between Russia and Pakistan as a result of their rapid rapprochement over the past few years has bolstered Islamabadâ€™s strategic security since it deters New Delhi from undermining those interests that its neighbour now shares with Moscow. Russiaâ€™s endorsement of Pakistanâ€™s role in improving the situation in Afghanistan is also globally influential and can positively reshape perceptions about it abroad.

The takeaway is that the SCO Summitâ€™s anti-terrorist successes will be dependent on proactive Pakistani proposals and Russiaâ€™s pragmatic efforts to ensure that India doesnâ€™t sabotage their promulgation for zero-sum ends that would also undermine Moscowâ€™s related security interests. Pakistan and Russia are veritably the two most influential external stakeholders in Afghanistanâ€™s stability right now due to their excellent relations with the Taliban so itâ€™s naturally incumbent on them to take the lead in this respect during this monthâ€™s summit and cooperate as closely as they can exactly as their leaders envisioned during last weekâ€™s phone call. There are plenty of reasons to expect this to happen since they share many of the same interests nowadays.