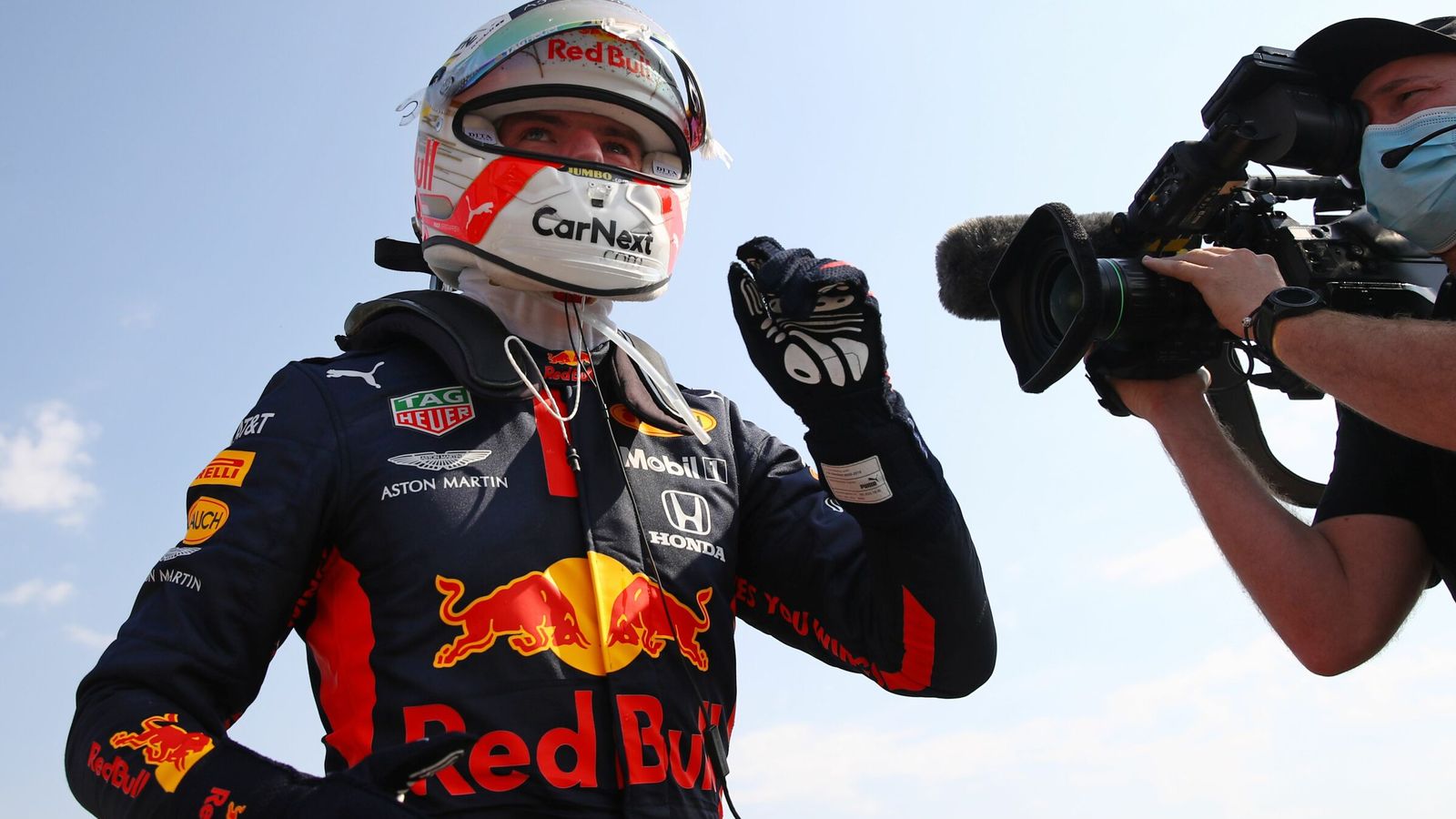 With Verstappen single-handedly bringing the 2020 fight to Mercedes, Sky F1’s Martin Brundle has said those words a fair few times during race commentary this season.

But on Sunday, they were more pertinent than ever.

For Verstappen, against all odds, converted that one-man crusade into a victory at the 70th Anniversary GP, ending Mercedes’ unbeaten start.

And this at a Silverstone track where Mercedes were over a second faster than Red Bull the day before, where they were dominant on race pace last weekend, and where they had only been beaten once since 2013.

How did Max and Red Bull serve up the biggest shock of the season so far?

The starting tyre: A hard, but crucial decision

With Mercedes streaking clear of the field in qualifying, pole-sitter Valtteri Bottas and Lewis Hamilton would surely have been expecting another head-to-head battle for the victory on Sunday. Particularly with their rival Verstappen down in fourth, and behind the Racing Point of Nico Hulkenberg on the grid.

But Verstappen did have an ace up his sleeve, one which he was surprised Mercedes didn’t possess themselves given their big advantage on Saturday. He would be starting the race on the hard tyre thanks to a Red Bull gamble in Q2, while everyone else in the top-10 was on the mediums.

That was the first big call Red Bull got right, and one that lay the groundwork for a sensational win.

“I don’t think it was a thought. But our assumptions were that we wouldn’t be as bad [at the start of the race].”

Toto Wolff on whether Merc should have started on hard tyre

While Verstappen didn’t feel the benefits of the harder, more durable rubber early on, he did pass Hulkenberg immediately and it was evidently clear that the Mercedes weren’t pulling away from the Red Bull as they had the week before. Even worse for Mercedes, Bottas received this radio message on lap six – which was a sign of things to come:

Verstappen was now faster than both Mercedes, and into DRS range of Hamilton. Red Bull, knowing they were running longer than Mercedes, instructed Max to “pull back”. It wasn’t well-received.

“Mate – this is the only chance of being close to the Mercedes’, I’m not just sitting behind like a grandma!”

It was a reply of passion from a driver who, despite his best efforts, hadn’t truly been in contention for a win all season. And after Bottas and Hamilton then pitted, an unlikely Max victory looked like more and more of a possibility.

Advantage Verstappen as Mercedes tyre out

Mercedes pitting onto fresh hards while Verstappen was running on the same, but older, compound, would normally result in the W11s eating into Red Bull’s new race lead. But that simply didn’t happen.

“I was putting the pressure on and they boxed – from then on my tyres just picked up and I had even better pace,” explained Verstappen to Sky F1 after the race. “So I just kept going and going.”

Mercedes, meanwhile, had blisters on their tyres soon after fitting them, and Hamilton in particular was struggling, dropping out of range to Verstappen even if he decided to pit.

Verstappen did so after a few laps of pushing for more pace on that hard tyre, leading to the next pivotal moment in his race.

Max has the lead, as Bottas bemoans strategy

Red Bull’s pit crew are so often speedier than anyone on the grid but Sunday’s first stop was around a second slower than usual, which meant Bottas just crept into the lead. But struggling on his tyres, that lasted only a matter of corners as Verstappen darted around the outside of Woodcote with a new medium tyre advantage.

This was the first point of the race which frustrated Bottas, who was adamant he could have had a race win, let alone second place, on Sunday with more favourable strategy.

“When Max got ahead of me I had no information to push harder, so we ended up pretty much side-by-side when he pitted,” he said. “If I knew before that I could pick up my pace, I had my pace in hand.”

Bottas’ view was that track position was crucial, and the fact he was matching Verstappen soon after his stop seemed to back that up. If Bottas was given the hurry up by Mercedes, would Max have been able to pass him?

Verstappen was just 2s ahead of Bottas when both pitted again at the same time, onto hards, launching Hamilton into a race lead.

The finishing touches to an F1 upset

The final stint was Verstappen’s most comfortable, and one where it became clear that he was now the race favourite – even with Hamilton more than 10s up the road.

“I never really had any trouble with my tyres so as soon as Valtteri started accelerating, I was accelerating,” explained Max. His lead was extending by around 0.5s per lap to Bottas.

“Then they told me Lewis might go to the end so I had to speed up a bit more, but then quite quickly it was over a second I was gaining [a lap] I felt comfortable, and then he boxed.”

From there, it was pretty much mission accomplished for Max – and the fact Mercedes were allowing their two drivers to race behind would have been more music to the ears.

“A win should have been possible today.”

“Could we have done better? For sure. But I still think they would have won.”

“The win was not there for us. Clearly we were not the fastest car.”

In another blow to Bottas, he was then a sitting duck for Hamilton who, posting fastest laps on his new tyres, easily overtook his team-mate for second place.

Mercedes reacting to Verstappen with their lead car, turned out to be his downfall.

“The last stint was too long for me, while Lewis went longer in the middle stint which worked out better,” said the Finn. “For me, it was sub-optimal.”

Hamilton, meanwhile, thanked his team for his strategy – adding that he was “really grateful” for a longer second stint. He is still 30 points clear in the championship, but now has Verstappen as his closest rival, rather than Bottas.

Given Mercedes’ big one-lap advantage at Silverstone and the fact they have been pretty comfortable throughout every qualifying session and race so far – until Sunday – it would be foolish to suggest they are no longer F1’s dominant force.

But the 70th Anniversary GP did at least show that the team, who have been asked all season whether they could last the year undefeated, can be vulnerable. Hot temperatures, with softer tyres, brings Red Bull back into play.

“We’ve seen we’ve had this deficit in very hot temperatures,” said team boss Toto Wolff. “Today we got confirmation. That is something we need to get on top of and understand.

“Clearly you can say we’ve been an outlier to the whole field. We were not quick enough and the gaps have shrunk.”

With a Spanish GP in the middle of August unlikely to bring with it any chilly respite, Red Bull – who for the first time this season seemed to get the most out of their package – can look ahead with promise.

“Let’s say last week we would have won because of their tyre blowouts, OK it’s a win but it’s not very satisfying,” said Verstappen. “Today was very satisfying because we did beat them on pace.”

Verstappen also urged his team to pick up the pace in qualifying – while Hamilton insists he’s eager for the challenge.

“I want to have races where they’re challenging like today so I’m excited to watch this race,” added the six-time champion. “Obviously the Red Bull seems to be quite close in race conditions to us and obviously today is stronger so it shows they don’t have as bad a package as perhaps people had said in the past but I think it’s good.

“It will be interesting to see the progression through the rest of the year and I definitely will not overlook them.”