How to make the EUâ€™s migration pact more humane 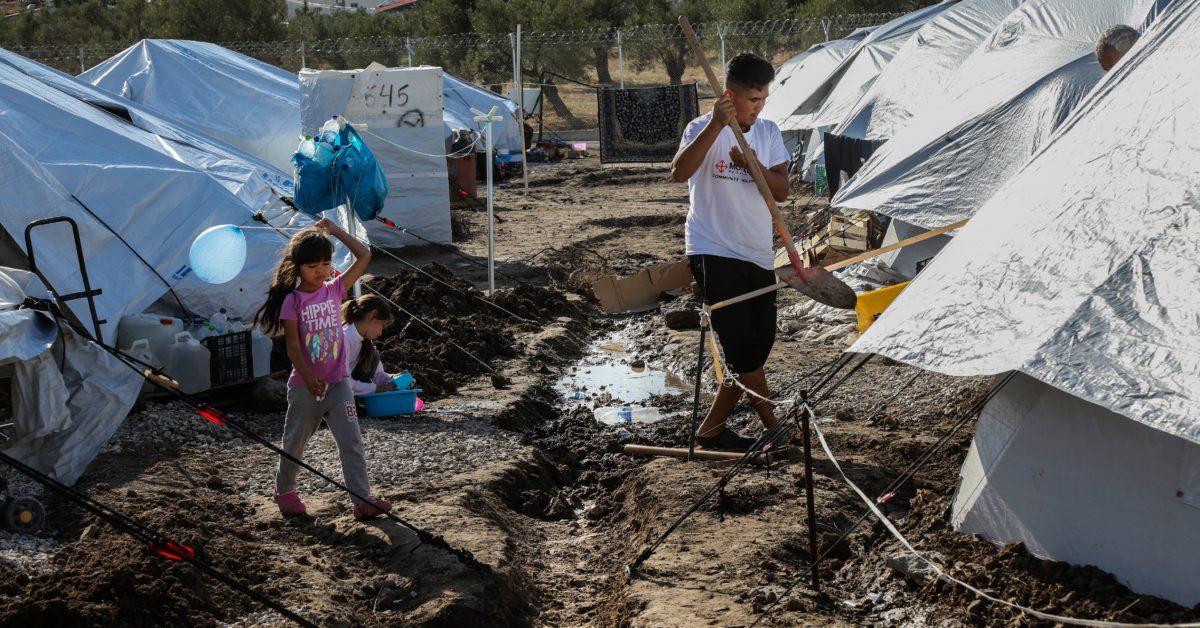 Imogen Subdery is the International Rescue Committeeâ€™s director of policy and advocacy in Europe.

As Europe tries to find agreement on a new EU migration and asylum pact, some 15,000 refugees and asylum seekers remain stuck in camps on the Greek islands with little hope and under increasingly dire conditions.

On the island of Lesvos, a new camp â€”Â built after Moria, notorious for its inhumane conditions, was destroyed in a fire in September â€”Â offers little shelter or comfort. The camp is prone to flooding, and tents there are battered by strong winds. There is no electricity and hardly any running water, forcing many to bathe in the cold sea.

This is just the latest in a long string of indignities faced by people who, having risked their lives to reach Europe in search of safety, instead find themselves trapped in dangerous conditions and an endless cycle of bureaucratic delays and containment.

As Fariba, a 32-year-old woman from Afghanistan now stranded on the island of Samos with her two young children, told us: â€œIn Afghanistan, we were afraid of suicide bombers and I thought leaving there would be my salvation. But it is worse here.â€

This has critical ramifications for the physical and mental health of refugees in Greece, as the International Rescue Committee found in a new report. Three quarters of the people the IRC assisted across the islands between March 2018 and October of this year reported experiencing symptoms of mental health conditions. Alarmingly, of the 904 people who received IRC counseling, more than one in three reported experiencing suicidal thoughts, while nearly one in five said they had attempted to take their own lives â€” either on their journeys to Greece or during their time on the islands.

Perhaps the biggest tragedy is that this suffering could have been avoided. The sense of hopelessness and despair experienced by people trapped in camps on the Greek islands can be traced back to concrete political decisions and policy gaps made by the EU and national governments.

The EU Pact on Migration and Asylum presents policymakers with a golden opportunity to fix this broken system. Yet, once again, it appears that member countries are struggling to agree on even the smallest steps toward these urgent reforms.

Worse still, they look set to repeat the same mistakes, including further entrenching policies of containment along Europeâ€™s borders that will only lead to greater human suffering.

Instead, European leaders should be working to end overcrowding on the islands, open more legal pathways for asylum seekers to make claims in Europe and create fair and meaningful mechanisms for solidarity among EU countries.

The European Commissionâ€™s proposals to introduce pre-screening at the EUâ€™s borders risks exacerbating the stress and suffering experienced by new arrivals and result in more camps, not less.

The immediate priority should rather be to end this misery by acceleratingÂ the safe transfers of people from hotspots. This includes increasing transfers to more appropriate accommodation on the Greek mainland and scaling up the relocation of people to other EU member countries. The most vulnerable â€” including unaccompanied children, families with children and those with health conditions â€” must be prioritized until a more permanent, fair and workable relocation mechanism is in place.

Anyone who remains trapped on the islands must be provided with safe and dignified accommodation, with emergency and alternative arrangements in place for vulnerable groups. Everyone must have access to essential services such as water and sanitation so they can properly protect themselves from COVID-19, and quality health care â€” including mental health care â€” must be guaranteed for all.

European leaders also have to rethink the migration pactâ€™s current focus on preventing people from reaching European soil through irregular channels. This is neither fair nor effective, especially if they are not providing more safe and legal pathways for those in need of protection.

Under the EUâ€™s watch, the Mediterranean Sea has become a graveyard for people who have risked their lives to seek protection in Europe. If it hopes to prevent more needless deaths, the EU must seize this opportunity to open new legal routes to safety and expand existing ones.

It is also critical that EU countries roll over their commitments to resettle 30,000 refugees in 2020 â€” a target that wasnâ€™t met, in part due to the pandemic â€” into 2021, while also committing to at least 35,000 additional places. The EU has more than enough wealth and resources to accept our calls to resettle 250,000 refugees by 2025.

This year, two tragic events â€” the global pandemic and the September fires that destroyed Moria camp on the island of Lesvos â€” sparked action from a coalition of EU countries that volunteered to relocate more than 500 children from the Greek islands. This effort proves this is not a pipe dream to ask that countries do more. Political will and coordinated action can transform the lives of people held in the island camps.

Now is the time for Greece and the EU to continue in this spirit. They must shift away from a crisis-driven, ad hoc approach and embrace one that meets the needs of migrants and fits the realities of migration, both within and beyond the EU.

Negotiations on the migration pact are the final chance for the European Parliament and national governments to take the EU down a different path. This will require real political courage but, done correctly, it could establish the fair, humane and predictable system the EU desperately needs and finally put a definitive end to the cruelty of containment.