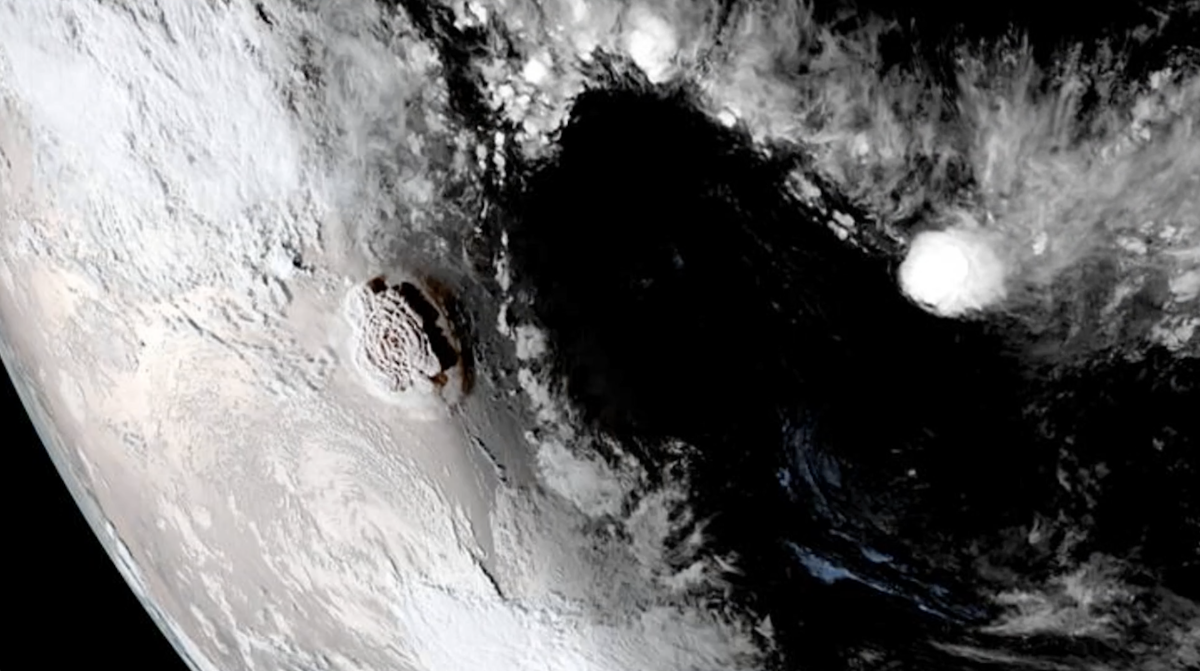 A powerful underwater volcano eruption in Tonga on Saturday (Jan. 15) was captured as it happened in stunning images from an Earth-watching satellite, showing the sheer power for the explosive event in the South Pacific.Â

The volcano eruption on the island of Hunga Tonga-Hunga Ha’apai is visible as a spectacular explosion in views from the GOES West Earth-observing satellite operated by the U.S. National Oceanic and Atmospheric Administration (NOAA). A video of the eruption shows a vast plume from the volcano rising high into the atmosphere like a giant mushroom during the eruption as a shockwave extends outward from Hunga Tonga-Hunga Ha’apai, one of the 170 islands that make up the South Pacific kingdom of Tonga.Â

The eruption spawned a 4-foot tsunami that hit Tonga’s capital of Nukuâ€™alofa, which is about 40 miles (65 kilometers) south of the volcano. A sonic boom from the eruption was heard across the Pacific Ocean, reaching as far away as Alaska, according to the Associated Press.Â

Nukuâ€™alofa was reportedly covered in a thick film of volcanic dust, according the AP. There have been no official reports of injuries or damage from Tonga’s capital, but its internet access was interrupted by the event, Â the AP added.

The volcano on Hunga Tonga-Hunga Ha’apai first erupted on Dec. 20 and then exploded with a massive eruption on Jan. 13, which was also spotted by GOES West, NOAA officials said in a statement. That eruption was seven times more powerful than the December event and sent a huge plume of ash and gas over 12 miles (20 kilometers) into Earth’s atmosphere.

Saturday’s eruption also sent an ash plume to an altitude of nearly 12 miles, New Zealand Prime Minister Jacinda Ardern told the AP. New Zealand officials hope to send military surveillance flights over the volcano on Monday to assess its status, followed by aid and supplies for Tonga, where water supplies may be contaminated, Ardern added.Â