Australia
Share
Facebook
Linkedin
Pinterest
Mix
Email
Telegram
Russia has announced yet another limited cease-fire and the establishment of safe corridors to allow civilians to flee some besieged Ukrainian cities Monday. But the evacuation routes led mostly to Russia and its ally Belarus, drawing withering criticism from Ukraine and others.

Ukrainian officials on Monday accused Moscow of resorting to “medieval siege” tactics in some places, and in one encircled city, Mariupol, there was no sign yet of an evacuation.

Efforts to set up safe passages for civilians to leave besieged areas over the weekend fell apart. But the Russian Defence Ministry announced a new push on Monday, saying civilians would be allowed to leave the capital of Kyiv, the southern port city of Mariupol, and the cities of Kharkiv and Sumy.

The two sides also planned to meet for talks again Monday, even though hopes were dim that they would yield any breakthrough. Their foreign ministers are scheduled to meet in Turkey on Thursday, according to that country’s top diplomat.

In Mariupol, where an estimated 200,000 people hoping to flee were becoming increasingly desperate, Red Cross officials waited to hear when a safe humanitarian corridor would be established. The city is short on water, food and power, and mobile phone networks are down. Shops have been looted as residents search for essential goods.

Police moved through the city advising people to remain in shelters until they heard official messages broadcast over loudspeakers to evacuate. Russia and Ukraine traded blame after a planned evacuation mostly failed over the weekend there.

Shelling appeared to be mostly on the city’s outskirts, but on Sunday, cars of people hoping to leave in an evacuation convoy were gathered in a central square when shells landed nearby. All fled immediately.

Even hospitals in Mariupol suffered shortages of antibiotics and painkillers, and doctors performed some emergency procedures without them.

The lack of phone networks has left anxious citizens approaching strangers to ask if they knew whether relatives living in other parts of the city and whether they were safe.

At the International Court of Justice, Ukraine pleaded for an order to halt Russia’s invasion, saying Moscow is already committing widespread war crimes and “resorting to tactics reminiscent of medieval siege warfare.” Russia snubbed Monday’s hearings, leaving its seats in the Great Hall of Justice empty.

Well into the second week of war, Russia’s plan to quickly overrun the country has been stymied by fierce resistance. Its troops have made significant advances in southern Ukraine and along the coast, but many of its efforts have become stalled, including an immense military convoy that has been almost motionless for days north of Kyiv.

The battle for Mariupol, in particular, is crucial because its capture could allow Moscow to establish a land corridor to Crimea, which Russia annexed from Ukraine in 2014 in a move that most other countries considered illegal.

The fighting has sent energy prices surging worldwide, stocks plummeting, and is threatening the food supply and livelihoods of people around the globe who rely on farmland in the Black Sea region.

The death toll, meanwhile, remains unclear. The UN has confirmed a few hundred civilian deaths but also warned the number is a vast undercount. Police for the Kharkiv region said Monday that 209 people have died there alone, 133 of them civilians.

The Russian invasion has also sent 1.7 million people fleeing Ukraine, creating what the head of the UN refugee agency called “the fastest-growing refugee crisis in Europe since World War II.”

In the latest cease-fire proposal, most of the evacuation routes were toward Russia or its ally Belarus, a move Ukrainian Deputy Prime Minister Irina Vereshchuk called “unacceptable” and French President Emmanuel Macron said was “hypocrisy”. Belarus served as a launching ground for the invasion.

“I don’t know many Ukrainians who want to seek refuge in Russia. That’s hypocrisy,” Macron said in an interview on French news broadcaster LCI.

“Humanitarian actors need to be able to intervene so we must get full cease-fires when they intervene,” Macron said.

The issue won’t be solved via “corridors which are being threatened right away (by Russia),” he added.

The Ukrainian government instead proposed eight routes allowing civilians to travel to western regions of Ukraine where there is no shelling.

Meanwhile, Kyiv mayor Vitali Klitschko said in a Telegram video address that “fierce battles” continued Monday in the Kyiv region, notably around Bucha, Hostomel, Vorzel and Irpin â€” areas away from the humanitarian corridors â€” and were hitting civilians.

In the Irpin area, which has been cut off from electricity, water and heating for three days, witnesses Monday saw at least three tanks and that Russian soldiers were seizing houses and cars, while explosions could be heard.

Russian forces continued their offensive in Mykolaiv, opening fire on the city some 480km south of Kyiv, according to Ukraine’s General Staff. Rescuers said they were putting out fires caused by rocket attacks in residential areas.

“Russia continues to carry out rocket, bomb and artillery strikes on the cities and settlements of Ukraine,” the General Staff said, and repeated earlier Ukrainian accusations that Russia has targeted humanitarian corridors.

The statement also accused Russian forces of taking women and children hostage and placing weapons in residential areas of cities â€” though it did not elaborate or provide evidence.

The West has broadly backed Ukraine, offering aid and weapon shipments and slapping Russia with vast sanctions. But no NATO troops have been sent to Ukraine. 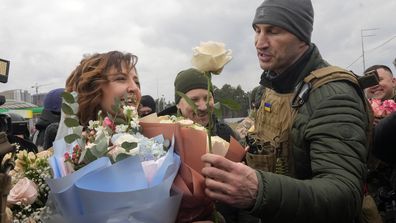 Ukrainian President Volodomyr Zelenskyy has criticised Western leaders for not responding with more force to Russia. He appealed again on Monday for a no-fly zone over Ukraine or warplanes.

“How do peaceful people in Kharkiv or Mykolaiv differ from (people in) Hamburg or Vienna?” Mr Zelenskyy asked.

NATO so far has ruled out policing a no-fly zone because of concerns such an action would lead to a far wider war.

Hollywoodbets Durban July fashion: How to stand out from the crowd

The Durban July is just around the corner, and...

On plenty of South Asian tours, Australian players can become exemplars of the thousand-yard stare, brought on by hard-turning wickets and wily spin bowlers...
Read more

Penny Wong started Thursday with some fish ball juk and noodles, not so different from her childhood in Malaysia's Sabah region.The congee-like dish from...
Read more