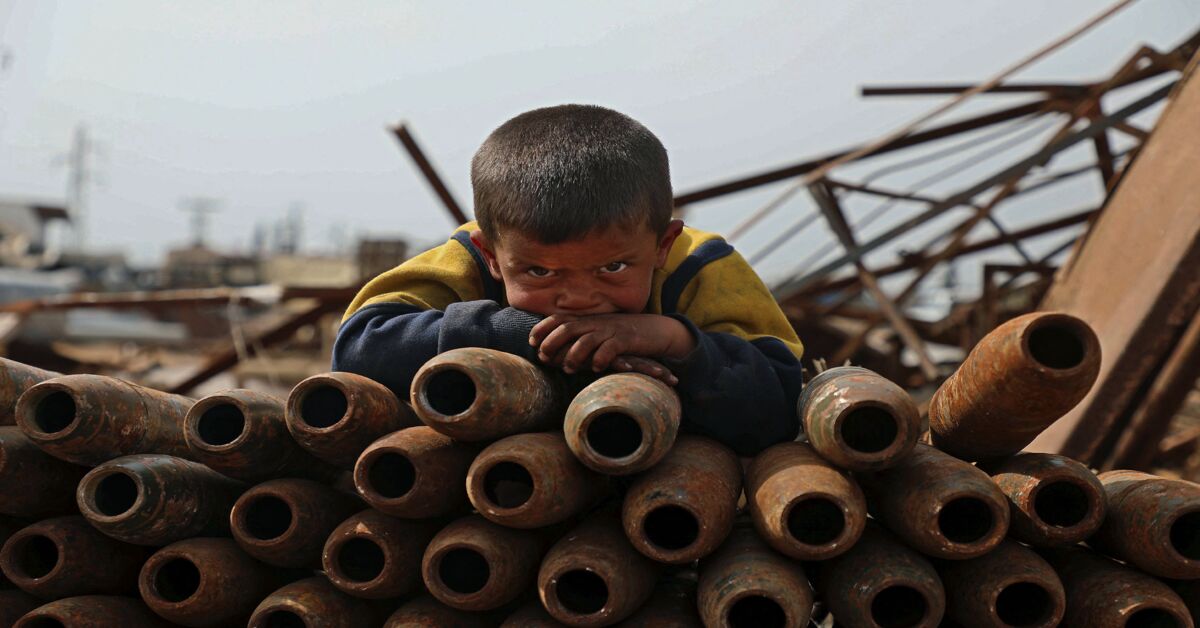 ALEPPO â€” Children in opposition areas in northwest Syria are living inÂ dire conditions. Not only are they denied their basic rights, but they are also deprived of any chance to realize their smallest dreams. This is especially the case for children living in displacement camps and who are deprived of education, playtime, medical treatment,Â and other basic rights and services.

Child labor has become common in Idlib, which is under the control of Hayat Tahrir al-Sham (HTS). The issue is being exacerbated because of the exorbitant cost of living in the region, which is forcingÂ children to leave school to join the labor market.

The problem not only threatens childrenâ€™s futures but also the futures of generations to follow due to the long-term problems that will ensue. The children are performing low-paid,Â difficult jobsÂ such as sheep herding, car and motorcycle repair, construction, blacksmithing, carpentry and other arduous tasks.

These working children receive low wages since Idlib’s labor market sees them as still at the nascent stage of learning the profession. The daily wage of a child does not exceed 10 Turkish liras (around 90 cents). This amount can buy a family of five only four bundles of bread.

The increasing number of children entering the labor market and the lack of job opportunities in well-known professions have pushed some of them to work in smuggling activities.Â Some also take to the streets to sell napkins, chewing gum and sweets on the sidewalks and in front of schools in Idlib and in the villages in the countryside, as well as inside the camps. Some children sell corn and hummus balila.

Al-Monitor met Ahmed Daoud, 10, who was displaced with his family from the town of Maardabsa, south of Idlib. He lives with his family in al-Omran camp, west of the town of Haranabush in the Idlib countryside. He walks dozens of kilometers daily to sell biscuits in the camps in order to help his family cover living expenses.

â€œI have been selling biscuits for two years, since I was 8. I have never gone to school because I am the breadwinner of the family. My father died years ago and I help my mother with the expenses. I earn daily around six Turkish liras, which can pay the price of the family’s bread,â€ he said.

Mahmoud Bakour, 11, is also displaced and resides in a camp on the outskirts of the city of Idlib. He dropped out of school this year due to his family’s financial situation. He now sells beans to the children in the camp and at the schoolsâ€™ gates.

Mahmoud said, â€œI am always on the verge of crying because my friends can study while I canâ€™t. In the summer, I sell ice cream in our camp and in the nearby displaced camps, and in the winter I sell beans in the camp, on the sidewalks of public roads and at the gate of the school near the camp. My mother wakes up early and prepares the lupini beans cooked on firewood. My day starts at 8 a.m. I work to help my mother and father because my father is sick and is unable to bring in any income.â€

Nour al-Khatib, who works with theÂ Syrian Network for Human Rights and resides in Idlib, told Al-Monitor, â€œWith the spread of extreme poverty, child labor has soared in Idlib. Sometimes parents cannot afford the costs of education, and sometimes the child is the [only] family breadwinner.â€

She added, â€œChildren are vulnerable to exploitation in the labor market. They are often entrusted with dangerous tasks that are not commensurate with their body structure and that put them in life-threatening conditions, such as working in fuel and oil burners and smuggling goods. This situation has deprived them of their right to education.â€

Khatib noted that the sight of children working as street vendors or sifting through garbage dumps has become common amid the continued deterioration of the living conditions of all Syrian families in Idlib. “Hundreds of thousands of families are living below the poverty line. The number of homeless children exposed to all forms of exploitation has soared. This threatens future generations and the future of Syria,” she said.

Fatima Obeid, a media official with the White Helmets, told Al-Monitor, â€œThe White Helmets launched a campaign dubbed ‘I am a child’Â on social media, coinciding with Universal Children’s Day, to shed light on the fate of hundreds of thousands of children in Idlib and opposition areas in northwest Syria. We called for action to protect them and meet their basic needs. Our teams also carried out field activities and recreational activities to ease the psychological burdens on children.â€Â

Ola Nasrallah, a psychological support activist who works with theÂ Hope Makers Association in Idlib, told Al-Monitor, â€œEvery day on my way to work in the morning and before sunrise, I see a large number of children between the ages of 7 and 14 carrying nylon bags and collecting soda and scrap cans to sell them. The scene brings tears to my eyes.â€

Nasrallah warned of the danger of child labor: “The reason for the rampant spread of this phenomenon is that the war in Syria has either killed or incapacitated the breadwinner in a large percentage of families. This forced a large number of children to find jobs to help with living expenses.â€

She added, “Poverty, the current crisis in living conditionsÂ and unemployment among adults have greatly contributed to the surge in dropouts and child labor. The extreme poverty of Syrians in Idlib has pushed children to search for jobs, even difficult and arduous jobs, to gain some money and make ends meet. Every day I see hundreds of children going to work in workshops and restaurants and children pulling carts in the streets to sell cakes and some food items, which poses a threat to their lives.â€

Nasrallah pointed out that working children are exposed to physical and psychological risks and mistreatment at work. â€œThey often turn to smoking, and they become angry and nervous in light of their harsh and difficult daily experiences,â€ she said. â€œThese children are handling tough responsibilities at a very early stage of their lives.”