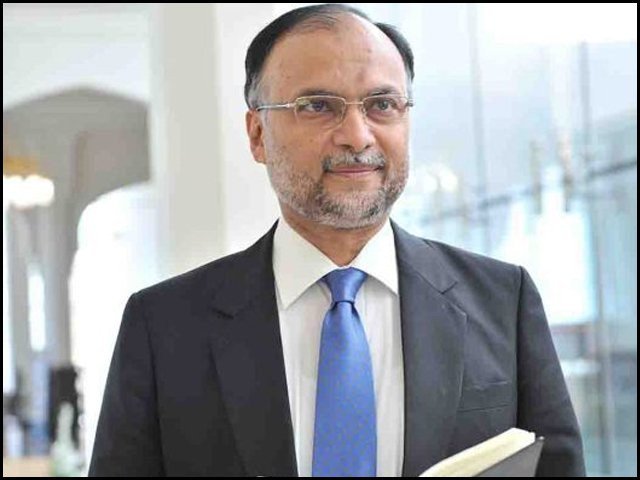 A reference was filed against the federal minister at the National Accountability Bureau (NAB) in Islamabad on December 18, 2020 after an encroachment scandal had come to light in July 2019.

The PML-N leader was arrested in December 2019 and released on bail the following year in February. However, the accountability court had rejected Iqbal’s plea for acquittal in February earlier this year.

Upon the IHC’s request, the NAB investigating officer informed the court that he had got the case in 2018 and that the arrest was made in 2019.

The CJ remarked that the NAB had filed the reference “without knowing what CDWP – the technical, financial and economic analyses of various projects – even is”.

“Have you seen the statement of the secretary that you made a sworn witness to the case?” the judge lambasted, adding that the NAB had “stopped a public project” without paying heed to the costs.

“We did not stop the project,” the NAB investigating officer told the court.

The NAB prosecutor responded to the court by saying that the additional prosecutor was absent and he would present the arguments; however, the court refused to adjourn the case.

“This case is being seen under the amended law,” the NAB prosecutor stated referring to the recent NAB law changes. “[But] the amendments have nothing to do with this case,” the judge stated. “Your job was to look at the corruption,” CJ Minallah added, “but your interests were elsewhere”.

The prosecutor then informed the court that the project was a provincial matter after the 18th Amendment and it was then transferred to the Ministry of Inter-Provincial Coordination (MIPC).

“Was Ahsan Iqbal heading the MIPC?” the judge inquired, to which the NAB prosecutor said that Iqbal was the minister for planning.

“Then what authority did Ahsan Iqbal misuse?” the court asked.

“It is not your job to decide what policy should be made for which project,” CJ Minallah added, “whether Narowal is a small city or a big one, what sort of projects should be perused there, these matters are none of your concern”.

“You have no clue how the government works,” CJ Minallah remarked, “tell us of a single corruption allegation in all this. If you speak of losses, then it is you who caused them by stopping the project. By this logic, you should have filed a case against yourself.”

“Will NAB now see to what government will do what?” the judge retorted. “Which newspaper was it, and what was even written there that you opened this case? Were the facts even verified by the NAB chairman? On what basis was a case filed against corruption charges in a public welfare project?”

The NAB prosecutor asked the court for permission to look at the case according to the present law but this too was rejected by the bench.

“You need a lot of training,” CJ told the investigating officer and criticized him for “playing with people’s credibility”.

“You have been asked 15 times to inform the court about corruption,” CJ Minallah added, “you make false cases against people and when they are declared false you cannot even defend them”.

The IHC then ordered for Iqbal to be acquitted in the case.

‘Imran mastermind of cases against PML-N’

Speaking to the media after the hearing, Iqbal said that, “The NAB has accepted that the corruption references against me were without proof”.

“Billions of rupees were wasted in an attempt to prove the false allegations,” added the PML-N leader, “the court admitted that the NAB has been engaged in political engineering”.

Iqbal also expressed gratitude towards his party and voters, as well as the media, for reporting fairly on the matter.

“Imran Khan cannot break us,” he added, saying that he was not afraid of the PTI chief’s false accusations.