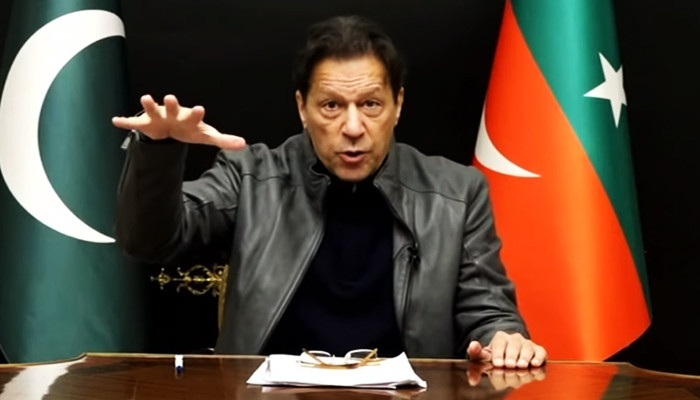 The PTI chief slammed state institutions after his party leader was booked in a sedition case.

Earlier today, Chaudhry was taken in custody from his residence after he publically issued threats aimed at Election Commission of Pakistan’s (ECP) members in a media talk.

Speaking to the media at the court, Fawad said that he is “proud” of the case that has been registered against him. “Nelson Mandela also faced a similar case. It is being said that I committed treason,” he said.

The PTI leader said that he is a former federal minister and a Supreme Court lawyer, therefore, he should be treated respectfully.

Imran Khan, while censuring the ECP in his address, also questioned if it wasn’t aware of the Constitution’s Article 218 and its third clause which reads: “It shall be the duty of the Election Commission to organise and conduct the election and to make such arrangements as are necessary to ensure that the election is conducted honestly, justly, fairly and in accordance with law, and that corrupt practices are guarded against.”

The PTI chief asked the polls organising authority on what basis did it choose the name of Punjab interim chief minister Syed Mohsin Raza Naqvi.

“Did the election commission not know about Mohsin Naqvi’s background? He played the maximum role in toppling our government. Wasn’t he with [Pakistan Peoples Party’s Co-Chairman] Asif Ali Zardari in the Sindh House. Didn’t he call Mohsin Naqvi his own son?” Khan questioned the electoral authority.

He added that his party chose the names which it thought would be acceptable by the Pakistan Muslim League-Nawaz (PML-N).

The former premier stated that ex-chairman of the National Accountability Bureau (NAB) investigated the caretaker CM of Pakistan’s biggest province for which the latter returned Rs3.5 million to the anti-graft body.

He raised concerns about the appointments done by Naqvi since assuming office doubting the possibility of free and fair elections in its wake. “Can we call this an impartial interim government? Police have started harassing our workers. They already have a plan made. Mohsin Naqvi has not arrived to conduct transparent elections. They want to shut down my voice.”

The PTI chairman also spoke about approaching the judiciary against the Punjab caretaker chief executive. “I appeal the judiciary to protect our basic right. The nation is expecting the judiciary to safeguard their rights and save democracy,” he said, further lamenting how the institution hasn’t done that so far.

‘I  have no hope for justice’

Accusing the Punjab interim CM and the PML-N of sabotaging the Joint Investigation Team (JIT) formed to look into the attack on the PTI chief in Wazirabad on November 4 had been reconstituted again, Imran Khan questioned why such a move had been made.

Hinting that “powerful” forces were out to get him and were involved in his attack, Khan said: “DPO Gujrat Ghazanfar Hussain and SSP Nadeem Hussain, made a video of Naveed, but when the JIT called the two officers and asked for the mobile phone [used to make the recording], they flatly refused. I want to know who was behind these two officers?”

The PTI chief went on to say that he could only hope for any justice in the matter if the JIT has been formed under the supervision of the chief justice himself. However, he said: “I have no hope for justice if those who I believed were involved in the attack — Rana Sanaullah and Shehbaz Sharif —are sitting in the federal government.”

The JIT was reconstituted on Monday after differences emerged between Capital City Police Officer (CCPO) Lahore Ghulam Muhammad Dogar and the other four members. The four members of the probe body have been replaced after they raised objections against Dogar’s ‘politically inclined’ conduct.

Speaking on the state of the country’s political scenario, Khan said that he had “sacrificed” PTI governments in Khyber Pakhtunkhwa and Punjab because the country needed clean and transparent elections.

“However, Naqvi’s selection is proof that the PML-N has no intention of conducting elections,” he added.

The former premier also slammed those who wanted the elections to be pushed forward and said “it is written of the Constitution” that elections must be held within 90 days of the dissolution of the assembly.

“If there is a Constitution and law in this country, the election cannot go beyond 90 days.”

The PTI chief then reiterated his dedication to his cause and said that all hope now lay with the judiciary and the community of lawyers. “It is incumbent upon you to ensure that elections are held in time.”