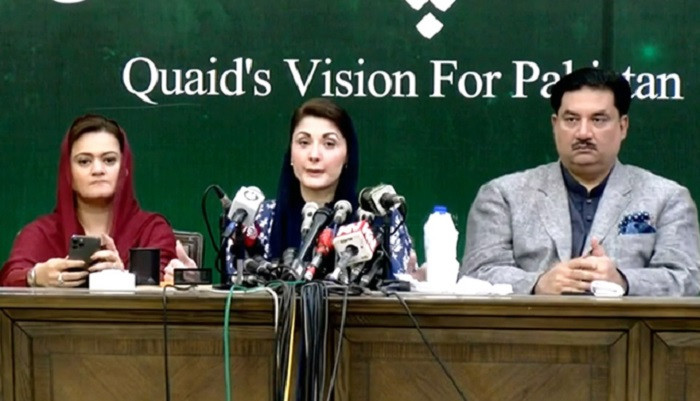 She was referring to reports that the former premier held a meeting with an ‘important personality’ at Aiwan-e-Sadr in the federal capital recently.

In a recent interview with a local TV channel, Imran when asked about the meeting said, “I don’t lie and cannot tell the truth.”

Addressing a press conference in Lahore on Tuesday, Maryam said the former premier was raising hue and cry after failing to get any relief from the powers that be.

She also called for dealing with PTI with iron first, saying the Imran Khan-led “foreign-funded party” should not be allowed to hold long march on Islamabad.

Maryam said the PTI chief should not be allowed to “attack” the federal capital with his “armed group”.

“An example should be made out of him [Imran] for hatching conspiracy against the country and attacking the state institutions,” she remarked.

Her statement came a day after the PTI chief indicated that his party’s much-awaited long march to the federal capital might finally be taking place in the third week of this month.

The former prime minister on Monday held a meeting of district presidents and secretaries of his party’s Khyber Pakhtunkhwa (K-P) and Punjab wings, wherein he issued strict instructions to officials for the upcoming march.

He had directed them to ensure full participation of the people and advised them to consider “real freedom” as “jihad”. He added that if they do not get “real freedom” now, they might never get it at all.

Responding to a question about PTI’s narrative of real freedom, Maryam in today’s presser said Imran’s entire narrative is based on lies. “This is not a narrative but a fraud… shelf life of Imran Khan’s lies has expired,” she said.

“Is [Finance Minister] Ishaq Dar’s return [to country] not a slap in the face of PTI’s narrative,” she asked.

Maryam while highlighting the PTI chief’s hard-hitting statements against the establishment said the ousted premier would praise military when he was sitting in the Prime Minister’s Office. “Today he is calling them neutrals and using abusive language against them. Nawaz Sharif never used abusive language against establishment like Imran,” she added.