In Japan, the Message of Anti-Racism Protests Fails to Hit Home 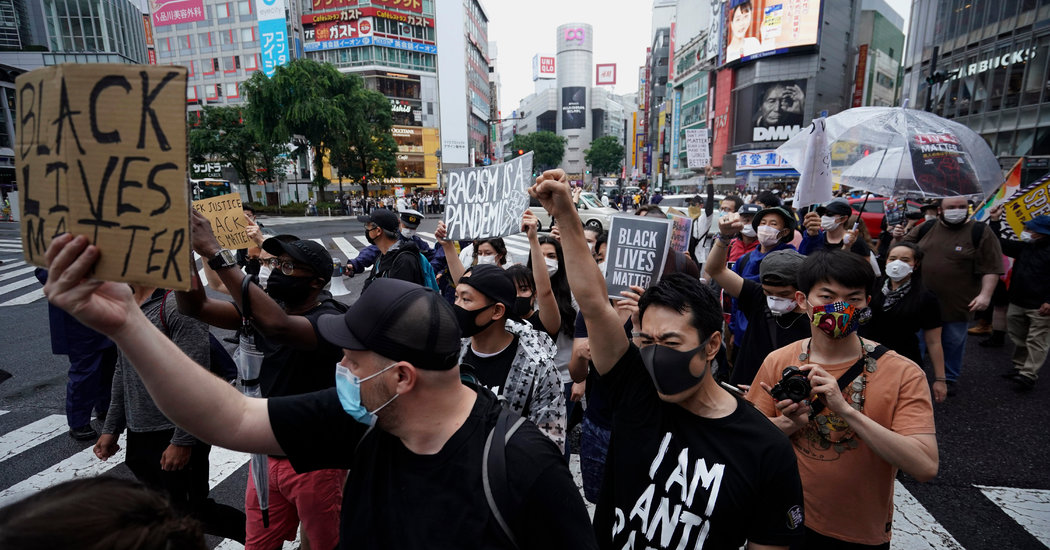 TOKYO â€” As protests were spreading around the globe in response to George Floydâ€™s killing by the police, Sierra Todd, an African-American undergraduate in Japan, organized a march last month in Tokyo to show solidarity with American demonstrators.

She said she hoped it would prompt Japanese marchers to think about racism in their own country, too. â€œOf course, we want to talk about American issues, and Black Lives Matter is an American thing,â€ said Ms. Todd, 19, who is studying at Temple Universityâ€™s campus in Tokyo. â€œBut we also do live in Japan.â€

A backlash quickly followed. Critics on social media accused participants of disregarding the risks of spreading the coronavirus. An interview with Ms. Todd posted on YouTube elicited comments that â€œThis is an American issueâ€ and â€œPlease do this in your own country.â€

With images of Americaâ€™s racial strife rolling across television screens, some in Japan have insisted that institutional racism is a faraway problem. That, activists and scholars say, is keeping the public from more fully seizing the moment to reckon with entrenched discrimination against marginalized groups in Japan.

A vocal faction of Japanese conservatives endorses racist notions of blood-based purity. And the largely homogeneous population has often resisted acknowledging difference or engaging in the kind of introspection about racism and inequality that is playing out in the United States.

But Japan has a longstanding history of discrimination against minorities, including the descendants of Koreans brought to Japan as forced labor before and during World War II; Indigenous groups like the Ainu of the northernmost island, Hokkaido; those whose lineage traces back to a feudal class of outcasts known as buraku; and mixed-race individuals.

The mistreatment of mixed-race people through their school years and beyond has drawn particular attention as a growing number of biracial celebrities have spoken out.

In an emotional testimonial posted on Twitter last month, Louis Okoye, a half-Japanese, half-Nigerian professional baseball player, described how he had often been bullied as a child in Japan because of the color of his skin.

â€œI would look out from the balcony of our home and think, if I jumped off and was born again, maybe I can come back as a normal Japanese person,â€ he wrote in the post, which has been retweeted 52,000 times. Most of the comments were overwhelmingly supportive.

Still, the conversation is shifting only gradually in Japan, and the resistance can be stiff. When Bako Nguasong and V. Athena Lisane, English teachers in Fukuoka â€” the largest city on the southern island of Kyushu â€” organized a march there last month, one poster wrote on Twitter that â€œI wonâ€™t feel any mercy if these people are told to get deported by the local Japanese.â€

Ms. Nguasong, 36, left behind a home and a career in Washington and moved to Japan two years ago because she was weary of fearing for her safety as a Black woman in America. â€œI knew it wasnâ€™t going to be diverse, but I also knew I wasnâ€™t going to be afraid for my life,â€ said Ms. Nguasong, who previously worked as a mental health coordinator for former inmates.

She did find physical security in Japan, where crime rates are low and police killings are rare. But she could not escape racism, even if in Japan it takes a less violent form.

Ms. Nguasong said that she had noticed looks and whispers from local Japanese people, and that passengers had avoided sitting next to her on trains. Two older women, she said, once groped her breasts in an elevator in apparent surprise over her figure.

A glaring reminder of that came last month when NHK, the public broadcaster, aired a segment about the Black Lives Matter protests in the United States.

A clip showed African-Americans as overly muscled, music-playing, looting caricatures, and presented the protests as the product of frustration with economic disparity and the coronavirus, without mentioning police brutality. After pushback on Twitter, NHK apologized and took the clip down.

The countryâ€™s insularity has generated not just overt and unconscious bias against people abroad, but also a distrust of foreigners who come to Japan.

As the country slowly opens its doors to outside workers to help confront a demographic crisis, improving its treatment of foreigners may be crucial to Japanâ€™s future. But according to a 2017 Ministry of Justice survey, 30 percent of foreigners in Japan said they had been the target of discrimination, with many citing issues getting jobs or housing.

A candidate in the Tokyo governorâ€™s race, Makoto Sakurai, is running on a platform that includes the slogan â€œabolish welfare for foreigners.â€

At the same time, though, some Japanese show a fascination with foreigners, including Black pop culture. That has led to accusations of cultural appropriation, and left some African-Americans chagrined that more people in Japan donâ€™t reflect on their own racism.

â€œJapanese people who like Black culture like everything that is stereotypically Black, like gold teeth,â€ said Farah Albritton, 28, an English teacher in Fukuoka who is from Brooklyn. â€œOr they will change their hair to be Afro-textured or put in cornrows.â€

Ms. Albritton has experienced incidences of racism in Japan, such as when a man in the street shouted â€œyouâ€™re so gross,â€ or when a casting agent for a modeling job asked her to demonstrate a â€œBlack handshakeâ€ at an audition.

She said she was offended that Japanese acquaintances who emulate Black pop stars have shown little or no public support for Black Lives Matter. â€œYou are taking part in our culture, and we have accepted you into our culture,â€ Ms. Albritton said. â€œAnd you canâ€™t even post about our friends who are dying â€” the people who are inspiring you.â€

Compared to Black Lives Matter marches in France or Britain, which have drawn tens of thousands of people, the rallies in Japan have been modest in size. The largest, in Tokyo, drew about 3,500 people, with many participants having some foreign roots.

Some scholars worry that the Japanese public only sees racism abroad without reflecting on it closer to home.

â€œIf they are just saying, â€˜Oh, gee, Blacks in America are facing horrible things and we have to help them,â€™ that is almost like charity,â€ said Haeng-ja Chung, a professor of anthropology at Okayama University and an ethnic Korean born in Japan. â€œBefore we accuse other societies, we have to stop and think: â€˜How about us?â€™â€

The tennis champion Naomi Osaka, the daughter of a Haitian-American father and a Japanese mother whose superstar status has inspired a reassessment of traditional Japanese identity, has called out those on social media who claim there is no racism in Japan.

In one Twitter post, she reminded followers of an incident when Japanese comedians said she needed â€œbleachâ€ because she was â€œtoo sunburned.â€

Hiromi Okamura, 57, who attended the Black Lives Matter march in Tokyo last month, said it had helped her think about how â€œunconscious actions are what often leads to prejudice.â€

â€œI think that there is potentially some deep-seated racismâ€ in Japan, said Ms. Okamura. â€œWhatâ€™s important is to understand that, and carefully communicate it.â€

Some Japanese are working to draw more attention to prejudice against foreigners. After video emerged on social media showing Tokyo police officers roughing up a Turkish immigrant, Ramazan Celik, during a traffic stop, Kento Suzuki, who volunteers at a detention center where asylum seekers and other foreigners are held, organized two protests.

â€œI have been thinking that Japan is a racist society from a very long time ago,â€ said Mr. Suzuki, 28. â€œThere are a lot of people becoming more involved in the movement to help immigrants in Japan.â€

Still, Mr. Suzuki worries about cases in which asylum seekers and immigrants have said that they were abused or neglected while in detention.

â€œI feel hope and also dread,â€ he said. â€œItâ€™s a constant battle between these two emotions.â€