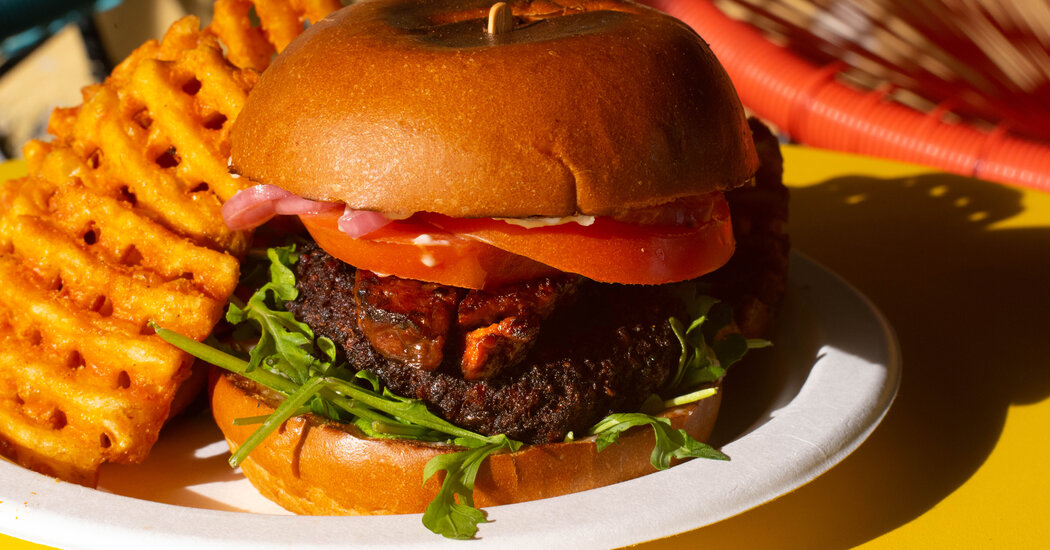 LOS ANGELES â€” For every hamburger in this city, there exists an equal but opposite veggie burger.

The glistening smashburger, slippery with fried onions. The ample bistro burger pooling with juice. The diner burger peeping from its paper wrapper.

Many of these are now built with industrial meat simulacra made from pea and soy proteins, which tend to produce deep-brown patties that can look and feel the part â€” that can bleed imitation blood, even. But their faint thrill has worn off.

Burgers made with the same ready-made imitation meats are increasingly dull and devoid of character, monotonous in texture and flavor, practically indistinguishable from one another. Luckily, veggie burgers made with actual veggies persist in the Los Angeles area. And this is where the creativity and deliciousness of the genre are concentrated.

Thereâ€™s HiHo Cheeseburgerâ€™s tangy, saucy fast-food-style vegan burger, better with a side of some of the most exquisite French fries in town â€” dark-edged and crisp and properly salted. And the squishy falafel burger at Nicâ€™s on Beverly, dripping with tahini sauce. Even the tiny burger institution Pie â€˜N Burger, with its sticky, shiny, completely no-nonsense counter in Pasadena, serves an old-fashioned patty made from vegetables, made for the restaurant off site.

The best veggie burgers tend to be idiosyncratic â€” shifting blends of vegetables, mushrooms, beans and grains, deepened with the umami of soy sauce, nutritional yeast, miso or kombu. They are, in other words, the result of thoughtful cooking.

One of my favorites is on the menu at Spoke Bicycle Cafe, a bar and bicycle shop set on a slope at the edge of the Los Angeles River in Frogtown. Serious cyclists in padded shorts and bike shoes waddle through the patio after a long ride, as freelancers on laptops shift from chagaccinos to draft beers.

The burger is thick, craggy, and inviting with the flavor of smoked mushrooms. It has a satisfying texture from beets, brown rice and beans, and it carries a slice of tempeh bacon, marinated and smoked in house, along with enough pickled onion to keep it sharp.

The excellent barbecue burger at Seabirds Kitchen in Long Beach uses beets in the patty as well, along with tofu, chia and flax seeds. Covered with a tangle of finely sliced, battered and fried pickled onions, each bite comes with a range of fulfilling crunch.

The veggie burger isnâ€™t a novelty, but a dish with its own history parallel to the hamburgerâ€™s, constantly evolving.

High up on my list of places Iâ€™d like to visit, if I could time travel, is the highway cafe run by the Self-Realization Fellowship in Los Angeles, so I could order the culty mushroomburger made from produce grown by the groupâ€™s own postulants, and eavesdrop on the conversations at other tables.

It closed in the 1960s, but my point is that for about as long as weâ€™ve had hamburgers in the United States, weâ€™ve had countless alternative patties made from vegetables, soy derivatives, glutens, nut flours and more, stuffed into a sandwich.

A recipe for mock oyster patties appeared in Almeda Lambertâ€™s 1899 book, â€œGuide for Nut Cookery.â€ And the dietitian Ella Eaton Kellogg published an early recipe for gluten patties in her 1904 book, â€œHealthful Cookery,â€ intending it as a replacement for beef patties in burgers and other dishes.

Food companies recognized very early on that a burger patty was a smart and safe way to market their products: The soy manufacturer Madison Foods came out with a canned soy-wheat paste called Soyburger in 1937, and Loma Linda Food Company offered Gluten Burger the following year.

These products were probably not very good compared with handmade, well-seasoned vegetable patties â€” I havenâ€™t tasted them, Iâ€™m using my imagination â€” but they were a practical alternative, and they paved the way for a juggernaut of industrial vegan products marketed as better for your body, or better for the planet.

Hamburgers, by definition, are made from beef. Veggie burgers, if you think about it, have barely any restrictions on them â€” the entirety of the vegetable kingdom is game â€” which should make them a creative endeavor for restaurant cooks, and not an opportunity to buy a ready product. This has always been the veggie burgerâ€™s source of brilliance in the right hands (anything goes!) and its curse in the wrong ones (anything, unfortunately, goes).

I come across big brands on menus here and there â€” Astroburgerâ€™s devotion to Gardenburger products is both endearing and unmatched â€” but the rise of Beyond Meat and Impossible Burger on so many local restaurant menus is astonishing. I donâ€™t particularly like these substitutes, but their homogeneity is also objectionable.

â€œWhen I was a kid and became vegetarian, the texture of actual meat was the most off-putting thing to me,â€ said Frederick Guerrero, a founder of Burgerlords.

The restaurantâ€™s veggie burger doesnâ€™t imitate ground beef, exactly. Instead, it exalts vegetarian textures: tackily chewy barley, softly crunchy cashews, and airily crisp panko. It holds firm, without being at all dry or crumbly â€” the patty is bound with eggplant, among other things â€” and itâ€™s rich with umami. In short, delicious.

The cooks at Burgerlords brown it and tuck it in a soft sponge bun from Puritan Bakery, the same company that makes the bread for In-N-Out Burger. That California burger chain is a kind of blueprint for Mr. Guerrero, who works with a sharp, vegan Thousand Island dressing made from a base of vegan mayonnaise, and has a well-documented fondness for burger nostalgia.

He opened his restaurant, which now has two locations in Los Angeles, with his brother in 2015. During the pandemic, it shifted from being almost vegan (it had one meat option) to entirely vegan.

â€œWe were hesitant to do a vegan-only restaurant at first,â€ Mr. Guerrero said. But after the first wave of restaurant shutdowns in 2020, and the spotlight on the chaos within the beef industry, they went for it. â€œWe never served beef again after that initial shutdown,â€ he said.

Burgerlords added a second housemade patty to the menu last year, using TVP, or textured vegetable protein. Mr. Guerrero said he wanted an option for diners with allergies who couldnâ€™t have the restaurantâ€™s standard vegan patty, which contains gluten and nuts. But he didnâ€™t want to bring in Impossible or Beyond since those products were already available at so many places.

This burger is less recognizably vegetal, with a soft, velvety exterior reminiscent of stir-fried meat. It satisfies a completely different craving than the barley-based burger, and it does it well, without pretending to bleed.

Babette Davis, 71, is the owner of Stuff I Eat in Inglewood, which she opened in 2008 with experience as a vegan home cook. When I asked Ms. Davis if sheâ€™d ever considered working with store-bought meat substitutes in her kitchen, she laughed at me.

Ms. Davis put a veggie burger on the menu after hearing requests from so many diners, and she makes a seriously old-school version, similar to incarnations from cookbooks published in the 1960s.

It begins with a nut loaf â€” one of the original building blocks of American vegan cookery â€” using seasoned walnuts, portobello mushrooms and cashews. Ms. Davis then mixes that with cooked wild rice in a food processor before forming her patties for the day.

To order, the patties are lightly browned on a griddle, along with some mushrooms and thick red onion slices, which all squeeze together in a sprouted bun. It isnâ€™t a fast-food burger. Itâ€™s more delicate and lean, more soft and earthy, the filling somewhere between mushroom pÃ¢tÃ© and patty.

Itâ€™s exactly the kind of charming anomaly that defines the veggie burgerâ€™s past, and maybe â€” hopefully â€” its future.