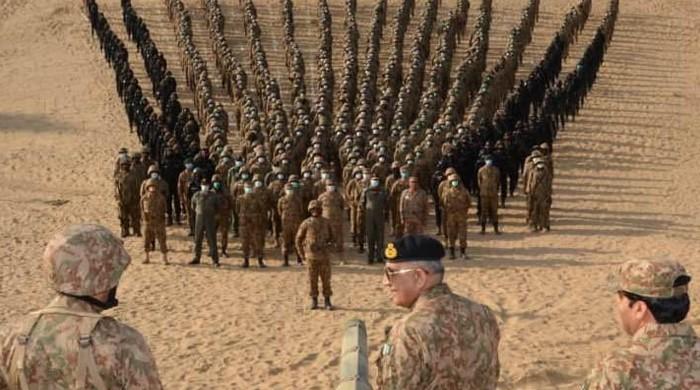 Army Chief General Qamar Javed Bajwa on Monday stressed vigorous training and the highest standard of preparedness as in peacetime they were a guarantee to peace.

The army chief’s comments came during his visit to the Thar Desert, near Chhor, where troops are participating in a training exercise called “Jidar-ul-Hadeed”, the Inter-Services Public Relations (ISPR) said.

The army chief witnessed the ongoing training exercises where the operational capability of field formations operating in the desert was being tested in a near-battlefield environment.

The exercise involves integrated manoeuvres of infantry and mechanised forces in a defensive role, the military’s media wing said.

COAS Bajwa was given a detailed briefing by the exercise commander on the aims and objectives of the exercise and drills being practised to ensure complete dominance in the battlefield, it said.

The troops are undergoing this exercise under “strenuous field conditions” for over two weeks, which will conclude on February 28.

“While lauding the standard of training of participating troops, COAS expressed his complete satisfaction over operational preparedness and combat readiness of the formation,” it added.