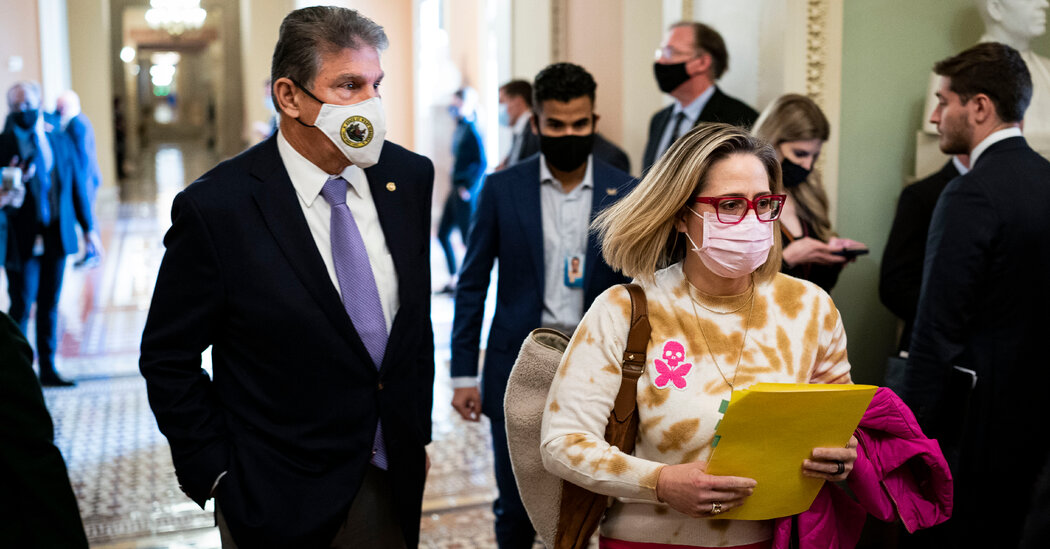 WASHINGTON â€” This past Martin Luther King Jr. Day, with a fight for voting rights again at the center of the political agenda, one quotation from the slain civil rights leaderâ€™s vast repertoire dominated liberalsâ€™ calls to action.

â€œI had hoped that the white moderate would understand that law and order exist for the purpose of establishing justice, and that when they fail in this purpose, they become the dangerously structured dams that block the flow of social progress,â€ ran the quote circulated on Monday by many Democrats, including Hillary Clinton, who openly called it a jab.

The contemporary targets of those words Dr. King wrote from a Birmingham jail in 1963 were two particular white moderates, Senators Kyrsten Sinema of Arizona and Joe Manchin III of West Virginia. They were singled out not because they oppose the far-reaching voting rights bill that is before the Senate this week â€” they and 48 other senators who caucus with the Democrats support it â€” but because they refuse to obliterate the Senateâ€™s filibuster rule to pass it over the opposition of all 50 Republicans.

The remarkable vitriol being trained by Democratic activists on two members of their own party has largely given Republicans a pass for blocking the bill and standing by new state laws designed to limit access to the ballot box and empower partisan actors to administer elections and count votes.

Republican senators such as Rob Portman of Ohio, Patrick J. Toomey of Pennsylvania and Roy Blunt of Missouri would face few repercussions for breaking with their partyâ€™s leaders and backing such legislation, since they will be retiring at the end of the year.

Yet they are standing against the Democratic bill, and have given little indication that they would be willing to negotiate a narrower ballot-access measure. Mr. Portman said on Tuesday that Democrats were using â€œoverwrought, exaggerated, and deeply divisiveâ€ accusations to push â€œan unprecedented federal takeover of our election system.â€

Democratic leaders tried to keep the focus on Republicans.

â€œIt hasnâ€™t been that long since Republicans and Democrats stood together and agreed that this was the right thing to do, to make sure that there was no discrimination against American voters,â€ Senator Richard J. Durbin, Democrat of Illinois, pleaded on the Senate floor. â€œThe last time we did this was 16 years ago, in 2006, and on a nearly unanimous basis.â€

But Democratic activists have spent far more time and energy trying to break the will of Mr. Manchin and Ms. Sinema on the filibuster than they have working to win over Republicans on the actual legislation.

On Tuesday, Emilyâ€™s List, the largest contributor to Democratic women candidates and by far the largest donor to Ms. Sinemaâ€™s 2018 Senate campaign, threatened to withdraw its support for her unless she relented on the filibuster.

â€œRight now, Senator Sinemaâ€™s decision to reject the voices of allies, partners and constituents who believe the importance of voting rights outweighs that of an arcane process means she will find herself standing alone in the next election,â€ the political action committee said in a statement.

The abortion-rights group NARAL indicated that it, too, would withdraw its support. Senators Elizabeth Warren, Democrat of Massachusetts, and Bernie Sanders, independent of Vermont, even hinted they could support primary challenges to their balking colleagues.

That stands to reason, activists say, because they are targeting the only real pressure point available to them; Republicans cannot be swayed.

â€œTo be very clear, the entire goal of this campaign is to pass the Freedom to Vote Act and the John Lewis Voting Rights Act,â€ said Adrien Horton, an activist from Denver who was on Day 7 of a hunger strike aimed at winning enactment of the measures. â€œWe are pressuring entire Senate as a whole. We are targeting Republicans. That being said, we are not concerned with the process. We are concerned with the outcome.â€

Why are voting rights an issue now? In 2020, as a result of the pandemic, millions embraced voting early in person or by mail, especially among Democrats. Spurred on by Donald Trumpâ€™s false claimsÂ about mail ballots in hopes of overturning the election, the G.O.P. has pursued a host of new voting restrictions.

Why are these legislative efforts important? The Republican push to tighten voting rules has fueled doubts about the integrity of the democratic process in the U.S. Many of the restrictions are likely to affect voters of color disproportionately.

How are Democrats pushing back? In Congress, Democrats have focused their efforts on two sweeping billsÂ that protect access to voting and clarify how to count electoral votes, but Republicans in the 50-50 Senate have blocked both. President Biden endorsed changing the Senateâ€™s filibuster rulesÂ to pass the legislation.

Which states have changed their voting laws? Nineteen states passed 34 lawsÂ restricting voting in 2021. Some of the most significant legislation was enacted in battleground states like Texas, GeorgiaÂ and Florida.Â Republican lawmakers are planning a new wave of election laws in 2022.

Will these new laws swing elections? Maybe. Maybe not. Some laws will make voting more difficult for certain groups, cause confusion or create longer wait times at polling places. But the new restrictions could backfire on Republicans, especially in rural areas that once preferred to vote by mail.

Of the two possible ways to achieve that outcome, it is far more likely that Mr. Manchin and Ms. Sinema would reverse themselves on the filibuster than it is that 10 Republicans would change their minds on the billâ€™s substance, though neither appears probable.

The spectacle of Democrats going after Democrats may not help longer term ambitions. President Biden needs Ms. Sinema and Mr. Manchin to come around if he is to win passage of any version of the climate change and social welfare bill that is stalled in the Senate.

And Democrats, facing sagging poll numbers and gale-force political headwinds, need some momentum if they hope to avoid staggering losses in the midterm elections this November.

Democrats still hope to highlight the differences between the two political parties as the Senate debates the issue â€” not the fractures within their party over that bodyâ€™s rules.

â€œLook, I think there is a sharp contrast when the members of one party are united in endorsing and seeking to advance voting rights and access to the ballot, and the members of other party are not willing to do that,â€ Senator Chris Coons, Democrat of Delaware, said.

Then once the debate is over and the votes are taken, lawmakers say they need to move on.