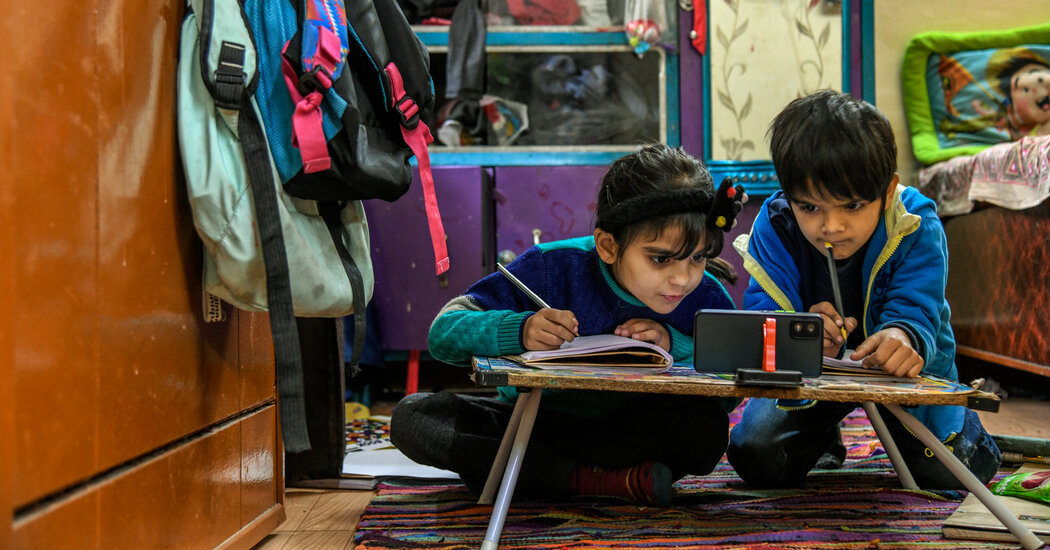 NEW DELHI â€” Some children have forgotten the alphabet or what their classrooms look like. Others have dropped out of school entirely, scrounging for work and unlikely to ever resume their studies.

For years, India has been counting on its vast pool of young people as a wellspring of future growth, a â€œdemographic dividend,â€ as many liked to put it. Now, after two years of the coronavirus pandemic, it is looking more like a lost generation, crushing the middle-class dreams of families looking for better opportunities for their children.

Hundreds of millions of students across India have received little to no in-person instruction with schools intermittently shut down since the start of the pandemic. As pandemic restrictions are lifted, then reimposed, schools are often the first places to close and the last to reopen.

Mahesh Davar, a farmhand in central India, is pained to see his young sons working beside him. He and his wife toiled in the fields to send their boys, now 12 and 14, to school, hoping it would secure them better jobs and easier lives.

Their education effectively ended almost two years ago, when schools shifted online; the family lacked the money for internet access. Around the globe, more than 120 million children have faced the same situation, according to the United Nations.

â€œPoor people like us fight every day to keep the stove burning,â€ Mr. Davar said. â€œTell me how and where we will afford the money for mobile phones?â€

Until the pandemic, India was pulling millions of people out of poverty, pinning its hopes of greater economic growth on education. That building block for the future is now eroding, threatening to upend Indiaâ€™s hard-fought progress and condemn another generation to manual, off-the-books labor.

â€œIn India, the numbers are mind-numbing,â€ said Poonam Mattreja, head of the Population Foundation, an advocacy group in New Delhi. â€œGender and other inequalities are widening, and weâ€™ll have much more of a development deficit in the years to come.â€

Many countries are weighing the trade-offs between childrenâ€™s education and public health. As Omicron has spread across the United States and Europe, officials have struggled to figure out how and when to keep schools open.

In South Asia, Sri Lanka has decided against closing schools, while in Nepal, they are shut until at least the end of January, despite the near impossibility of remote instruction in the Himalayan countryside. Swamped with new infections, Bangladesh reversed an earlier decision to allow vaccinated pupils to attend class, closing schools down for all students.

The repercussions can be especially dire in South Asia. Girls are entering into child marriages, and boys have abandoned their education to work.

The Rev. Nicholas Barla, a Catholic priest who has spent decades working with schools in rural communities, said that during recent travels to remote corners of India, he witnessed children reeling from boredom and isolation.

â€œThe mental growth that should have taken place stopped,â€ he said. â€œIt is tragic, because education is the only path leading out of darkness and the miseries of rural poverty.â€

Indiaâ€™s working-age population is projected to peak at 65 percent in 2031 before it begins to decline. Itâ€™s a potential asset that Indiaâ€™s prime minister, Narendra Modi, has celebrated, as recently as this month.

â€œThe strength of the youth will take India to greater heights,â€ he declared at a youth festival.

Typically a large share of the population entering the work force would be an economic boon. Now it could prove a burden, as undereducated and underemployed people in a welfare state like India end up consuming a larger share of resources, from free medicine to food subsidies.

The ranks of the underemployed are already swelling in Indiaâ€™s capital, New Delhi, which draws young people from villages across the country seeking economic opportunity. Many of them sleep on sidewalks, warm themselves next to big pots of boiling chai and stand every morning at a designated pickup place for daily laborers.

In a gritty corner in the old part of the city littered with clay teacups and spent beedis, Briju Kumar jostled with dozens of others hungry for a dayâ€™s work at a construction site. At 14, he abandoned online studies during a partial lockdown last year to contribute to the familyâ€™s finances.

â€œIf schools open, Iâ€™m not sure I will go back. Only if there is no work,â€ he said.

His family migrated from Bihar, one of Indiaâ€™s poorest states, when Briju was in the fifth grade so that his father, who never attended school, could earn more money driving an auto rickshaw. Intermittent lockdowns forced Mr. Kumar off the roads, and his son out of school.

Even before the pandemic, India was failing to keep up with the millions of new workers entering the job market each year, with growth not translating into job creation.

â€œItâ€™s not that we were doing really well on the way to the demographic dividend before Covid,â€ Ms. Muttreja said.

It might be about to get a lot worse. The World Bank estimates that India stands to lose as much as $440 billion in future earnings potential in the aftermath of the pandemic.

During the pandemic, young workers have been most affected when lockdowns and other economic disruptions occur, facing higher job losses and less financial support, according to a study by the International Labor Organization. In the years ahead, even if a rebound in economic growth creates new jobs, there may not be qualified employees to fill them.

â€œAt the beginning of the pandemic, it was digital, digital, digital, which is fine if youâ€™re a more middle-class, urban child,â€ said Terry Durnnian, UNICEFâ€™s education chief in India. â€œBut if youâ€™re talking about rural children, children with disabilities, migrant children, tribes, they lose out,â€ he said.

â€œThe learning loss is huge,â€ he added. â€œChildren are not getting skills or knowledge to move forward in life.â€

Vaccine mandate. The deadline has arrived for many unvaccinated health care workersÂ in the U.S. to get a first dose of the vaccine under a federal mandate. The rule, coming in stages, will ultimately affect about 10 million workers in the sector.

Remote education has been offered widely in India, but four out of 10 students lack the necessary internet connectivity to attend. And online teaching, particularly in public schools, has been largely available only for older students.

Across India, 1.5 million school closings have affected 247 million children in elementary and secondary schools, according to a UNICEF study. And as the pandemic drags on, more and more students have dropped out. A survey of 650 households in the western Indian cities of Mumbai and Pune found that enrollment in virtual preschools dropped by 40 percent as of last summer compared with before the pandemic.

Rupesh Gaikwad, who works as a grocery store clerk in the western state of Maharashtra, said he enrolled his 5-year-old daughter, Nisha, in preschool two years ago.

â€œOur daughter has never set foot in the classroom. She thinks the mobile phone is her school, because there has been no real interaction with teachers or other students, apart from seeing them on the mobile phone screen,â€ he said.

â€œWhat we are giving our children these days is not education for overall development but trying to keep them busy, knowing very well this is bad for their future.â€

Even before the pandemic, Indiaâ€™s education system was woefully inadequate, with many public schools in rural areas short of teachers and books. Less than half of students possess the reading and math skills to progress to the next grade.

During Indiaâ€™s first two waves of the pandemic, children were largely forgetting more than they learned, UNICEF found. Armed with this data, UNICEF has lobbied state governments, which oversee education, not to close schools.

Anuradha Maindola, a lawyer in the north Indian state of Uttarakhand, said her two children, Rudra and Ishita, had only spent about a month in physical classrooms since the Indian governmentâ€™s first lockdown in March 2020.

She decided to have 8-year-old Ishita, who is struggling to read and write, repeat the first grade.

â€œMy children were learning nothing online,â€ she said.