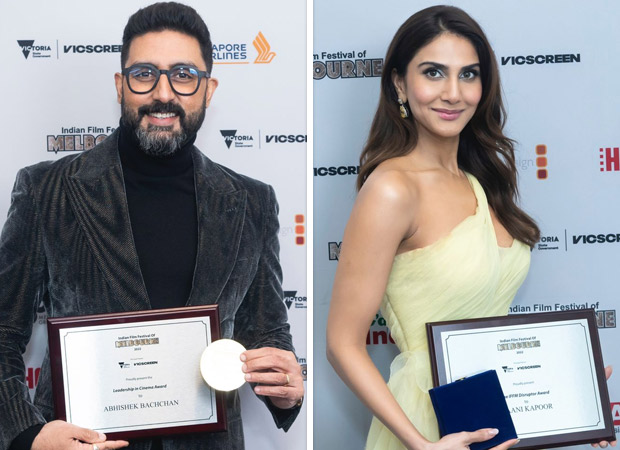 This year IFFM 2022 also had an impressive lineup of films, short films, documentaries representing Indian cinema and from the neighbouring countries. In case of awards, the Leadership in Cinema Award was given to Abhishek Bachchan. Vaani Kapoor was awarded with Disruptor in Cinema award for her path breaking performance in Chandigarh Kare Aashiqui.

After her winning Vaani Kapoor said, “It’s so special and kind of Indian Film Festival of Melbourne and Mitu to recognise such a film and giving so much dignity, respect and love and accepted it and to have a great inclusion of Chandigarh Kare Aashiqui in a film festival. It feels so special and surreal.”

On the other hand, Abhishek Bachchan expressed his gratitude adding, “I thank IFFM for giving me Leadership in Cinema award, I am extremely ecstatic being considered for this prestigious award by the Victorian Government and the film festival. Even though this award is not for the best actor, I am very much certain to come back to the festival soon enough for the best actor award too as I am certain I’ll soon get it.”

Besides that, the team of Jalsa starring Vidya Balan, Shefali Shah directed by Suresh Triveni and produced by Vikram Malhotra of Abundantia Entertainment was awarded with the Equality in Cinema Award along with the Best Actress award for Shefali Shah. Meanwhile, former cricketer Mr Kapil Dev was awarded with Lifetime Achievement Awards. Filmmakers Shoojit Sircar and Aparna Sen won for Sardar Udham and The Rapist respectively. Mohit Raina and Sakshi Tanwar also received Best Actor and Actress award for their Web Series, Mumbai Diaries 26/11 and MAI respectively.

Spearheaded by director of the film festival Mitu Bhowmik Lange, this year IFFM started physically this year and was also available virtually as it was held from August 12 to August 20, 2022. It is the only Indian film festival backed by the Australian government and this year, it showcased more than 100 critically acclaimed movies.

Also Read: Ranveer Singh wins Best Actor of the Year Award for 83 at the Indian Film Festival of Melbourne