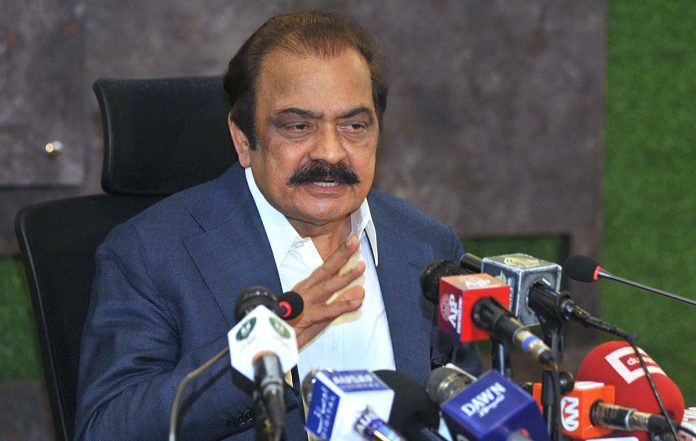 
A First Information Report (FIR) was registered against Interior Minister Rana Sanaullah on Thursday at the Industrial Area Police Station, Gujrat for allegedly intimidating and threatening the judiciary and the government officials.

The FIR, a copy of which is available with The Express Tribune, was registered on the complaint of a citizen, Aslam, under Section 7 of the Anti-Terrorism Act (punishment for acts of terrorism), and sections 353 (assault or criminal force to deter public servant from discharge of his duty), 186 (obstructing public servant in discharge of public functions), 189 (threat of injury to public servant) and 506 (punishment for criminal intimidation) of the Pakistan Penal Code.

The complaint said that Sanaullah, during his speeches on April 16, 2021 and January 29, 2022 had threatened to stop judiciary from performing its constitutional duties and kill children of government officials.

The FIR also reproduced the interior minister’s remarks, which according to it were aired on a private TV channel programme on August 21, 2022.

“The purpose of Sanaullah’s statements was to terrorise the judiciary, chief secretary, commissioner, government officials and people of the country,” the FIR said. “His aim was to stop the officials from working and prevent them from fulfilling their lawful responsibilities.”

The report said that Sanaullah’s remarks had created fear in the judiciary, administration, bureaucracy, police and the nation.

It was pleaded in the FIR that the interior minister should be investigated for his remarks and be taken to task “to create an example for other citizens speaking against government officials”.

The development was also shared by Punjab Home Minister Hashim Dogar on Twitter. “Today, the police registered an FIR against Rana Sanaullah at Industrial Police Station in Gujrat for threatening the honourable judiciary and government officials. The allegations are [of a] serious [nature] and action will be taken according to Constitution and law.”

PML-Q leader Moonis Elahi also took to his official Twitter handle with the news saying that Sanaullah made a “false case” against PTI Chairman Imran Khan. “Now the people have made a true case against you,” he said, adding that the interior minister would soon be arrested.

Moonis was referring to a terror case filed against Imran for “threatening” a female judge and senior police officers in a Islamabad rally on Saturday that had drawn strong criticism from the government, with the interior minister declaring that the PTI chairman would not be allowed to challenge the writ of the state by inciting rebellion.

The petition was filed by a lawyer named Ali Ijaz Buttar in the Islamabad High Court (IHC).

PML-N leaders Attaullah Tarar and Marriyum Aurangzeb have also been made parties to the said petition.

The petitioner contended that social media revealed that Maryam and others do not respect institutions, including the judiciary. However, he added, they are running governmental affairs.

He said that the parties repeatedly used derogatory language about the judges of the high court.

He added that through these statements, questioning the credibility of the justice system, an attempt was made to undermine the public confidence in the judiciary.

The petitioner also submitted the transcript of Maryam’s July 25 news conference with his petition. He also requested that the Pakistan Electronic Media Regulatory Authority (Pemra) chairman be directed to submit the transcript of the pressers against the judiciary.

The petition requested the initiation of contempt of court proceedings against Maryam and others.