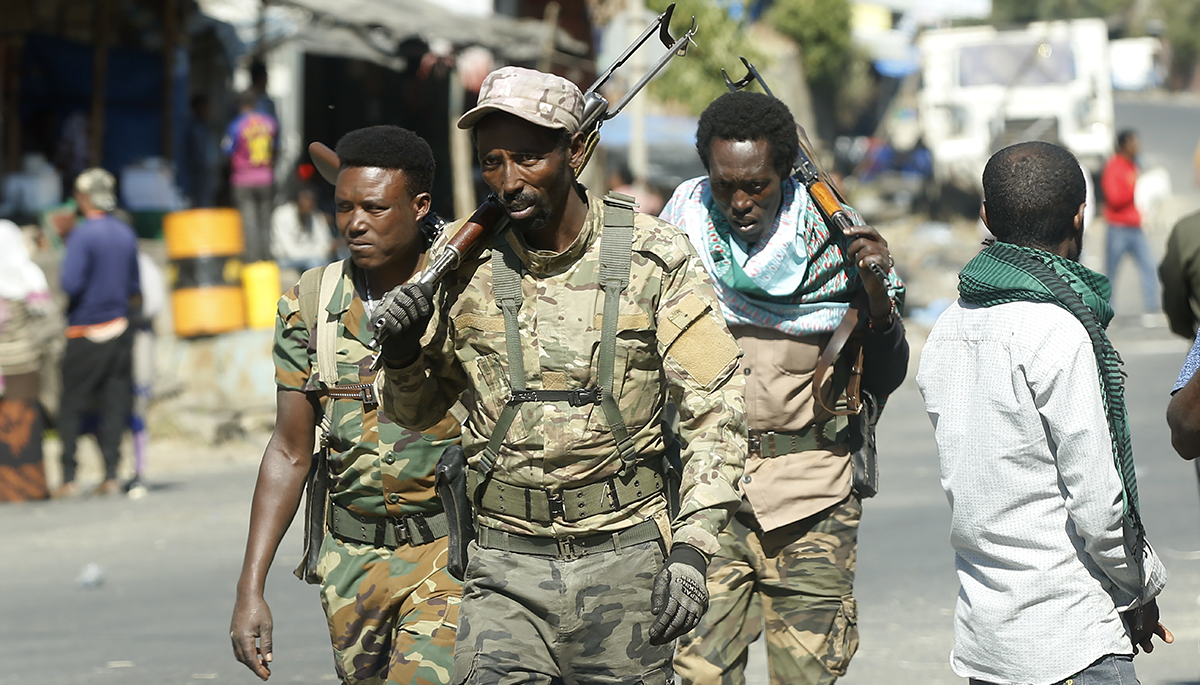 Ethiopia is Iranâ€™s gateway to the Horn of Africa and the broader East Africa region. By helping Ethiopia in its ongoing conflict with the rebel Tigray Defense Forces (TDF), which represent the Tigray ethnic minority, Iran is preserving its so-called strategic depth in the region to bolster its influence. This enables Iran to project power in distant continents and engage in geopolitical maneuvering in Africa, while containing its adversaries and rival powers.

As far as Tehran is concerned, given the recent waves of political turmoil in African countries where it had once enjoyed influence, such as in Tunisia, Sudan, and South Africa, the conflict in Ethiopia might even have something to do with Prime Minister Abiy Ahmed Aliâ€™s friendly disposition toward Iran. Since 2018, the two countries have defended the Iranian nuclear program and non-military political intervention to end the Yemen conflict. Ethiopiaâ€™s relative isolation from political, naval, and security initiatives led by the littoral states of the Red Sea â€” Egypt, Saudi Arabia, Sudan, Djibouti, and Eritrea â€” and Addis Ababaâ€™s differences with neighboring countries such as Sudan, may have encouraged Prime Minister Abiyâ€™s pivot toward more distant and friendlier countries like Iran.

Iran has also tried to engage with the Ethiopian PM over other shared challenges, including the outcome of civil and armed conflicts in Sudan and Somalia. To achieve these goals, Iran has encouraged Ethiopia to use Tehranâ€™s counter-terrorism expertise.

More importantly, Iran has tried to build corridors of influence in Ethiopiaâ€™s conflict zone in Tigray, where U.S. interests are at stake. Once seen as a partner for the United States, Ethiopia is now admonishing Washington for demanding a halt to the deadly conflict with the TDF, which broke out in November 2020 after the Ethiopian National Defense Force (ENDF) came under attack by the Tigray Peopleâ€™s Liberation Front (TPLF) and subsequently captured the capital of the Tigray region, Mekelle.

Ethiopia has also rebuffed attempts by the United States to work with the Tigray to deliver humanitarian assistance, signaling that it does not trust Washingtonâ€™s intentions. This could create an opening for Iran to bring Ethiopia into its sphere of influence and potentially even encourage Tehran to lead operations of its own against terrorists such as al-Qaeda, ISIS, and al-Shabaab.

Tehran also needs the Ethiopian security forces on its side to contain Israelâ€™s historically stronger bonds with the African nation. An arms supplier to Ethiopia, Israel reportedly turned down requests by Addis Ababa to supply Kamikaze drones. According to news sources in Iran citing the Israeli intelligence website Debkafile, Israel has had past contacts with the Tigray.

If this is true, Iran may see an opportunity to showcase its military equipment to Ethiopiaâ€™s government. This is despite the fact that the complex ethnic conflict with the Tigray may make it difficult for Iran to play a significant role as a distant actor.

Yet by building a presence in Ethiopiaâ€™s pre-existing conflict with the TDF, Iran could emerge as an alternative partner for Ethiopiaâ€™s embattled government. The TPLF says Iran is intensifying the conflict by offering aid to Ethiopiaâ€™s government.

A surge in the use of drones in Africa supplied by Israel may be one reason why Iran has reportedly established air routes to Ethiopia to help with the conflict and supplied its own drones. Ethiopiaâ€™s government rejects reports that it has received the equipment, but Iranâ€™s Mohajer-6 drone appeared in a video of Prime Minister Abiy at the Semera airfield in the Afar region near Tigray in early August 2021, after the TDF captured Mekelle and vowed to take over Addis Ababa.

Iran could also contemplate selling arms to Ethiopia after the United Nations eased restrictions on Iranian arms sales in October 2020 under U.N. Security Council Resolution 2231. News sources close to the Islamic Revolutionary Guards Corps (IRGC) confirm that if Iranian drones can help quell the Tigray rebellion, this success would attract customers for Iranian arms in Africaâ€™s lucrative markets for weapons.

Clearly, Ethiopia is now part of a larger theater for Iranian power projection beyond its borders. Iran has not confirmed if it sent drones to Ethiopia, but the IRGC-affiliated Tasnim News Agency says the Mohajer-6 spotted in the African country resembles drones Iran delivered to the Hashd-al-Shaabi or Popular Mobilization Forces in Iraq and to Venezuela. The drone is cheap and easy to operate, can mount a missile or bomb like the Iranian-made Ghaem or Sadid, is equipped with the Tiam and Taha 1400 surveillance and interception systems, and is mass produced by the Quds Air Industry.

Iranâ€™s other goals in Ethiopia are as grand as its security objectives. Tehran wants to boost trade in Africaâ€™s future markets and through the continental railway in East Africa. Deemed one of Africaâ€™s fastest-growing economies in recent years, Ethiopia wants to keep Iran as its third biggest market in the Middle East, while Ethiopia remains a top destination for Iranian exports of goods and services.

In the first 10 months of 2018, Ethiopia exported almost $31 million of products to Iran. In 2017, the figure for Ethiopian exports to Iran stood at $50 million, while Iranâ€™s exports to Ethiopia totaled around $12 million. While the figures were modest, they represented a good portion of Iranâ€™s roughly $300 million in exports to Africa.

Iran also wants to safeguard its soft power influence in the African Union, which is based in Addis Ababa, as well as protect a long-standing cultural agreement with Ethiopia in effect since 1989 and promote Shiâ€™a Islam in the African nation. Shortly after the outbreak of the Ethiopian conflict, Iran was holding religious talks in the country.

Moving forward, the advancement of Iranâ€™s influence in Ethiopia will remain partially conditional on real progress in its ties with Addis Ababa and the extent to which the two can derail efforts by rival powers to contain them. This suggests that Iranâ€™s security influence over the African nation may continue to grow as long as the conflict with the Tigray people remains unresolved.

Banafsheh Keynoush is a foreign affairs scholar, a non-resident scholar with MEIâ€™s Iran Program, and a fellow at the International Institute for Iranian Studies.Â The views expressed in this piece are her own.