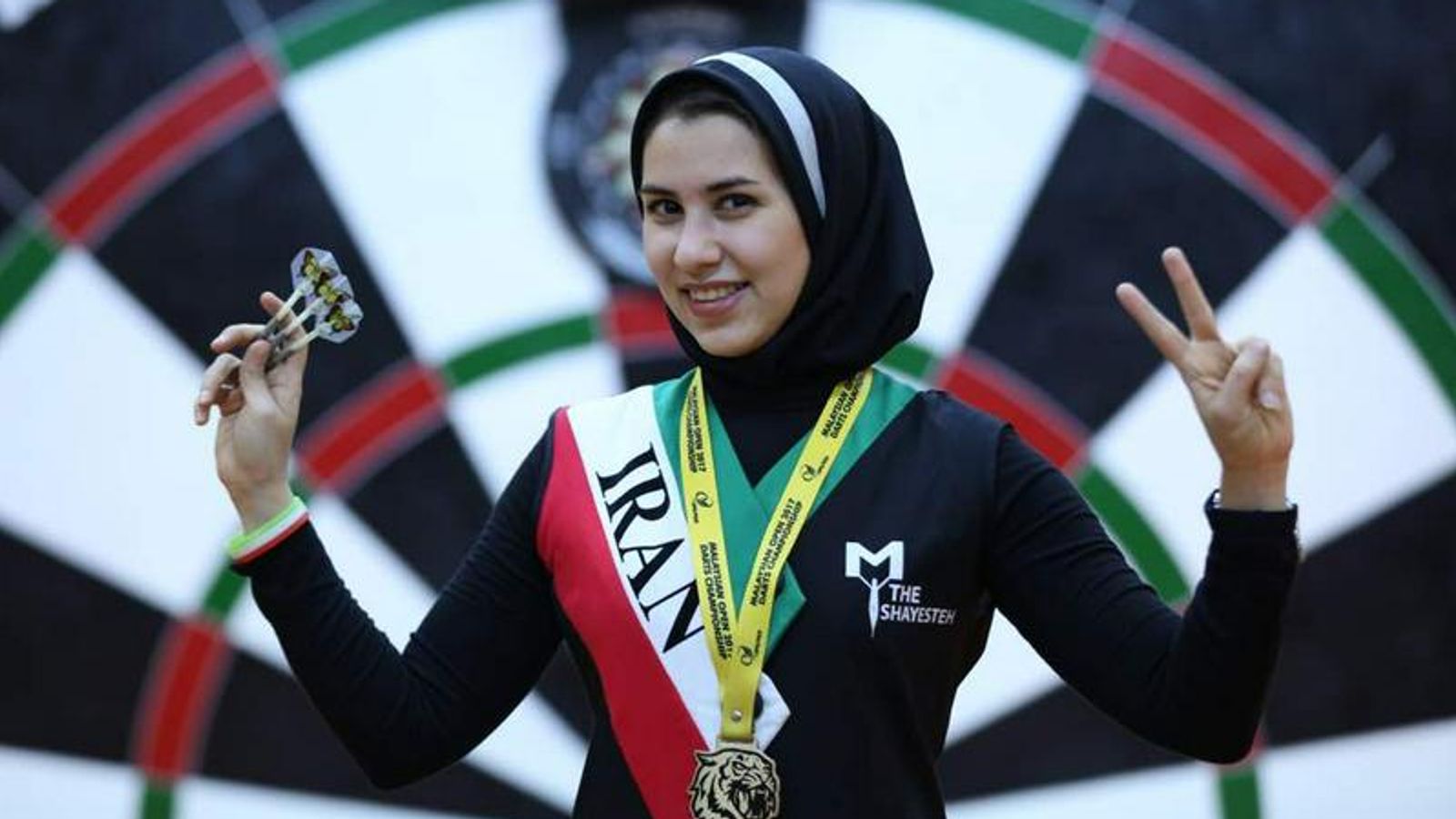 The term ‘trailblazer’ is often a derivative sporting clichÃ©, although in the case of Mozhgan Rahmani, that description could not be more pertinent.

The 30-year-old is the first Iranian to feature in PDC competition and she is aiming to prove that gender is no obstacle by moving to England to fulfil her World Championship dreams.

Rahmani is not your stereotypical darts player. She had never thrown a dart prior to 2015 but her unwavering desire to create history has seen her make sacrifices and strides in equal measure.

Her academic credentials include a bachelor’s degree in industrial engineering, but she has quit her job and left her master’s degree university course to pursue her ambitions of becoming a full-time professional.

“I went back to university for my master’s but I left because of darts,” Rahmani told Sky Sports. “My parents were sad about that but they respected it for me because I chose darts for my life.”

Rahmani’s darting journey began in 2016 when she attended a local event as a spectator. She received instant acclaim for her natural talent after stepping up to the oche herself, prompting organisers to gift her a board that she used to practice on at home in Tehran.

“When I finished my study at university, I went to a club near my home and suddenly I saw the head coach for the national darts team in Iran, Mehdi Shayesteh. He started to coach me – 2016 until now.

His faith was vindicated as Rahmani reached the final of her first national competition just five months after turning professional, before she scooped Shiraz Open and Malaysian Open titles in 2017 – elevating her to 28th on the WDF rankings.

Rahmani also stormed to glory in the women’s singles, having made history months earlier by making her debut on the PDC Asian Tour in the Philippines – becoming the first Iranian to feature in a PDC event.

Darts has enjoyed immeasurable growth in Asia throughout the last decade and there are signs of encouragement in Rahmani’s bid to subvert the enduring barriers in her path.

Iran were runners-up to Netherlands in the 2017 WDF Youth World Cup courtesy of Deniz Hashtbaran winning the girls title and also the pairs title alongside Mahshad Avazzadeh.

Rahmani believes that success has helped inspire a new generation of talent and she is contributing to this growth by coaching young prospects at her local darts club in Tehran – encapsulating her unceasing passion for the sport.

“Now darts is starting to become famous in Iran. I became champion in Malaysia in 2017 and nobody believed that a girl from Iran reached the final and beat Cathy Leung, who is a famous player in Asia,” she added.

Rahmani’s success has largely come against fellow females, but she has designs of following in the footsteps of Lisa Ashton and Fallon Sherrock – both of whom created headlines with their exploits at Qualifying School and Alexandra Palace.

“I saw Fallon Sherrock last year at the PDC World Championship and I really enjoyed seeing a lady on the stage,” she added.

“Fallon showed to all ladies – believe that we can beat men, and that darts is a sport for everyone. I think I can achieve anything if I give my heart to darts.”

Two-time women’s world champion Mikuru Suzuki is another source of inspiration for Rahmani. ‘The Miracle’ is one of the sport’s biggest stars in Asia and featured in last year’s PDC World Championship after advancing through the women’s qualifier in Germany.

Rahmani was planning to attend last November’s qualifier in Hildesheim but visa complications saw her hopes crushed. Having given up so much in pursuit of her dream, this felt like a potentially definitive blow.

“Last year I practiced a lot for the PDC women’s qualifier in Germany. I did my best to get a visa. Many people told me this is impossible for you,” she continued.

“The embassy gave back my passport and Germany rejected me. I was really sad about that because I wanted to go to the Turkish Open also but I couldn’t because my passport was in Germany.

“I lost all my chances to play in Turkey, Prague and Germany and I was really down. I wrote a post on Facebook that I’m doing my best in darts, but sometimes matters are out of my control because I’m Iranian and I wrote: ‘I am tired of fighting, but I know I should never give up’.”

However, Rahmani’s persistence paid dividends. The darting community rallied around to resolve her visa issues which gave her the opportunity to compete in this year’s Dutch Open.

“Paul Brown saw my post. He is the manager of the BDO champion – Wayne Warren. He wrote a comment and said ‘Mozhgan, we will see you at the Dutch Open’. He helped me get there with a couple from the Netherlands, Arie and Monika.

“I now have a manager called Ross Hampton, from England. He helps me with anything in darts. I am very happy to have good people around me.”

Such is her notoriety, she even has her own custom-made darts in steel-tip and soft-tip courtesy of her sponsor Kenny Chen at Cuesoul, and she is eyeing a career in both formats in the near future.

Rahmani had huge aspirations for 2020 which included a return to the PDC Asian Tour, but the coronavirus crisis curtailed those plans. However, like many of her peers, she has embraced the sport’s ‘new normal’ through the thriving online darts concept.

The Iranian has appeared in several online tournaments – one of which resulted in a narrow 6-4 defeat to Dirk van Duijvenbode.

Van Duijvenbode appeared in two ranking semi-finals following a stunning start to 2020 but Rahmani insists she was unfazed by the prospect of taking on the mercurial Dutchman.

“It is a really good experience for me to play against men. Dirk is a very good player but I was not scared of him. I said to him, ‘you are not my opponent, my opponent is the board and I focus on the board, not you’.”

Following the dream to England

Rahmani’s steadfast determination has been integral to her success, yet having already made innumerable sacrifices during the fledgling stages of her career, she is poised to embark on her most courageous decision yet.

Stay up-to-date with the latest news from around the darting world.

“After lockdown, I will leave Iran and I will go to England,” Rahmani confirmed. “I will move my life because of darts. I will do anything for darts in my life.

“My manager is helping me to try and get a sports visa for one year in England and I know I should do my best in darts within one year.

The diverse nature of the PDC circuit underlines the game’s increasingly global appeal and Rahmani is testament to that evolution. Darts is also a sport synonymous with fairy-tale stories, and now Iran’s tungsten pioneer is bidding to write her very own chapter.