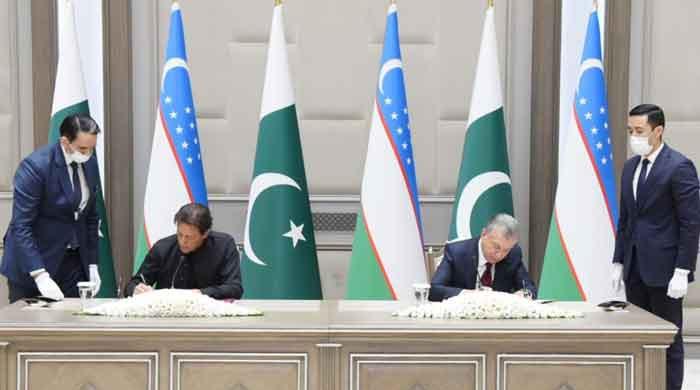 TASHKENT: Prime Minister Imran Khan announced that Islamabad and Tashkent will develop a film on Zaheer ud din Babar, the first Mughal emperor, to educate the young people of both the countries of the shared heritage between the two nations.

â€œ[It] is extremely exciting that we have decided now to make a film on the first of the great Mughals, Zahreeruddin Babar,â€ said PM Imran Khan in a joint press conference with Uzbek President Shavkat Mirziyoyev.

The prime minister said that Babarâ€™s dynasty ruled India for 300 years, when India was considered as â€œone of the richestâ€ places in the world.

â€œI think the young people in Uzbekistan and Pakistan must know this connection that stayed for hundreds of years between this part of the world and our part of the world,â€ said PM Imran Khan.

He added that he felt that the film would and other similar films on Mirza Ghalib, Allama Iqbal and Imam Bukhari would connect the people of the two regions together.

â€œWe hope that this will be the beginning of a strong cultural exchange between the two countries. As our countries get closer [â€¦] I will introduce cricket to the people of Uzbekistan,â€ said the prime minister.

President Mirziyoyev agreed with PM Imran Khan about the importance of the youth knowing about the heritage left behind by Babarâ€™s dynasty. He also informed the Uzbek audience that not many youngsters of the country know that in in Lahore, Pakistan, there are a great number of mosques, mausoleums, and schools that were built by his countryâ€™s predecessors.

â€œWe should say that this is just the beginning. I look forward to visiting Pakistan in order to see those very places that have the touch of our ancestors and to see the life in Pakistan and people of Pakistan,â€ said the Uzbek president.

PM Imran Khan, in the media briefing, informed the Uzbek president of Pakistan’s shift in priority from geostrategy to geoeconomics.

“The idea is to create wealth. If we create wealth then we can spend it on our lower strata of society and lift them up,â€ said PM Imran.

He added that for this it is extremely important for Pakistan to have a â€œstrong trading relationship with Uzbekistanâ€.

â€œIt will be a win-win situation for both Pakistan and Uzbekistan. So you [President Mirziyoyev] can imagine the amount of interest in Pakistan for the trading ties and economic ties between our two countries,â€ said PM Imran Khan.

The prime minister said that the relationship would benefit Uzbekistan as Pakistan is a huge market itself and it can give Tashkent access to Middle East and Africa from the Pakistani ports.

He emphasised that to improve connectivity there was a need to improve air and land routs between the two countries.

The premier also told the Uzbek president that Pakistan is excited about the rail project between Uzbekistan, Afghanistan and Pakistan.

PM Imran Khan said that he and the Uzbek president also discussed the political situation in Afghanistan in detail.

He added that he and President Mirziyoyev agreed that Afghanistanâ€™s neighbours Uzbekistan, Tajikstan, Iran, Pakistan and Turkey will try to help and facilitate the peace process in Afghanistan.

â€œFor that we hope that our foreign ministers will first meet and then go on and try to have a summit so that we can stop what looks like a civil war,â€ said the premier.

Both the sides, after the talks, signed a 40-point â€œJoint Declaration on the Establishment of Strategic Partnership between Uzbekistan and Pakistanâ€

In the joint declaration both the leaders agreed to increase cooperation and reaffirmed their commitment to support each other at international forums, including the Shanghai Cooperation Organisation.

The statement said that the two leaders also discussed Afghanistan in detail and both the leaders appreciated their countryâ€™s efforts for peace in Afghanistan.

Separately, Foreign Office (FO) spokesperson said that both the countries signed a number of memorandum of understandings (MoUs) and agreements.

The MoUs and agreements signed included the exchange of Pre-Arrival Information on Goods; Transit Trade; Cooperation in the Field of Military Education; and Simplification of Visa Procedures for Businessmen and Tourist Groups.

The MoUs were also signed between Foreign Service Academy of Pakistan and University of World Economy and Diplomacy of Ministry of Foreign Affairs of Uzbekistan; Cultural Exchange Programme 2021-2026; and on matters relating to Tourism.

Before the talks, the Pakistani PM Office said that PM Imran Khan after addressing the forum was welcomed at Koksaray Presidential Palace in Tashkent.

Upon his arrival the PM was given a guard of honour.

Earlier, PM Imran assured Uzbekistanâ€™s business community that his visit is the beginning of the â€œjourney of development and prosperityâ€.

â€œI want to assure the business community of Uzbekistan that this relationship is just the beginning of the journey of development and prosperity,â€ said PM Imran Khan while addressing the Uzbekistan-Pakistan Business Forum on â€˜Central and South Asia 2021: Regional Connectivity Challenges and Opportunitiesâ€™, in Tashkent.

PM Imran Khan assured the businessmen and traders of Uzbekistan that Pakistan would extend them every possible facilitation in promotion of trade.

The PM, who is on a two-day visit, said that Pakistanâ€™s connectivity with Uzbekistan in trade and bilateral spheres would open up new avenues of prosperity in the region.

â€œPakistan has immense potential to connect Central Asia with rest of the world and become a hub of trade,â€ the prime minister said.

The prime minister said the railway project among Pakistan, Uzbekistan and Afghanistan would be a harbinger of development. He stressed that to exploit the regionâ€™s potential, peace and security in the neighbourhood was essential.

On the situation in Afghanistan, he said peace in the war-torn country was important to ensure materialisation of development projects in Central Asia.

â€œPakistan is keen for peace in Afghanistan and considers it vital for trade connectivity among the regional countries,â€ he said, adding that such trade linkages help in raising the living standards of the citizens.

PM Imran Khan referred to the cooperation among the neighbouring countries of the European Union, that focused on bilateral trade arrangements for the benefit of their people.

He hoped that with the support and will of the regional states, the situation in Afghanistan improves.

The prime minister said Pakistan and Uzbekistan enjoy relations rooted in common faith, culture and history and which offer a unique dimension to the two nations to explore each other in diverse areas.

Earlier, Prime Minister of Uzbekistan Abdulla Aripov, in his speech, mentioned the strong ties between Pakistan and Uzbekistan in multiple areas of cooperation.

He welcomed PM Imran Khan on his official visit to Uzbekistan, which he said would usher in a new area of cooperation and joint ventures between the two brotherly countries.

Soon after his arrival, the premier visited the Independence and Humanism Monument with his Uzbekistan counterpart and laid a wreath.

Foreign Minister Shah Mahmood Qureshi, while giving an update on the PMâ€™s two-day trip, said that Pakistan and Uzbekistan had vast potential to explore the opportunities of bilateral trade and investment for their mutual interest.

The foreign minister said that businessmen from both the countries have shown immense interest in bilateral engagement.

He said that the Pak-Uzbek Business Forum was attended by around 130 representatives of leading companies and business houses from Pakistan.

He said the activity resulted in signing of agreements worth $453 million and hoped that it would lead to further strengthening of bilateral trade.

On the other hand, Information Minister Fawad Chaudhry in a video message, said that PM Imran Khan’s visit to Uzbekistan will open new avenues of economic and security cooperation among Pakistan, Uzbekistan and the Central Asian States.

Chaudhry said that the PM is on the two-day trip with two important objectives: the enhancement of travelling facilities among Pakistan, Afghanistan and Uzbekistan, and peace in Afghanistan.

â€œWe want that any truck or train loaded at Karachi and Gwadar Port reaches Tashkent, which will increase Pakistan’s trade with the Central Asian states manifold,â€ said the information minister. He added that an important conference will be held on Friday in which regional connectivity will be highlighted.