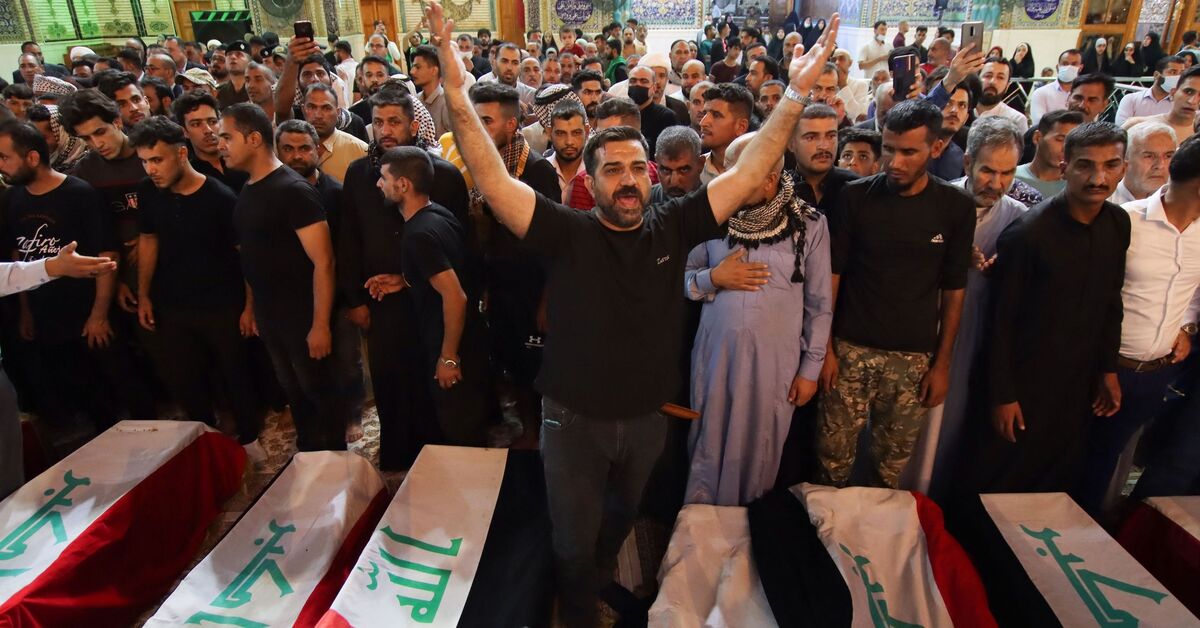 By the end of day IS had taken responsibility for the attack, which happened northeast of Baghdad in Diyala province near the town of al-Udhaim (also known as al-Azim), which lies on the main road between Baghdad and Kirkuk.

All of the men at the post were killed.

Diyala province has long been one of Iraqâ€™s most problematic in terms of IS activity, with areas disputed between the central government and the Kurdistan Regional Government resulting in security gaps and issues with intelligence sharing.

The Hamrin mountains, which have for decades served as a hiding place for various insurgent groups, run through the province from near the Iranian border and then cuts across the country, acting as a dividing line between Kirkuk and Salahuddin provinces on its westernmost edge.

Photos of the site where killings took place showed a flat expanse with no hills or groves of trees in sight. Streams of bright red blood can be seen on the ground near a lookout position with a low dirt embankment and cement bricks providing scant protection.

According to the website of the Arabic-language Iranian broadcaster al-Alam, the â€œterrorist attack was carried out by a cell consisting of nine membersâ€ of IS. The report added that the cell had come from areas of Kirkuk province including Riyadh and south of Hawija, â€œtaking advantage of the Hamrin hills through Salahuddinâ€ to conduct the attack.

TheÂ security forces had been trying to keep fires burning nearby the checkpoints to warm themselves and the bonfires and heavy fog appear to have helped IS carry out the attack.

A photo of the small building where most of the men had been sleeping shows a stack of blood-stained khaki flak jackets, messy stacks of paper and wooden ammunition crates on the rough concrete floor.

Diyala province has long been used by IS cells to conduct hit-and-run attacks and kidnappings.Â It was where the Jordanian-born leader of al-Qaeda in Iraq, Abu Musab al-Zarqawi, wasÂ killed in a 2006 airstrike.Â Repeated operationsÂ by theÂ regional operations command,Â which often finds large weapons stashes, have failed to entirely eliminate the cells.

In April 2020, a Diyala security officer had told Al-MonitorÂ that IS had begun to conduct attacks during the day and â€œuses groves of trees between Kulajo and Jalawla to hide inâ€ close to the Iranian border.

When reporting from Kalar in the Garmian administration north of Diyala in September 2020, this journalist was told by a security official who works in areas disputed byÂ the central government in Baghdad and the KRG that kidnappings, especially in those areas, remainÂ a major source of funding for terrorist groups in Iraq.

However, â€œIf they are not Asayish, or peshmerga or the Iraqi army, then they will demand a ransom. If they are part of the security forces then they kill them,â€ he said.

An Oct. 26 attack last year in Diyala had set off furtherÂ sectarian killings and displacement. At least 11 Shiite members of a tribeÂ were killed in the attack, and their fellow tribesmen went en masse to a nearby Sunni village, killing members of the community and burning down homes in revenge for what they claimed was â€œcollusionâ€ with IS. Many residents fled out of fear to neighboring provinces.

Udhaim lies further west, close to Salahuddin, on the other side of Hamrin Lake from Jalawla.

A police colonel was kidnapped along with two friends while they were on a fishing trip near Hamrin Lake on Dec. 13. IS published photos of his corpse two weeks after he was kidnapped.

South of Udhaim, the road to the capital runs close to Tarmiya, near where two members of the local Popular Mobilization Units were killed Jan. 18. An operation conducted the morning after in collaboration with the Iraqi National Security Service killed three IS fighters in a nearby area.

Since the international terrorist group lost its lastÂ territorial holdingsÂ in the country in late 2017,Â much of its activity has been concentrated in areas disputed between the central government and Iraqi Kurdistan in the northern part of the country.

Funeral processions for the soldiers began later in the day in both Baghdad and Karbala.

Prime Minister Mustafa al-Kadhimi, who is also commander-in-chief of the armed forces, chaired an emergency meeting of the security forces and military leaders after the attack. He vowed to hold â€œall negligent parties accountable regardless of their position and rank,â€ according to a statement sent to Al-Monitor.

He ordered an assessment of the military and security services deployed to Diyala province and also called for tightened border control following an attack on detention facilities holding Iraqi and Syrian IS suspects in northeastern Syria.

Security measures have been stepped up in Baghdad in recent days, with more military vehicles seen patrolling the streets and low-flying helicopters in the freezing cold.