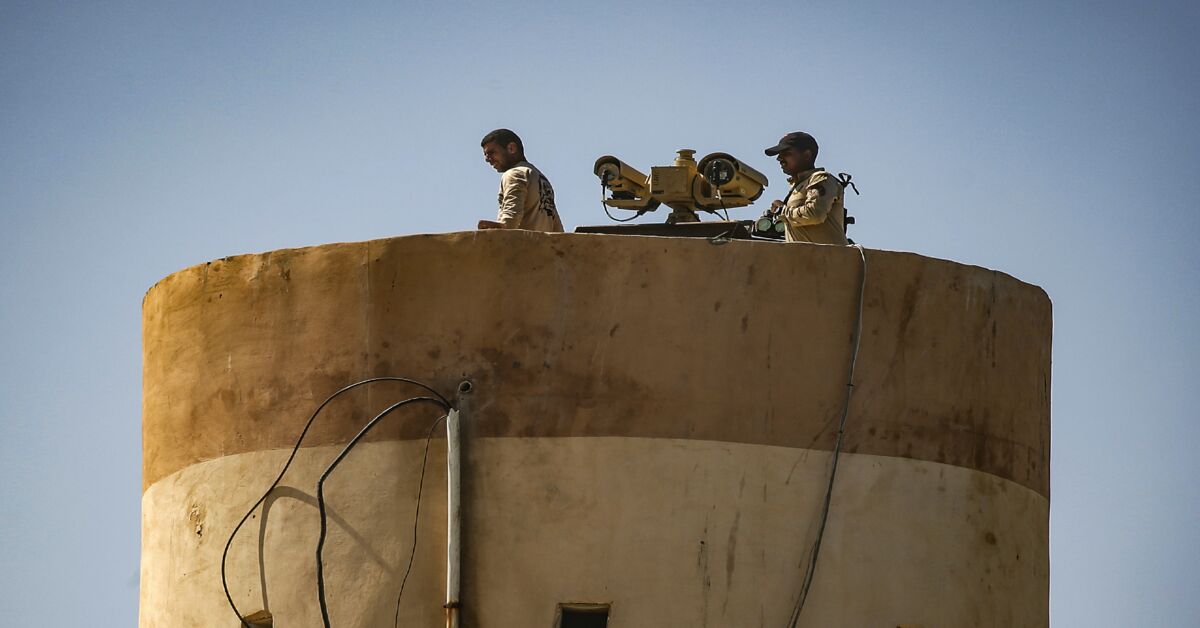 Egypt has announced it will ramp up military troop deployment near the Rafah border with the Gaza Strip in a bid “to strengthen national security.”

According to a statement published Nov. 8 by Egyptian armed forces spokesperson Gharib Abdel Hafez on his official Facebook page, “A joint military committee succeeded (during a coordination meeting with the Israeli side) in amending the security agreement to increase the number and capabilities of border guards near the Rafah crossing.”

The security agreement cited by Abdel Hafez is an annex to the 1979 Camp David Peace Accords signed by late Egyptian President Anwar Sadat and then-Israeli Prime Minister Menachem Begin allowing Egypt to maintain a civilian police force only in the eastern strip of the Sinai Peninsula. That, however, has changed in recent years with the warming of ties between Cairo and Jerusalem and Egypt’s ongoing military campaign against Islamist jihadi groups waging an insurgency in the northern Sinai Peninsula.

Not only has Israel turned a blind eye to the annex of the Camp David Accords banning the presence of significant Egyptian forces in the area, the Jewish state has also cooperated closely with Egyptian security forces in their war on terrorism in the restive Sinai Peninsula, including by “carrying out a covert air campaign, conducting more than 100 airstrikes (against jihadi targets) inside Egypt,” according to a New York Times report published Feb. 3, 2018.

While President Abdel Fattah al-Sisi admitted in a January 2019 CBS interview that security cooperation with Israel “is tighter than it has ever been,” the extent of that cooperation has not been made public partly because of a news blackout on security developments in the northern Sinai Peninsula. The Egyptian authorities are also aware that warmer ties with Israel may provoke public discontent. While many Egyptians are not averse to trade with Israel, the Egyptian public is wary of deepening ties with the Jewish state until a just and durable peace with the Palestinians is achieved.

The Nov. 7 deal struck between senior Egyptian and Israeli military officers during their meeting in the Red Sea resort city of Sharm el-Sheikh has brought the joint collaboration between the two allies to light. Israel has now officially given the Egyptian military greater control over the border area and greater leeway to operate against the Islamic State (IS)-affiliated militant groups in the northern Sinai Peninsula, enhancing its own security in the process. Sinai Province (Wilayat Sinai), IS’s Egypt affiliate, has in the past fired rockets from the Sinai Peninsula into Israel, claiming responsibility for the attacks in the Eilat region. In one such assault carried out in July 2015, the group said it had acted in retaliation for “Israeli support for the Egyptian army.”

Senior military strategist Samir Farag welcomed the recent agreement between Egypt and Israel, saying it has made members of the Egyptian armed forces “very happy.” He explained that under the Camp David Accords, the Sinai Peninsula was divided into three zones: A, B and C.

“The Camp David Treaty regulated the presence of forces in the Sinai, allowing only civilian police forces to be deployed to zone C — the area nearest to the shared border with Israel,” he told Al-Monitor.

He continued, “In recent years, we (the Egyptian armed forces) have been fighting against terrorists in Rafah, El Arish, Sheikh Zuweid and Jabal El-Halal, all of which are located in zone C; we had to seek Israel’s permission before dispatching military forces and armaments to cleanse those areas of terrorist elements.”

“The recent agreement has made it possible for Egypt to have an increased military presence in zone C along the border with Israel,” Farag said. The agreement —  which was signed on the Israeli side by head of the Operations Directorate Maj. Gen. Oded Basiuk, head of the International Cooperation Division Brig. Gen. Effie Defrin, and head of the Strategic Planning and Cooperation Directorate Maj. Gen. Tal Kelman — had first to be approved by Israel’s State Security Cabinet as this is “a political rather than a military decision,” he added.

Describing the decision as “a win-win,” Farag argued that “Israel has given the green light for the increased military presence along its southern border for the sake of rooting out the extremist threat in the Sinai Peninsula.”

“Israel is already targeted by Hamas and Hezbollah; it does not need to be fighting on another front. The agreement is mutually beneficial for both Egypt and Israel,” he said.

An Israel Defense Forces spokesperson told Al-Monitor, “The decision to amend the security agreement was made for the benefit of the two countries (Egypt and Israel); it was based on a common understanding of the security needs and challenges both in the Rafah area and in the context of combatting terrorism.”

Maj. Gen. Samir Farag noted that the September talks between Sisi and Israeli Prime Minister Naftali Bennett held in Sharm el-Sheikh had paved the way for the recent agreement between Egypt and Israel as security challenges had featured in the discussions.

Hassan Nafaa, professor of political science at Cairo University, told Al-Monitor that both the latest agreement and Bennett’s recent visit, the first by an Israeli premier to Egypt in more than a decade, are clear signs of the warming relations between Egypt and its neighbor to the northeast. “It is clear that our relations have now moved from the cold peace that was prevalent in the days of Hosni Mubarak to more cordial relations with Israel under President Sisi,” he said.

Nafaa noted, however, that this is not the first time that Israel has given the green light to the Egyptian armed forces to deploy military troops and border guards to the Rafah border area. But this time the agreement is official and has been widely publicized, including in the local press.

“Israel is looking out for its own security, but it is also trying to win over Egypt as it recognizes the latter’s pivotal role in mediating a cease-fire with Hamas when the need arises, in negotiating prisoner swaps with Hamas and in the reconstruction of Gaza,” Nafaa said.

In May, Egypt succeeded in brokering a cease-fire between Israel and Hamas after 11 days of incessant violence — the worst between the two parties to the conflict since 2014. Meanwhile, Egypt’s Intelligence Chief Abbas Kamel is scheduled to visit Jerusalem in late November — his second visit since the new Israeli government was sworn in over the summer — to broker a long-term cease-fire in Gaza that includes a prisoner swap between Israel and Hamas.

Nafaa noted that Egypt’s relations with Hamas have also “improved significantly” since the rulers of the Gaza Strip have been cooperating with Egypt in the fight against terrorism in the northern Sinai Peninsula.

The improved ties with both Hamas and Israel can only boost Egypt’s role as mediator between the two conflicting parties. It also serves to enhance Egypt’s security. The significant reduction in terrorist attacks in the Sinai Peninsula and elsewhere in the country of late testifies to the fact that Egypt also needs the support of both Hamas and Israel to win the war on terror.