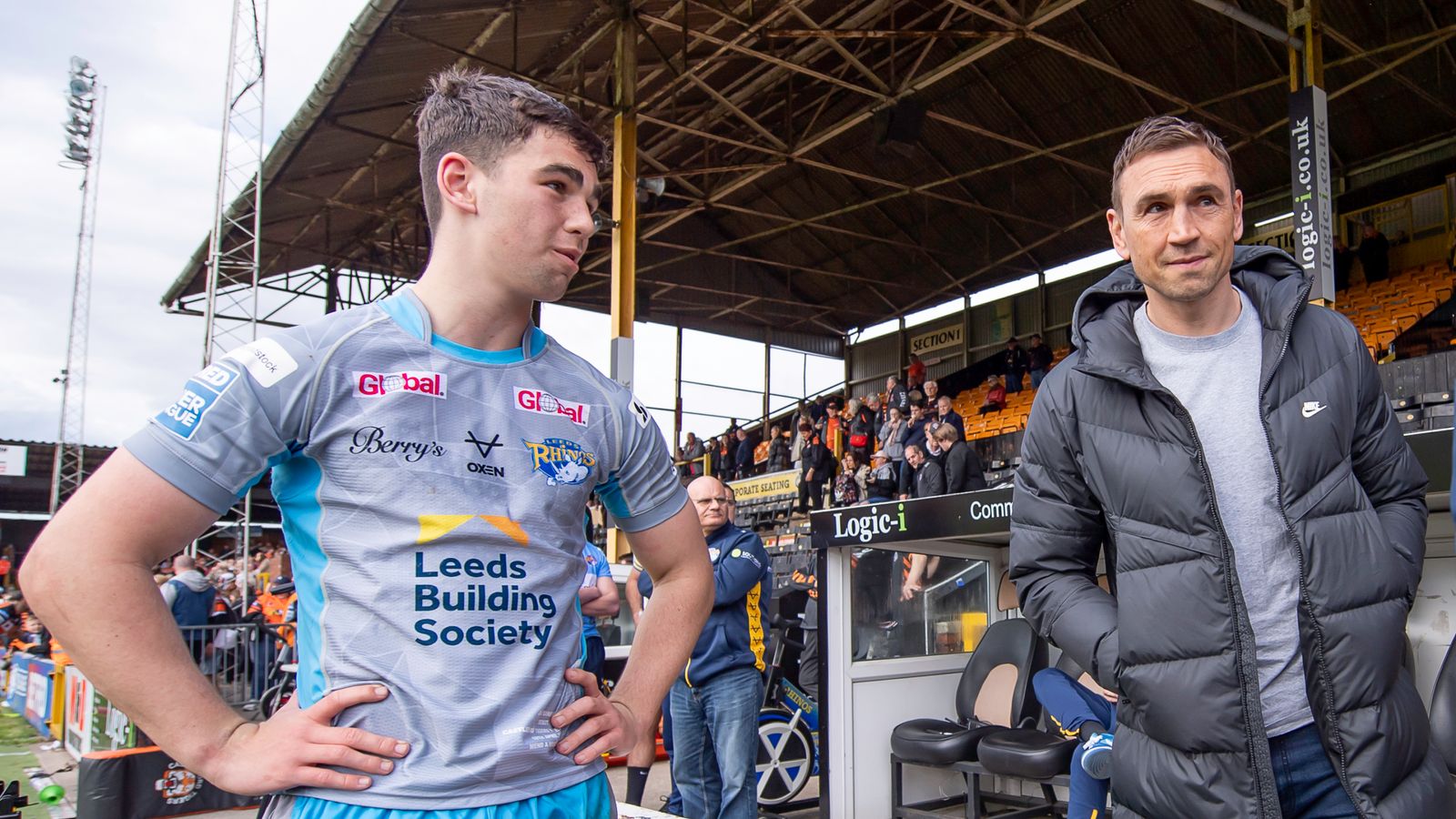 Jack Sinfield, the son of Leeds Rhinos icon Kevin Sinfield, one of two 17-year-olds making their Betfred Super League debuts in the 16-14 defeat to Castleford Tigers on Easter Monday; “The lads were great and looked after me, and made sure I was all right, so I can’t thank them enough”

Jack Sinfield admits to having some pre-match nerves ahead of his debut for Leeds Rhinos in the Super League clash with Castleford.

Jack Sinfield admits to having some pre-match nerves ahead of his debut for Leeds Rhinos in the Super League clash with Castleford.

Jack Sinfield revealed how he overcame pre-match nerves to make an encouraging start to his Leeds Rhinos career in the Betfred Super League.

The 17-year-old son of Rhinos icon Kevin Sinfield was handed his competitive debut on Easter Monday along with fellow teenager Max Simpson as the Rhinos travelled to West Yorkshire rivals Castleford Tigers.

An early misplaced pass perhaps underlined those nerves he was feeling, but Sinfield grew into the game and was even on hand to provide an assist for Rhyse Martin with a clever kick in the 16-14 defeat.

“I was really nervous,” Sinfield told Sky Sports afterwards. “Obviously, I didn’t know I’d be playing against a full team of men.

“I know I’ve played a bit of reserves, but that’s only half a team [of men], really. I was really nervous, but as soon as I started, I felt all right.

“I thought I built into the game, the lads were great and looked after me, and made sure I was all right, so I can’t thank them enough really.”

Jack Sinfield put through a lovely grubber kick which led to Rhyse Martin scoring for Leeds Rhinos against Castleford Tigers.

Jack Sinfield put through a lovely grubber kick which led to Rhyse Martin scoring for Leeds Rhinos against Castleford Tigers.

He came into the team on Monday fresh from kicking the winning drop goal in the U18s’ 23-22 win over Wigan Warriors on Thursday and wore the same No 32 shirt his father wore on his own Leeds debut as a 16-year-old against Sheffield Eagles in 1997.

Aidan Sezer’s absence and Blake Austin failing a head injury assessment against Castleford, therefore ruling him out of Friday’s match at home to Toulouse Olympique, mean Sinfield could get an extended run in the team.

But for however much longer this early experience of first-team rugby lasts, the teenager is just aiming to keep improving with every game.

“I’m really enjoying it,” Sinfield said. “I’m loving my rugby at the moment, so hopefully that carries on.

I’m loving my rugby at the moment, so hopefully that carries on.

“Hopefully I’ll just keep learning and growing, and then hopefully I can bring a bit of stability in the halves, making sure we finish our sets in the right places, and completing our sets, really.”

Interim head coach Jamie Jones-Buchanan predicted a bright future for the son of his former Rhinos team-mate after handing him his first Super League appearance.

Sinfield Snr, a seven-time Super League Grand Final winner, was among the 9,372 crowd at the Mend-A-Hose Jungle to watch his son create both a try and a fine impression despite being on the losing side.

Interim head coach Jones-Buchanan, who is expected to make way for a new head coach by the end of the week, gave a chance to the youngster in the absence of six injured backs and was delighted with what he saw.

“Whilst he’s not somebody you want to be playing every week because of his age, he’s definitely ready to dip his toes in the deep end,” Jones-Buchanan said.

“I thought he was exceptional for 80 minutes. He played a big part in that first-half try and came up with some real nice moments.

“His game will get perfected in seasons to come and, God willing, much like his dad, he will lift lots of trophies.”