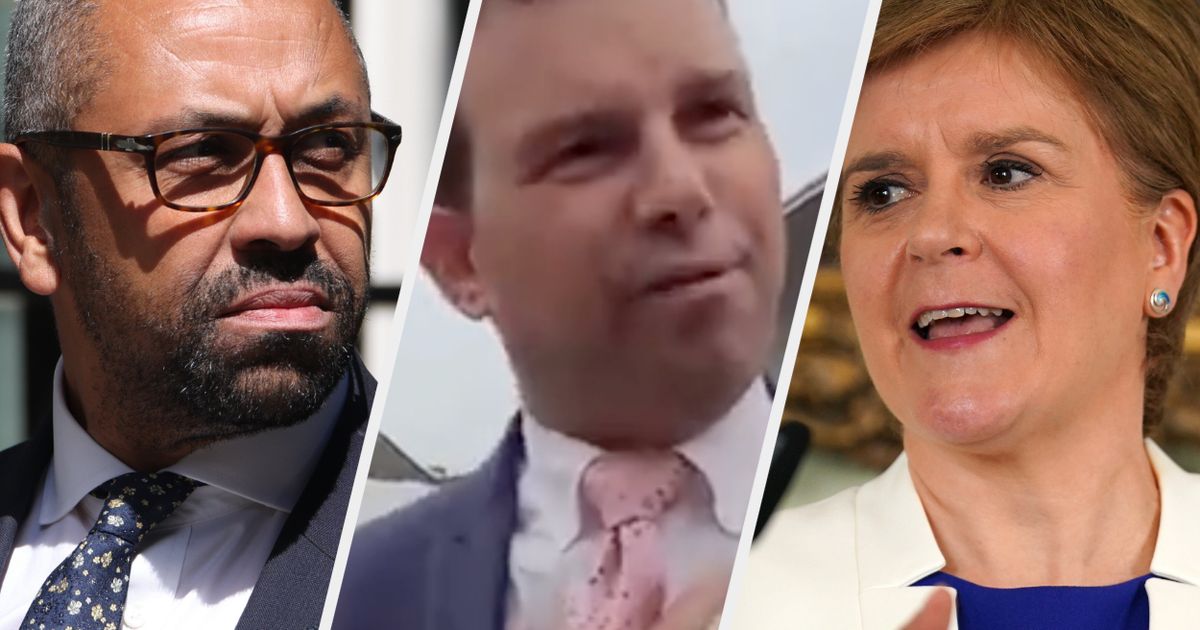 Education secretary James Cleverly has just picked a fight with Nicola Sturgeon over how she responded to the abuse of a BBC journalist in Scotland.

Sturgeon, first minister of Scotland and prominent critic of the Conservative Party, showed her support for BBC’s Scotland editor James Cook after nationalists criticised him while he was reporting.

But Cleverly suggested that Sturgeon had been tacitly saying that abusing other people at the hustings (such as politicians or Tory Party members) was acceptable.

Here’s a breakdown of what happened.

What happened to James Cook?

Cook was filmed as he was verbally abused in Perth, Scotland, where the Tory hustings were being held on Tuesday, and called a “liar”, a “traitor” and “scum” by people who were off camera.

The video was posted online by someone involved in the demonstration before being deleted. It was re-uploaded by another account later.

Cook can be heard pushing back against the protesters, insisting that he was trying to film the whole crowd at the hustings when someone called him “scum”.

One person asked: “How long have you been in Scotland?”

Just before the clip ends, another voice can be heard saying: “BBC do not do fair reporting!”

The BBC has been repeatedly accused being bias against the pro-independence movement since the 2014 independence vote, although the broadcaster has repeatedly denied such a claim.

This is absolutely horrible.

It’s remarkable how calm and polite the ever-professional James Cook is, even when a man shouts “scum” and “traitor” at him when he’s trying to do his job.

Many people quickly showed their support for Cook’s professionalism on Twitter.

What did Nicola Sturgeon say?

Sturgeon spoke up in favour of Cook the following morning, tweeting that Cook was a “total pro” and that it is unacceptable to abuse journalists.

She wrote: “Their job is vital to our democracy and it is important to report and scrutinise, not support any viewpoint.

“James Cook is a journalist of the highest quality and a total pro – the behaviour he was subjected to last night was disgraceful.”

Hurling abuse at journalists is never acceptable. Their job is vital to our democracy & it is to report & scrutinise, not support any viewpoint. @BBCJamesCook is a journalist of the highest quality and a total pro – the behaviour he was subjected to last night was disgraceful

What did James Cleverly say?

Suggesting that it was not just journalists who were criticised at the event, the education secretary tweeted: “This selective condemnation demonstrates a huge failure of leadership by Sturgeon.

“BBCJamesCook was not the only person to be abused. Implying that some people are legitimate targets for abuse is deeply wrong and very dangerous.”

This selective condemnation demonstrates a huge failure of leadership by Sturgeon.@BBCJamesCook was not the only person to be abused. Implying that some people are legitimate targets for abuse is deeply wrong and very dangerous. https://t.co/7Ff6frs3Lr

The BBC has claimed that the Tory members who arrived at the hustings to see leadership candidates, Liz Truss and Rishi Sunak, faced verbal abuse.

Protesters also had banners which criticised the Conservative government, or read the slogan “Scottish Not British”.

Police Scotland say there have been no arrest at the protests.

Why do some nationalists dislike the BBC?

Cook’s predecessor, Sarah Smith, has previously explained how she faced intense backlash as the BBC’s Scotland editor, saying she was “demonised quite heavily amongst certain parts of the population”.

In defence of Cook, the BBC, said he was an “exceptional correspondent” who “showed professionalism throughout the incident”, adding that abuse towards journalists while they’re working is never acceptable.

It’s not just the BBC who faced backlash at the event. Scotsman journalist Alistair Grant tweeted that he was even hit by an egg when he arrived at the hustings.

Can 100% confirm that when I arrived at the Tory leadership hustings, eggs were being thrown towards the queue of party members waiting to get in to the venue. https://t.co/JsoWobtxhJ