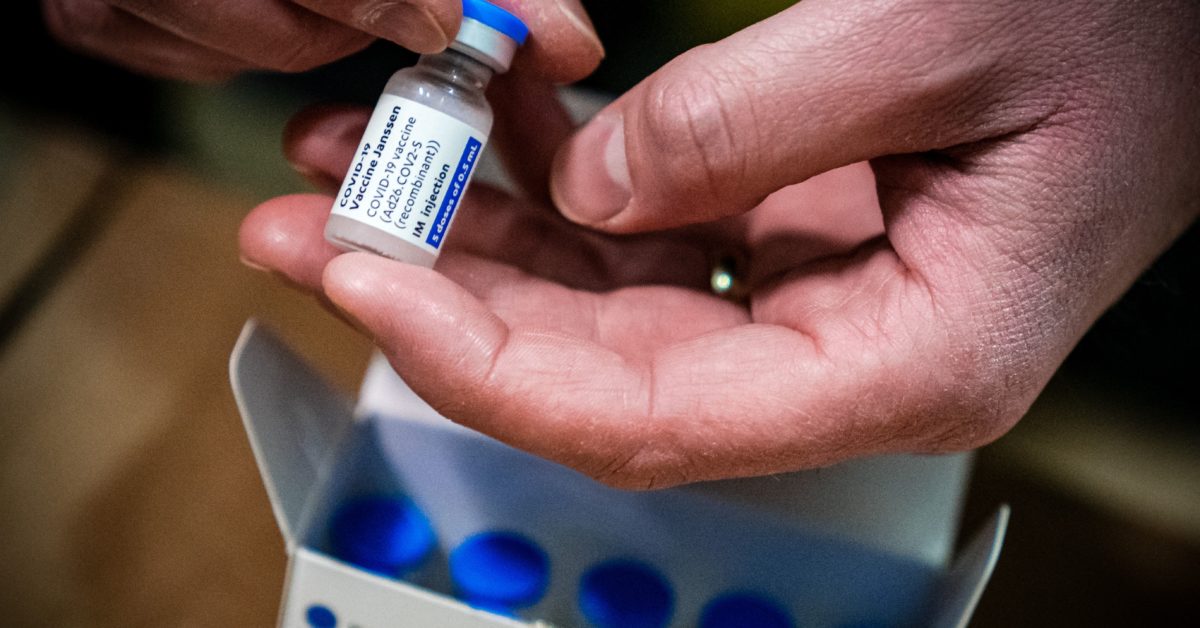 The U.S. on Tuesday recommended suspending the vaccine after six reports of blood clots. Shortly after, the American company announced it would â€œproactively delayâ€ its European rollout.Â

The first deliveries of the one-dose adenovirus vaccine set to arrive in the EU this week were initially cheered asÂ the antidote to the blocâ€™s slow vaccination campaigns. But now the shot is looking more like the Oxford/AstraZeneca jab, which has been plagued by delivery delays and safety concerns in the EU.

â€œIt is a setback, but better to be safe than sorry,â€ one EU official said. But an EU diplomat said the announcement was not â€œgood news.”

“We saw what happened with AstraZeneca,” he added.

It’s not yet clear whether the countries that already have their first boxes of J&J vaccines will use them despite the company’s warning. But the announcement Tuesday caused fear that capitals will again take different approaches, just as they have done with the Oxford/AstraZeneca jab. In that case, the patchwork of national responses on age cut-offs has prompted the Commission and the Portuguese presidency of the Council to push for a more harmonized approach on who should get the vaccine.

Alessio D’amato, health counselor in the Italian region of Lazio, said that a â€œquick, clear, definitive decision, without hesitation and uncertainty” is needed on the J&J vaccine. “We must avoid doing what has been done with the AstraZeneca vaccine,â€ he said, as quoted in la Repubblica. “The authorities should speak with one voice.â€

So far, most countries â€” even those that exercised extreme caution over the Oxford/AstraZeneca jab â€” have indicated they will still go forward with the J&J vaccine. Belgium, for example, has 36,000 doses and plans to use them unless the European Medicines Agency says otherwise. Portugal also said it was too early to pause the vaccine.

Other countries, like Spain, that were not set to receive their first doses of the vaccine until Wednesday have yet to announce their decision.

One factor affecting countries’ decisions, said the EU diplomat, is how much they ordered of each jab. The EU is set to receive by the end of June 55 million J&J doses, which were offered to each country based on their population size. But some countries ordered less of the pricey mRNA vaccines and more of the cheaper viral vector jabs like Oxford/AstraZeneca and J&J.

One price list published by accident in December showed EU countries spent $8.50 for those shots, compared to mRNA shots, which initially cost EU countries up to $18 a piece.

What we know so far

European regulators have yet to recommend against using the J&J vaccine. But all eyes are now on the safety report that the EMA launched on Friday to investigate cases of blood clots linked to vaccination.Â

â€œIt is currently not clear whether there is a causal association between vaccination with COVID-19 Vaccine Janssen and these conditions,â€ the EMA wrote in a statement. It added that its safety committee, PRAC, â€œis investigating these cases and will decide whether regulatory action may be necessary.â€

The EMA didn’t say how long it would take to make an assessment. But in a tweet, Health Commissioner Stella Kyriakides called on the regulator to keep an “open line” with its U.S. counterparts, on the grounds that â€œvaccine safety is always paramount.â€Â

The U.K., meanwhile, is still expecting its regulator to approve the vaccine imminently, according to British media.

The pause may not last long in the U.S, with the acting Food and Drug Administration Commissioner Janet Woodcock saying Tuesday that the delay could be for “a matter of days.”

Anthony Fauci, President Joe Bidenâ€™s chief medical adviser, said Tuesday said it could be weeks, although â€œitâ€™s going to be more like days to weeks, rather than weeks to months.” Behind closed doors, the Biden administration is preparing for a potentially lengthy suspension.

The recommendation from American regulators was based on six cases of blood clots combined with low platelets all in women between the ages of 18 and 48. That amounts to a tiny fraction of the 6.8 million vaccinations given in total in the U.S.Â

“Itâ€™s plainly obvious to us already that what weâ€™re seeing with the [J&J] vaccine looks very similar to what was being seen with the AstraZeneca vaccine,” said FDA’s top vaccine regulator, Peter Marks. That vaccine is only being used in older populations in numerous EU countries.Â

The U.S. government said the pause wonâ€™t have a massive impact on vaccinations in the country, as the vaccine â€œmakes up less than 5 percent of the recorded shots in arms in the United States to date,â€ White House COVID-19 response coordinator Jeff Zients said in a statement.

But unlike the U.S., the EU is banking on these vaccines to provide a much-needed boost to the blocâ€™s vaccination campaigns. “It only takes one vaccination to achieve sufficient protection, so the vaccine will massively accelerate the pace in the EU,â€ German MEP Peter Liese wrote in a statement Monday after the company began shipments to EU countries and before Tuesday’s announcement.Â

Still, the bulk of the EUâ€™s doses in the second quarter will come from BioNTech/Pfizer, which is expected to provide 200 million shots. Moderna should deliver another 35 million. Meanwhile, AstraZeneca looks likely to only provide 70 million doses of the 180 million it originally planned to provide the EU in the second quarter, according to a second EU diplomat.Â That comes on top of a massive shortfall of around 70 million doses in the first quarter.

Still, if everything runs as planned, Liese wrote in that Monday statement, the Commissionâ€™s goal of vaccinating 70 percent of adults by the end of the summer â€œcan be achieved as early as mid-July, and if things go well, every European citizen can already be offered vaccination by mid-summer.”

The first EU diplomat said that things could work out for the EU despite the news. As long as the EU gets its 55 million J&J doses this quarter, a short-term pause might not be that bad, he said.

Initial deliveries of the J&J vaccine were already quite small initially, he noted, adding that the bulk of doses are expected starting in May.Â But if the pause continues longer than days or weeks, he warned, itâ€™s â€œpotentially a huge blow.â€