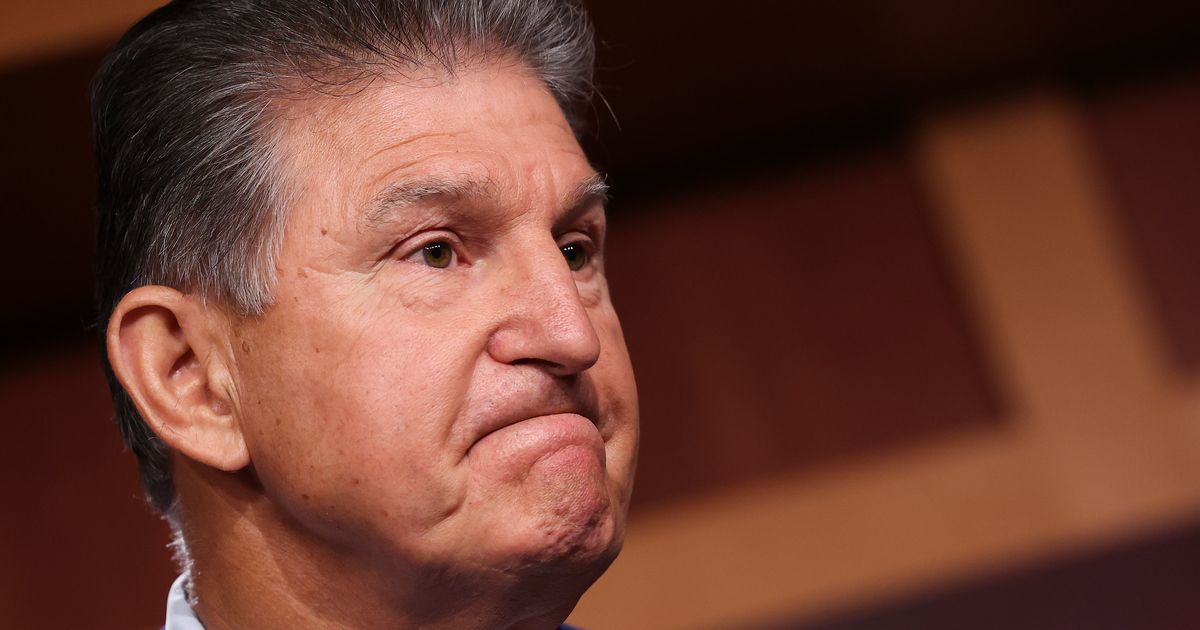 WASHINGTON ― Democrats dropped Sen. Joe Manchin’s proposed energy plan from a must-pass government funding bill on Tuesday after it became clear it lacked the necessary bipartisan support to advance in the Senate.

Many Republicans are still angry at Manchin for helping Democrats pass their big climate and health law over the summer. They took revenge on the West Virginia moderate by refusing to support his pipeline proposal.

Manchin reacted to broad GOP opposition with dismay, saying it is “unfortunate that members of the United States Senate are allowing politics to put the energy security of our nation at risk.”

The bill, titled the Energy and Security Independence Act, would speed the federal permitting and approval process of fossil fuel and energy infrastructure projects, including a proposed pipeline in his home state. Manchin argued that faster permitting of such projects would help lower energy prices amid global turmoil in Europe and the Middle East.

“This is a chance in a lifetime to have energy independence, for us to have security and making sure we can take care of the American people with lower energy prices,” Manchin said Sunday in an interview on Fox News.

Democratic leaders initially agreed to advance the measure after Manchin signed off on the Inflation Reduction Act in early August. The “side deal” agreed to by President Joe Biden and Senate Majority Leader Chuck Schumer (D-N.Y.) was ultimately attached to a spending bill that would fund the government until Dec. 16.

Republicans, even those who agreed with Manchin on the need for federal permitting reform of energy projects, balked at the permitting provisions.

Senate Minority Mitch McConnell (R-Ky.) openly mocked Manchin, saying on Tuesday that “it is hard to imagine a worse bargain for a senator” if all he got in exchange for his vote for the Inflation Reduction Act was a promise from Democrats that ultimately didn’t end in the passage of permitting reform.

Sen. Roger Marshall (R-Kan.), in an interview on Fox Business News, derided the bill as the “Mountaineer kickback” and argued it would benefit West Virginia over the rest of the country.

“If Senator Manchin and his Democrat colleagues want to get to yes, it requires input from everyone, not a backroom take-it-or-leave-it proposal,” added Sen. Kevin Cramer (R-N.D.) in a statement.

Democrats and key progressives also criticized the legislation, warning that it would degrade environmental laws and harm communities on the frontlines of climate change.

“At a time when climate change is threatening the very existence of our planet, why would anybody be talking about substantially increasing carbon emissions and expanding fossil fuel production in the United States?” Sen. Bernie Sanders (I-Vt.) asked in a speech on the Senate floor earlier this month.

Sen. Tim Kaine (D-Va.), meanwhile, ripped provisions in the bill requiring construction of the Mountain Valley Pipeline, whose approval has faced legal challenges. The proposed path of the pipeline would run through parts of Virginia.

“The pipeline runs through Virginia for 100 miles and takes property from landowners, but I was not consulted as a deal was struck to approve it and thus not given an opportunity to share my constituents’ deep concerns,” Kaine said in a statement Tuesday.

“Allowing them to fundamentally change federal law to achieve their goal would surely encourage other wealthy people and companies to try the same. I won’t participate in opening that door to abuse and even corruption,” he added.

The tabling of Manchin’s permitting proposal clears the way for the passage of legislation funding the government ahead of this week’s Sept. 30 deadline.

The bill also includes $12 billion in military aid for Ukraine, financial support for Afghanistan refugees and monetary assistance for victims of the Jackson, Mississippi, water crisis.