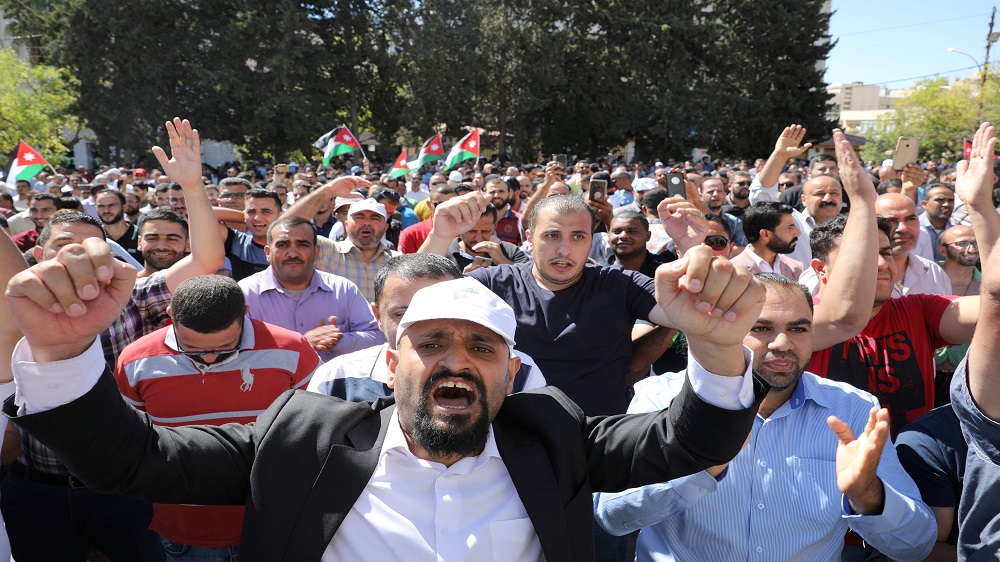 Jordanian security forces arrested leading members of the opposition-run teachers union on Saturday, raided its offices and shut it down for two years, escalating a confrontation with a group that has become a leading source of dissent.

Riot police reinforcements were deployed on Saturday near the seat of government in the capital, Amman, and other areas where teacher activists were planning protests. Security forces raided the union’s headquarters in the city of Karak.

Translation: The issue is not about the teachers’ syndicate, but about the government’s attempt to silence outspoken voices and crush everyone who stands before it

The teachers’ union responded by calling for a demonstration on Wednesday, during which Nawasra urged authorities to respect their promises.

According to the official Petra news agency, Amman’s Prosecutor-General Hassan Abdallat summoned 13 members of the union’s council for questioning on “criminal and corruption charges”.

Petra did not elaborate on the nature of the alleged “crimes” but quoted Abdallat as saying they included “financial violations”.

The prosecutor also issued a gag order on investigations into the case, the agency said.Â

Translation:Â The arrest of union members is a stain on the government

Political opposition is often marginalised in Jordan, but protests have grown in recent years over eroding living standards, corruption and the slow pace of political reforms.

Saturday’s crackdown on the union would “only further aggravate political tensions by the government at a time people are choked under hard economic conditions”, said Murad Adailah, head of the Islamic Action Front, the largest opposition party.

The 100,000-strong union went on strike last year, shutting down schools across Jordan for a month in one of the longest and most disruptive public sector strikes in the country’s history. In recent weeks, its leadership has accused the government of failing to honour a deal signed last October that ended the strike.

The agreement included a 50 percent pay rise this year, which the government now says is unaffordable because of the economic blow from the coronavirus crisis.

Translation: I am with the teachers’ union…the government did not like the fact the union had lots of popularity and was afraid its shortcomings would be exposed. The union represents the Jordanian society, which is why the government wants to silence the voice of the people.

Some officials have also accused union leaders of harbouring the opposition’s political agenda. The union said this accusation is part of a government smear campaign.

Opposition politicians say the government has been using draconian emergency laws enacted last March at the start of the coronavirus lockdown to limit civil and political rights. Activists have been arrested in recent weeks over comments on social media.

Jordan is highly dependent on foreign aid and has struggled to curb its public debt, which stands at more than $40bn, while unemployment in the first quarter of 2020 hit 19.3 percent.