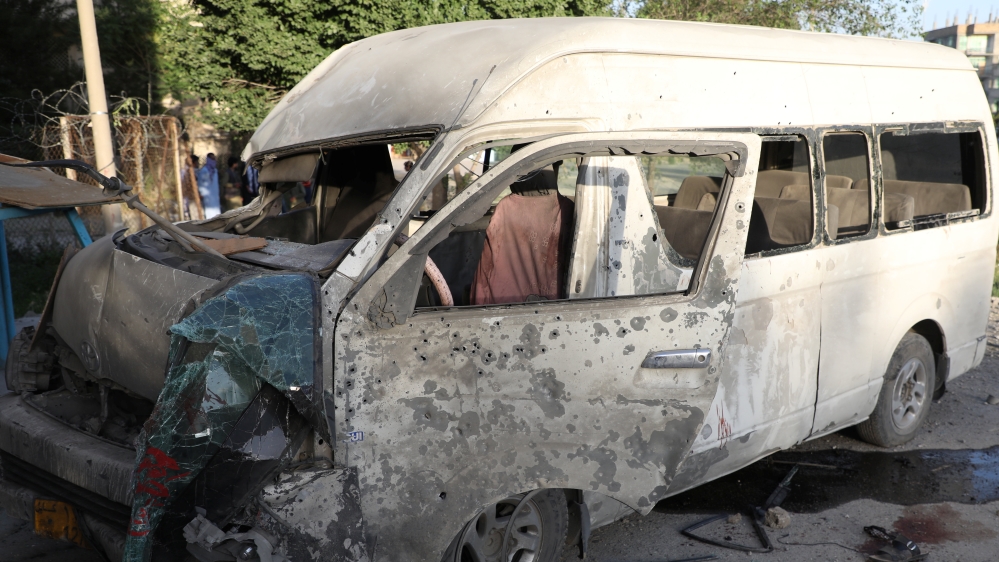 A journalist and a driver were killed when a private bus carrying employees of an Afghan television station was hit by a roadside bomb in the capital, Kabul, the network’s news director and officials have said.

The interior ministry said the minivan had been targeted.

“The target of the blast was the vehicle of Khurshid private TV,” a ministry statement said.

The Islamic State of Iraq and the Levant (ISIL, ISIS) group claimed responsibility hours after the attack.Â

ISIL, which battles government forces and Taliban fighters, has claimed some of the deadliest attacks in urban Afghanistan in recent years. It did not give a reason for Saturday’s blast.

Pictures shared on social media showed a white minibus with extensive damage to its front.

It was the second such attack targeting employees of the channel in less than a year.

In August 2019, two passers-by were killed when a “sticky bomb” – a type of homemade explosive attached to vehicles with magnets – struck a similar Khurshid TV van.

No group claimed responsibility for that attack, which wounded three employees.

Afghanistan is one of the world’s deadliest places for journalists, who face many risks covering the country’s long conflict and who have sometimes been targeted for doing their job.

Last year the Taliban warned the Afghan media to stop broadcasting what it called “anti-Taliban statements”.

The Taliban claimed Tolo was producing propaganda for the US military and western-backed Afghan government.

The latest attack comes during an overall drop in violence across much of Afghanistan since the Taliban offered a surprise three-day ceasefire on May 24.

While the truce ended on Tuesday night, violence has largely remained low, though Afghan security forces have suffered some attacks that authorities blame on the Taliban.