Jr NTR or Ram Charan? SS Rajamouli walks the tightrope over who stole the show in RRR 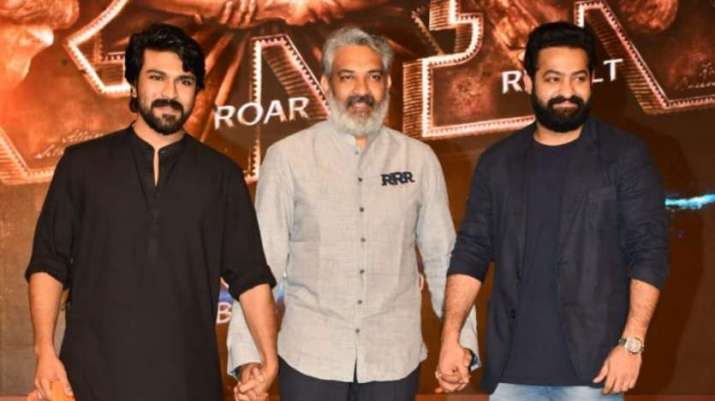 SS Rajamouli directorial RRR has become one of the biggest blockbusters of this year and the reason is believed to be its star cast– Ram Charan, Jr. NTR, Alia Bhatt, Ajay Devgn and the storytelling. After the film’s release, Jr NTR was questioned about Charan walking away with all the accolades and it was claimed that the latter got more screen time in RRR. The director has now reacted to the screentime debate among the fans.

When asked about Ram Charan stealing the show in ‘RRR,’ the filmmaker stated that the duo justified their respective roles equally. “It breaks my heart to think of crediting one of them for the movie’s success,” Rajamouli said.

“People believe this is because Jr NTR is already well-known for his acting abilities, and Ram Charan’s appearance in ‘RRR’ came as a surprise element. But, as a filmmaker, I know how much effort both of them have put into the subject. In fact, I cannot imagine any other Indian actor in Bheem’s role, because it has a multilayered idiosyncrasy, which NTR alone is capable of carrying,” the ‘Simhadri’ director stated. ALSO READ: Ram Charan shoots down claims of overshadowing Jr. NTR in RRR: ‘Not even for a second’

Earlier during the ‘RRR’ Hindi success meet, NTR was asked to comment on Ram Charan stealing the show but the latter quickly stepped in and heaped praise on NTR. He said, “No ma’am, I don’t believe that at all. Not even for a second. We both have excelled beautifully and Tarak was fantastic. I don’t think I’ve enjoyed working in a film as much as RRR. What I take back from RRR is my journey with Bheem, my journey with Tarak. I shall never ever forget. Thank you Rajamouli garu for giving me that opportunity. I’ll love him (Tarak) to bits, and it’ll always remain the same.” Ram Charan arrives barefoot at RRR’s success party. Know why

Talking about RRR, set in pre-independence India, the film is a fictional take on the younger days of celebrated freedom fighters, Komaram Bheem and Alluri Seetharama Raju. While Jr NTR essayed the role of Komaram Bheem, Charan played Alluri Sitarama Raju. Their friendship and bromance was the highlight of the film.