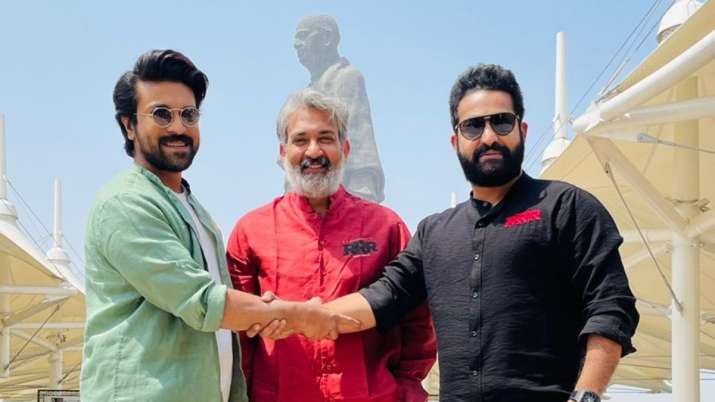 After Bengaluru, Hyderabad and Dubai, the pan-India cast of ‘RRR’ including director S.S. Rajamouli, and actors Junior NTR and Ram Charan visited Sardar Vallabhbhai Patel Statue of Unity in Baroda. ‘RRR’ becomes the first film to visit this monument of India. The makers and the cast shared their latest pictures from the Baroda visit, much to the surprise of their fans, thus building the anticipation even further.

From Hyderabad, Bengaluru, Baroda, Delhi, Amritsar, Jaipur, Kolkata, Varanasi to Dubai, the makers have chalked out an extensive promotional plan wherein they will be visiting the major potential markets of the country for the film promotions from March 18-22.

Rajamouli’s ‘RRR’ is the first Indian film to be released in Dolby Cinema.

The film includes a star-studded lineup besides lead actors Ram Charan and Jr. NTR, Ajay Devgn, Alia Bhatt and Olivia Morris will be seen in pivotal roles while Samuthirakani, Ray Stevenson, and Alison Doody join in as supporting roles. Set in pre-independence India, ‘RRR’ is a fictional take on the younger days of celebrated freedom fighters, Komaram Bheem and Alluri Seetharama Raju, portrayed by Jr. NTR and Ram Charan.

‘RRR’ was originally planned as a July 30, 2020 release. However, the unforeseen delays, including those caused by injuries suffered by Jr NTR and Ram during production, forced the makers to push the release date. The makers then pushed the release date to October 13, 2021, but due to the theatres not being fully functional, the makers postponed that date too.

Jayanti Lal Gada of PEN Studios has bagged the theatrical distribution rights across North India and has also bought worldwide electronic rights for all languages. Pen Marudhar will be distributing the film in the North Territory.

The Telugu-language period action drama film is produced by D.V.V. Danayya of DVV Entertainments. RRR will release on March 25.