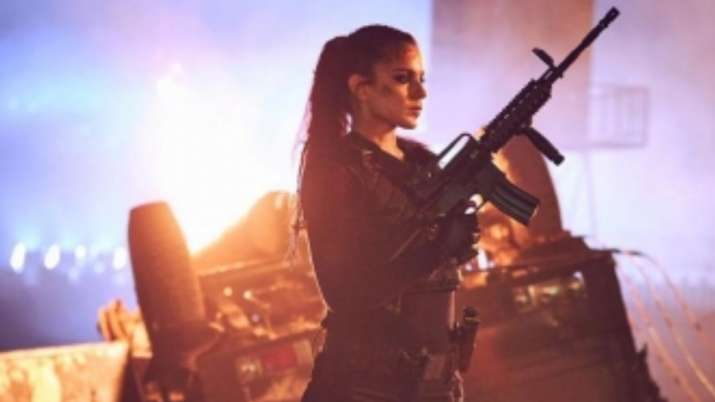 Actress Kangana Ranaut on Wednesday treated her fans to an action-packed avatar of hers from upcoming film Dhakad. Sharing a new poster of the film, the actress said she looks forward to starting work on the film. In the picture she shared, Kangana is seen striking a powerful pose as a toppled burning car is visible in the backdrop. The actress is armed with a machine gun and a pistol.

“Can’t wait to start filming #Dhaakad,” she wrote on the image, which she shared on her Instagram Story. Take a look:

“Dhaakad” is billed as a spy thriller that casts Kangana as Agent Agni. Arjun Rampal plays the antagonist Rudraveer. The Razneesh Razy Ghai directorial is slated to release on October 1.

Meanwhile, the actress on Monday filed an application saying she needed to travel to Budapest this month for the shooting of her upcoming film ‘Dhakkad’ and thus, needed her passport renewed. In her interim application filed through advocate Rizwan Siddiquee, Ranaut said the Passport Authority had refused to renew her passport on account of an FIR registered against her and her sister Rangoli Chandel by the Bandra police earlier this year over some comments they had allegedly made on Twitter in October last year, which the FIR claimed promoted enmity between communities.

The Bombay High Court on Tuesday adjourned to June 25 the hearing on an application filed by actor Kangana Ranaut who stated that the Passport Authority had refused to renew her passport citing an FIR registered against her by the Mumbai Police.

A bench of Justices PB Varale and SP Tavade adjourned the hearing after noting that Ranaut had failed to implead the Passport Authority as a party in the case. The bench also said that Ranaut’s application was “vague” and did not place all relevant facts on record.

— with input from agencies