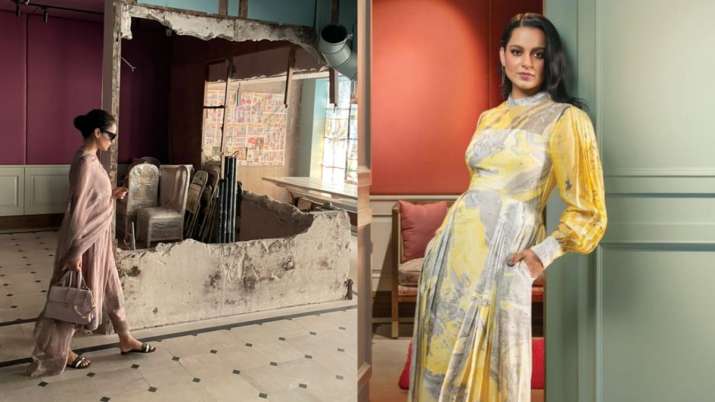 ollywood Actres Kangana Ranaut on Monday visited her demolished Mumbai office. The actress shared pictures from her office which was partially broken by the Brihanmumbai Municipal Corporation last year. On September 9, the BMC demolished a part of Ranaut’s bungalow, alleging she had made illegal structural changes and repairs to the structure breaching the civic body’s sanction plan. Kangana had sought â‚¹2 crore in damages from the BMC and urged the court to declare BMCâ€™s action illegal.

Now, the heart broken actress took to her social media and wrote “I have been conducting meetings at my house, today Aksht Ranaut who founded Manikarnika Films with me also single handedly handling all 700 cases filed on me, insisted that today I attend important meeting regarding Emergency at the office,I wasnâ€™t ready and my heart broke again.”Â

Kangana also shared a few pictures of herself at the office which is half-broken. She also posted a picture which shows her standing by the wall in her then newly constructed office.Â

For the unversed, Kangana’s production house in Bandra, Mumbai is called Manikarnika Films. Her office was demolished by BMC officials on the claims that the construction was built on illegal property.Â

The ‘Queen’ actress had taken to Twitter to share her outrage over the news. “Today they have demolished my house tomorrow it will be yours, governments come and go when you normalise violent suppression of a voice it becomes the norm, today one person being burned at the stake tomorrow it will be jowhar of thousands,wake up now.”

On the professional front, Kangana is gearing up for the release of her upcoming film ‘Dhaakad’, which is billed as a spy thriller. The film casts Kangana as Agent Agni. Arjun Rampal plays the antagonist Rudraveer. The Razneesh Razy Ghai directorial is slated to release on October 1.

Apart from ‘Dhaakad’, the actress will also feature in forthcoming films ‘Thalaivi’ and ‘Tejas’. Thalaivi is a biopic on actor-turned-politician Jayalalithaa. Apart from this she also has ‘Manikarnika Returns: The Legend Of Didda’ in the pipeline.