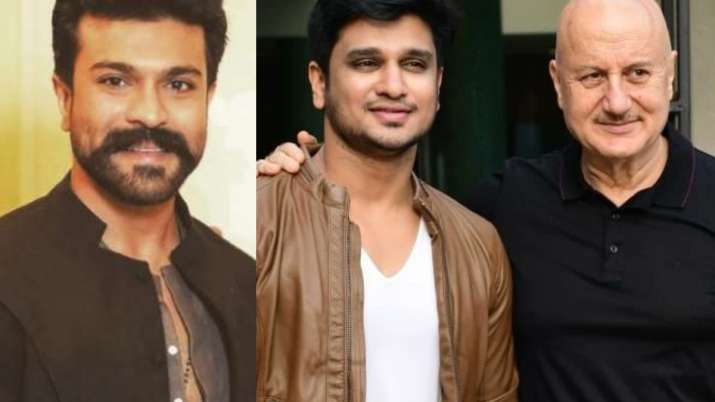 Karthikeya 2: Nikhil Siddhartha’s mythological drama has turned out to be a pan-India blockbuster. The film is garnering both numbers and acclaim. Recently, Karthikeya 2 has crossed the milestone of Rs 100 crores, globally. As it continues to rule the box office, Ram Charan congratulated the team and stated that a good film like Karthikeya 2 always brings back glory to theatres.

The RRR actor showered love and praise on Anupam Kher, Nikhil Siddhartha and the entire team of Karthikeya 2. Taking to his Twitter, he wrote, “Good films always bring back glory to theatres! Congratulations to the entire team on the massive success of #karthikeya2 @AnupamPkher @actor_Nikhil @anupamahere @chandoomondeti @AAArtsOfficial @AbhishekOfficl @peoplemediafcy (sic).”

Soon after Charan’s tweet, Karthikeya 2 leading star Nikhil retweeted the post and thanked him. He wrote “Charan Bhai (folded hands emoji) coming from you the entire team of #Karthikeya2 is overjoyed (hearts emoji) and so am I (folding hands, smiling face emojis)  Ur wishes mean a lot to us (fire emoji) #RRR #AlluriSeetharamaraju #Karthikeya2Hindi.”

Anupam Kher, who has made a special cameo in Karthikeya 2, too thanked Ram Charan and said that he ‘admires the latter’s work’. “I totally agree with you my friend. Thank you dear @AlwaysRamCharan for your warm wishes. I admire your work! Jai Ho!” Kher wrote.

Nikhil Siddhartha starrer continues to dominate the box office both, domestically and internationally. Karthikeya 2 has crossed the 100-crore mark at the box office, worldwide. Recently, Nikhil and the entire team of Karthikeya 2 went to the Kurnool exhibition ground to celebrate the global box office success.

Written and directed by Chandoo Mondeti, Karthikeya 2 was released on a Saturday (August 13) and benefited from the long independence day week. It is a sequel to Mondeti’s 2014 film Karthikeya. The film, featuring actor Nikhil Siddhartha and Anupama Parameswaran in the lead, is a mystery thriller about a search for secrets buried beneath the sea near Dwaraka. Nikhil, Anupama, and actor Srinivas Reddy are on a mission to uncover a mystery, with their journey taking them across the soaring sea. The film also stars Anupam Kher.

It was originally scheduled to be released on July 22. However, the release of the film was postponed and eventually, it hit theaters on August 13 to rave reviews from the critics and the audience.