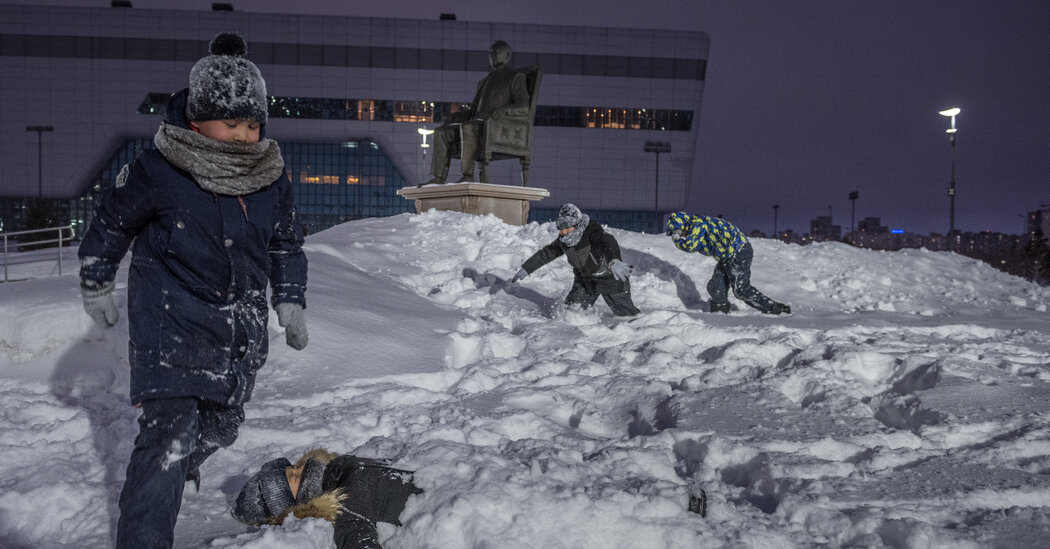 NUR-SULTAN, Kazakhstan â€” For three decades, Nursultan Nazarbayev was seemingly everywhere in Kazakhstan, the country he ruled with an autocratâ€™s clenched fist. The capitalâ€™s airport was named after him, as were the cityâ€™s best university, a group of elite high schools throughout the country, well-endowed foundations and wide boulevards.

Mr. Nazarbayev designed a futuristic white steel tower in the center of the city, with a gold orb on top. Inside, visitors can place their hands in a giant gold relief of Mr. Nazarbayevâ€™s own hand, his fingers pointing out the plate-glass windows to his presidential palace in the distance. He stepped down as president in 2019 after 28 years, but retained power and influence as the official â€œLeader of the Nation.â€ His rubber-stamp Parliament renamed the capital city in his honor.

It was an open secret that he was the one still calling the shots.

Now, the man who was everywhere, and who controlled everything, has all but vanished after violent protests this month that spread like wildfire and marked the countryâ€™s greatest political upheaval since it became independent after the collapse of the Soviet Union.

Political power now rests with Mr. Nazarbayevâ€™s handpicked successor, Kassym-Jomart Tokayev, who stripped his longtime boss and mentor of his title and his last remaining footholds of power. Except for making a brief video statement, the former leader has receded, the speed of his fall from power almost as stunning as the length of his reign.

In the days after the protests, Kazakhstan was closed to many outsiders. A visit to Nur-Sultan soon after it reopened revealed that life in the bureaucratic city, populated by many civil servants, had mostly returned to normal. On a recent weekend, shoppers braving the risks of the coronavirus perused the Khan Shatyr mall, designed by the British architect Norman Foster in the shape of a large tent, with visitors searching for post-holiday sales.

The calm stood in contrast to the nationâ€™s largest city, Almaty, where violence and looting and brutal police crackdowns have traumatized residents, some of whom are still searching for relatives who disappeared. Almatyâ€™s monumental City Hall was vandalized during the unrest and burned for three days, leaving a gutted, blackened shell.

Kazakhstan, a former Soviet republic with a population of 19 million, faces an uncertain future. Mr. Nazarbayev had maintained a fragile independence from Vladimir V. Putinâ€™s Russia, but Mr. Tokayev was forced to call for Russian-led military support to help quell the violence this month, raising the question of whether he is beholden to the Russian leader for helping to assure his political survival. As Mr. Putin squares off against the West in a standoff over Ukraine, the Russian president has made clear his intention to maintain influence over neighboring countries.

Internally, Mr. Tokayev has promised overhauls to address the countryâ€™s ballooning inequality â€” the reason that spawned the protests in the first place.

Leysan Zoripova, 50, who was visiting her daughter in Nur-Sultan, said, â€œWe are of course waiting for better days, when products are available and essential things like groceries were not so expensive.â€

With Mr. Nazarbayevâ€™s legacy so pervasive, the question is whether anything will truly change in a country rich in resources, but where autocratic rule had allowed Mr. Nazarbayevâ€™s family and friends to reap great wealth and keep it concentrated in the hands of a few.

â€œThe formal and informal construction of the regime remains the same,â€ said Dimash Alzhanov, one of the founding members of Wake Up, Kazakhstan, an opposition movement whose activists have been regularly harassed and detained. â€œThe relations between elites â€” the way they construct patron-client relations â€” remains the same.â€

Mr. Nazarbayev grew up in a rural town near Almaty, the former capital. He was a steelworker before joining the Communist Party, rising through the ranks to regional party secretary. In 1984, he became prime minister of the Soviet Socialist Republic of Kazakhstan.

Mr. Nazarbayev became the first president of Kazakhstan in 1990, and the next year, just weeks before the collapse of Soviet Union, Kazakhstan declared its independence. It was the only newly independent former Soviet state where its titular people â€” Kazakhs â€” were not the ethnic majority. Forty percent of the population were ethnic Russian, a number that has since dropped to 19 percent.

At the time, President Boris N. Yeltsin of Russia was speaking openly about wanting to expand his countryâ€™s borders to include Abkhazia, a region of Georgia that Russia eventually invaded in 2008; and Crimea, the Ukrainian peninsula that Russia annexed in 2014. He also coveted Donbas, the eastern part of Ukraine where Russian-backed separatists have been fighting since the annexation.

Northern Kazakhstan was the fourth region in Mr. Yeltsinâ€™s sights, but Russian forces never showed up uninvited, and today it is the only region of the four that is not contested.

In part, thatâ€™s because even his toughest critics acknowledge that Mr. Nazarbayev handled thorny relations with Moscow in a savvy manner. When he moved the capital from Almaty to a windy, grassland site in the north (the new capital was previously called Astana), it was not a pure vanity project; he was effectively planting a flag.

He championed a â€œmultivectorâ€ foreign policy, balancing between his powerful neighbors Russia and China while also courting U.S. investment, especially in the oil-rich west. His mantra for development was, â€œEconomics first, politics later.â€

But over 28 years, Mr. Nazarbayevâ€™s reign came to look more like kleptocracy. His family enjoyed vast riches, with influence in the banking and extraction industries and real estate in Switzerland, London and New York.

A recent report by the think tank Chatham House listed 34 properties bought by members of the countryâ€™s ruling elite from 1998 to 2020 at a total cost of about $733 million. Most of the purchases were made by members of the Nazarbayev family or people close to them, according to John Heathershaw, one of the reportâ€™s authors.

Mr. Nazarbayevâ€™s middle daughter, Dinara, and her husband, Timur Kulibayev, were each worth $3 billion before the recent unrest in Kazakhstan, according to Forbes, and they own the countryâ€™s biggest bank. His eldest daughter, Dariga Nazarbayeva, an amateur opera singer and politician, and her son own real estate in London worth almost $200 million. Their properties are said to include the house at 221B Baker Street that is the address of the fictional detective Sherlock Holmes.

Mr. Nazarbayevâ€™s youngest daughter, Aliya, had a monopoly on the recycling industry through a private company called Operator ROP, which has taken in about $1.6 billion since 2016, according to remarks by Serikkali Brekeshev, a Kazakh minister, in a government meeting this month.

What led to the protests? The protests began when the government lifted price caps for liquefied petroleum gas, a low-carbon fuel that many Kazakhs use to power their cars. But the frustration among the people runs deep in regards to social and economic disparities.

What do the protesters want? The demands of the demonstratorsÂ have expanded in scope from lower fuel prices to a broader political liberalizationÂ by seeking to oust the autocraticÂ forces that have ruled Kazakhstan without any substantial opposition since 1991.

Why does the unrest matter outside this region? Until now, the oil-rich country has been regarded as a pillar of political and economic stability in an unstable region. The protests are also significant for Vladimir Putin, who views Kazakhstan as part of Russiaâ€™s sphere of influence.

How has the government responded? PresidentÂ Kassym-Jomart Tokayev has called the protesters â€œa band of terrorists,â€ declared Kazakhstan under attack and asked the Russian-led military alliance to intervene.Â Officials have institutedÂ a state of emergency and shut off internet access.

The cronyism and corruption chafed at working-class citizens who grew weary of government-connected businesspeople funneling money to themselves.

Posing with her teenage daughter for a photograph with the presidential palace in the background, Gulya Chumkent, 48, said that Mr. Nazarbayev had taken advantage of his position.

â€œOf course it wasnâ€™t right that he enriched himself,â€ she said. â€œBut it wasnâ€™t in our power to do anything about it.â€

Mr. Tokayev acknowledged the vast wealth accumulated by his predecessorâ€™s family for the first time in a speech to Parliament on Jan. 11.

â€œThanks to the first president, Elbasy,â€ he said, using the Kazakh term for Leader of the Nation, â€œa group of very profitable companies emerged in the country, as well as a group of people whose wealth is significant even by international standards.â€

His criticism was striking in a country where denouncing the government can sometimes be cause for arrest. A 2010 law makes it impossible to sue Mr. Nazarbayev or his family members, and it makes all of his and his familyâ€™s banking documents secret.

Mr. Tokayev also demanded that local governments cancel contracts with Operator ROP, which many took as a sign of the beginning of a process to unravel Mr. Nazarbayevâ€™s grip on profit-making centers.

Mr. Nazarbayevâ€™s nephew, Samat Abish, was dismissed as deputy of the powerful security agency. The sovereign wealth fund said that two Nazarbayev in-laws had left top posts at national energy companies. And Mr. Kulibayev, the son-in-law, resigned as head of Kazakhstanâ€™s leading business lobby, though he retained positions in an influential energy group and on the board of Russiaâ€™s Gazprom.

On Tuesday, Mr. Tokayev fired the head of the Central Election Commission, whose daughter is married to one of Ms. Nazarbayevaâ€™s sons.

Many Kazakhs are waiting to see how Mr. Tokayevâ€™s approach will differ from that of his predecessor.

Erzhan Kazykhan, an adviser to Mr. Tokayev, said that his country was committed to democratic reforms. Still, he demurred when asked if the post-Nazarbayev period would herald a new era of genuine political competition.

â€œYou cannot build a Jeffersonian democracy overnight,â€ he said in an interview.

Regardless of who Mr. Tokayev brings into his inner circle, Mr. Nazarbayevâ€™s effective removal from control has emboldened people, said Zhanbolat Mamai, an opposition politician. He cited what he said was a crucial difference between the two men.