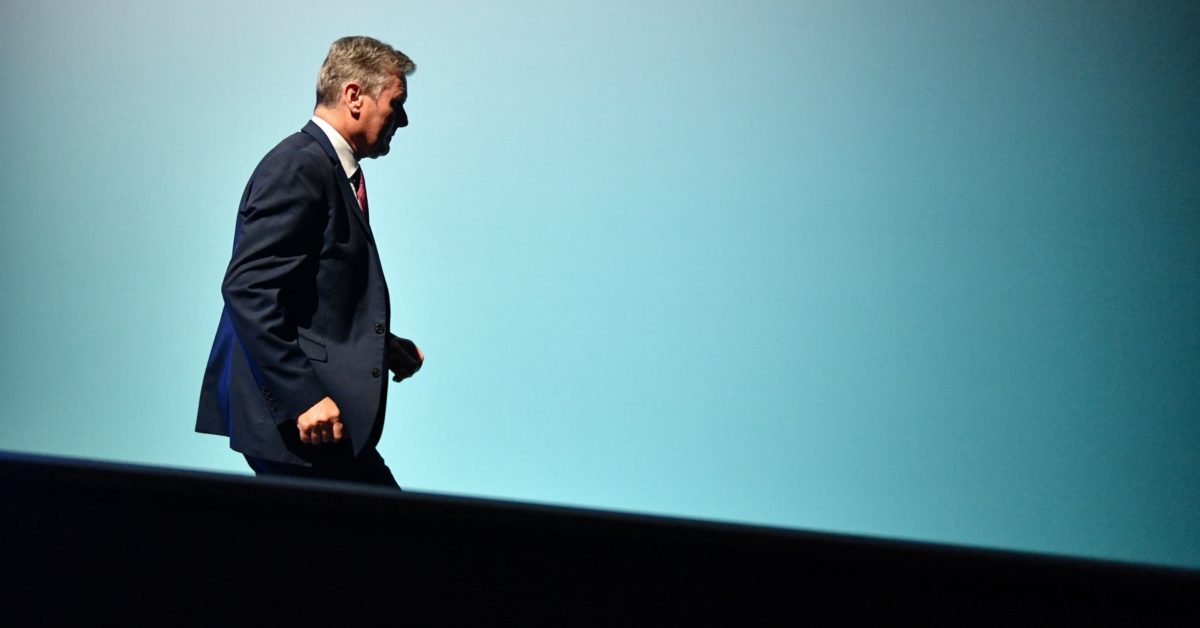 The opposition leader takes to the stage Wednesday for his keynote speech at his partyâ€™s annual conference, the first time he has addressed the party faithful in person since he took over from Jeremy Corbyn 18 months ago.Â

With the Tory U.K. government snagged in a fuel crisis, dealing with rising energy prices and facing tough questions about how to pay for a pandemic the handling of which has been widely criticized, the Labour Party senses an opportunity.

This summer Starmer refreshed his back-room operation and reshuffled his shadow Cabinet, introducing a cluster of disciples of former PMs Tony Blair and Gordon Brown, who aim to deploy the New Labour playbook in preparation for the next election. That includes pursuing more proactive relationships with journalists, and taking on the socialist left.

Events in the U.S. have heartened one shadow minister, who said President Joe Bidenâ€™s victory over Donald Trump had shown that with an organized and focused campaign, a populist leader could be overthrown.

Yet while recent polls have shown some marginal improvement, the Conservatives remain comfortably ahead and many in the party and beyond struggle to identify Starmerâ€™s top priorities.

Blast from the past

After failing to cut through during the pandemic, Team Starmer had a rethink this summer.

Morgan McSweeney, who had been chief of staff, became head of election planning and was replaced by Sam White, former adviser to former Chancellor Alistair Darling. Luke Sullivan, previously in the whips office, was appointed political director.Â

Added to the mix are two MPs: Shabana Mahmood, national campaigns coordinator, and Conor McGinn, deputy coordinator and political lead on communications. Jenny Chapman, who was previously Starmerâ€™s chief adviser, was edged out and given a job as shadow Brexit minister after widespread complaints about her approach to the Hartlepool by-election.

Some say the outfit is noticeably more efficient already. â€œIt was a criticism of Morgan McSweeney and Ben Nunn that they were sort of absentee landlords,â€ said a Labour official.

In contrast, Doyle was described as being â€œheavily involvedâ€ in Julyâ€™s Batley and Spen by-election (which Labour won). This was seen as a â€œturning point,â€ according to a second Labour official. Doyle has taken to liaising with groups of journalists at left-leaning publications via WhatsApp in a bid to shore up relations.

One person who was there said White had presented a clear and coherent message for the upcoming party conference. â€œIn the space of an hour there you had much more hands-on involvement than you have had from McSweeney in well over a year. What I sense is a deliberate attempt to be more hands on, plugged in and available to the shadow Cabinet.â€

In turn, McSweeney seems more comfortable in election planning mode, according to multiple party figures. Having Mahmood and McGinn on board has â€œsharpenedâ€ the operation, one Labour aide said, as having politicians advising on comms helps to get buy-in from MPs.

Others disagree. A Labour official claimed: â€œKeir doesnâ€™t really have many long-term friends or allies in the way Blair or even Corbyn did, so heâ€™s just defaulted to this weird patchwork of Blairites.â€ They added Doyle got the job â€œbecause he was waiting in the wings for years and nobody else wanted it.â€Â

Mattinson was hailed by one colleague as queen of â€œsimplification â€” doing that thing of saying â€˜these are the people whose votes we need to win, that these are the messages we need to get to those people.â€™â€Â

But another research specialist who worked closely with her complained focus groups were being used too simplistically. â€œRisk mitigation is given more importance than making hard decisions. If someone doesnâ€™t like something itâ€™s dead â€” even if thatâ€™s like one person in Norwich.â€

Members of Starmerâ€™s squad themselves shy away from comparisons to Blair. â€œThe modern divide is centrist moderates versus the socialist campaign,â€ one adviser said, while another insisted: â€œThese people like hard work and getting on with it and efficiency â€” no one ever really talks about peopleâ€™s politics.â€

Reasons to be cheerful

Staffing aside, there are other reasons for the Labour leader to feel optimistic on the morning of his speech. While it prompted headlines about infighting, he succeeded earlier in the week in pushing through a number of rule changes which will give MPs more of a say in choosing future party leaders and make it harder for rank-and-file members to deselect Labour parliamentarians.

This involved a stand-off with the left of the party, many of whom still hold a candle for Corbyn, and from which Starmer emerges strengthened.Â

The Labour leader is also now able to routinely meet and talk to MPs and voters in person, which hasnâ€™t been possible for most of his leadership. He hinted at his own frustration with being a virtual leader when he wrote recently that the end of COVID restrictions meant that â€œI was finally able to do what I always wanted to do as leader of the Labour party: take our ideas for the future to people.â€

In addition, a cluster of problems facing the country including supply shortages, rising energy bills and cuts to welfare have the potential to throw the Conservatives off-course â€” if Starmer has the chops to go on the attack.

Tim Bale, professor of politics at Queen Mary University of London, said: â€œAn intervention which sums up in a humorous way the chaos the country seems to be facing at the moment, ridiculing the government, could actually be something that makes people sit up and take notice. It could change the impression of Keir Starmer as being overly serious.â€

It all raises the question of what exactly his message is. Starmerism has begun to take shape via his recently released 12,000-word essay on his vision, â€œThe Road Ahead.â€

If he sticks with the same themes for his conference speech, we can expect plenty on themes of contribution â€” that people should be rewarded fairly â€” and security, whether in your job, your housing or your neighborhood. On this score, Ainsley and another Labour communitarian, Paul Ovenden, have been influential, insiders say.

In a break from Labour under Corbyn, Starmer has shown he wants to return to an emphasis on law and order and extended a hand of friendship to the private sector.Â

â€œThe speech will be future-focused, it will be outward-looking, it will be turning the page,â€ said one Labour aide.

Angela Smith, Labourâ€™s leader in the House of Lords, said: â€œI think weâ€™re going to see the Labour Party coming home. A lot of people who voted Labour in the past, theyâ€™ve wanted to vote Labour again but havenâ€™t felt able to. But I think theyâ€™re coming home to vote for us again.â€

â€œItâ€™s not about New Labour or old Labour, but looking forward â€” itâ€™s more visions of 1945 than 1997, in that in â€˜45 there was a big crisis and a need to rebuild â€” you have to look at the future and not to the past and regurgitate old arguments.â€

The trouble is, not everybody thinks Starmerâ€™s recipe for rebuilding is distinctive enough. One party official, asked what Starmerâ€™s vision for the country was, replied: â€œCataracts.â€

A party delegate said: â€œI disagree with Tony Blair but I know what he stood for. Iâ€™m honestly not sure what Keirâ€™s No. 1 priority is.â€

Gavin Barwell, former chief of staff to ex-PM Theresa May, tweeted last week: â€œI just read Keir Starmerâ€™s ten principles. I agree with eight of them and partially agree with the other two. This either means I am in the wrong party or they are so bland that they donâ€™t tell us anything useful about what he would do if he became prime minister.â€

Having spent the first half of his leadership under the bonnet of the party, the pressure is on for Starmer to take the wheel and make an impression â€” not just in the conference hall but beyond, with voters who are not necessarily inclined to vote Labour.

As one MP who lost their seat in 2019 put it: â€œThe challenge is not for him to lay out what he believes in academic terms but to establish an emotional connection. A kind of Prescott punch, really.â€