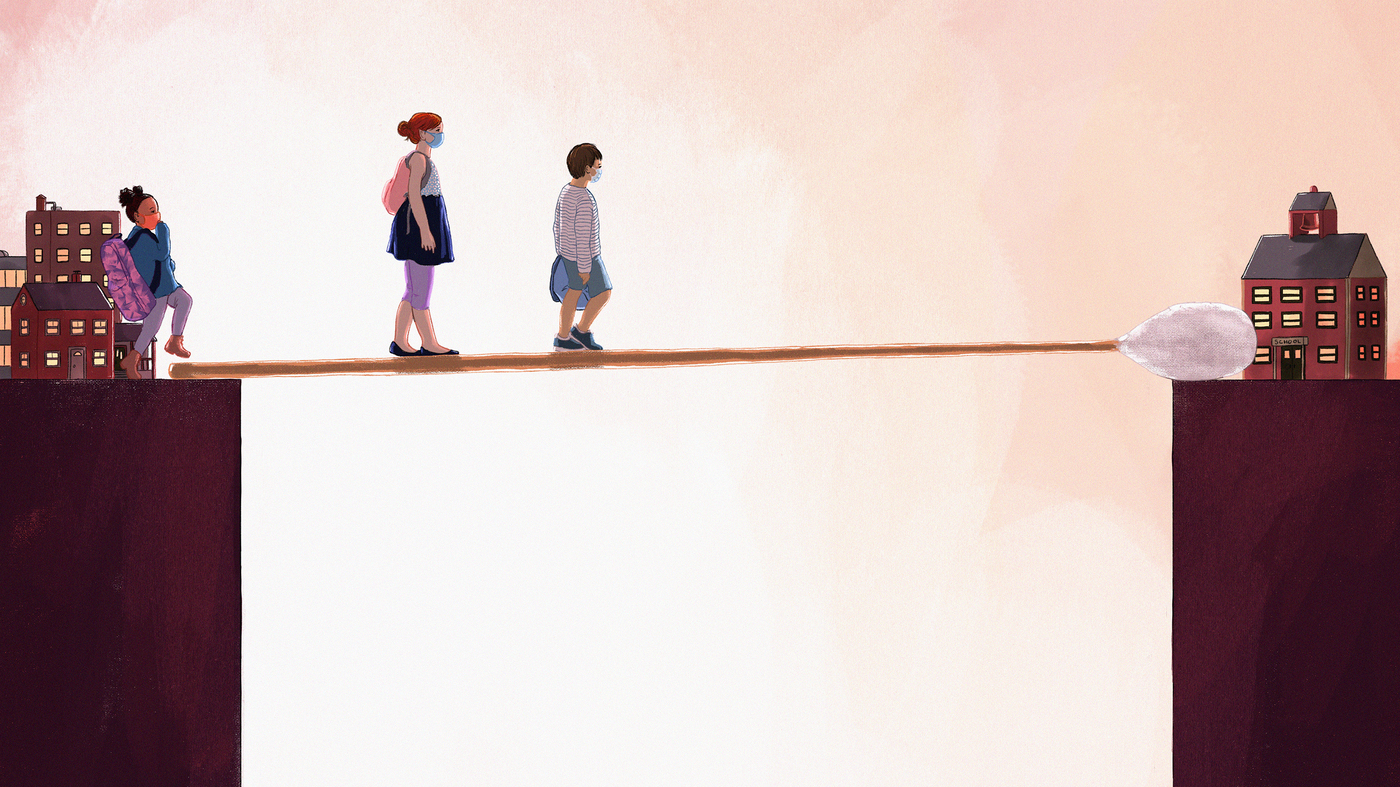 Bryan has only spent one uninterrupted week in fifth grade since classes started in early August. His charter school has sent him home five separate times to quarantine because of exposure to COVID-19, though he’s never tested positive. He’s missed more than 30 days of school, and he’s struggling to keep up with his lessons.

Bryan is the second of five siblings. His family emigrated from Mexico, and his parents run a restaurant in Nashville. NPR isn’t using his family’s last name to protect his privacy as a minor.

Bryan’s is an extreme case, but quarantines are keeping many children home this year.

When a student tests positive, the Centers for Disease Control and Prevention recommend sending the infected student and all unvaccinated close contacts home from school for 14 days. In communities with lots of cases, that can quickly add up to thousands or even millions of lost in-person school days combined.

The organization Burbio, which has been tracking this, estimates at least 2,200 schools have closed entirely since the beginning of the school year. In late August, the state of Mississippi reported it had already quarantined 15% of its students. And reports from around the country suggest tens of thousands of students have been out on quarantine at various points in the still-new school year: more than 23,000 students and school staff in the Atlanta metro area; at least 7,500 students and staff in the New Orleans area, more than 5,600 students in Chicago and 4,790 students in Rock Hill, S.C.

But there is a safe alternative to all these disruptions that could reduce quarantines without increasing spread: more testing.

Community spread of COVID-19 is still considered high in every U.S. state but California and Connecticut. Schools have been gradually softening their quarantine rules as they face the reality of sending home hundreds or thousands of students for weeks at a time.

In the few weeks since their school years started, New York City, Philadelphia, Montgomery County, Md., Anchorage, Alaska, and several other locations around the country have loosened quarantine restrictions, according to Burbio. In Florida, for example, schools may notify close contacts, but quarantine is optional for families as of Sept. 22. In Utah, instead of staying home to quarantine, close contacts can attend school as long as they wear a mask. (Masking in Utah is optional for other students and staff.) But there is a fear that these policies could allow cases to spread.

CDC guidance does provide an alternative to 14-day quarantines in its general population guidance: It says, if there’s sufficient testing available, it’s permissible to shorten quarantines of close contacts to seven days, as long as there are no symptoms and a COVID test taken within 48 hours of the seventh day comes back negative.

Some places are trying to reduce quarantines even further by swabbing more noses. The state of Massachusetts has a “Test and Stay” program in which close contacts come to school and take a rapid test every day for five school days. They can stay at school as long as they remain negative.

There’s research to back what Massachusetts is doing. A peer-reviewed, randomized controlled trial conducted in the U.K. last spring found that a similar test-to-stay policy with daily testing for seven days was just as effective as a 10-day quarantine in preventing COVID-19 spread in high schools.

If used widely, test-to-stay could prevent millions of students from missing school days by the end of the year. But access to rapid tests, and in particular the nurses or other staff to administer them, is not equal everywhere in the country.

“It’s an incredibly difficult lift,” says Maggie Graul, the K-12 COVID-19 testing program manager for the Utah Department of Health. Students in her state are allowed to take a test at day seven either to come back from quarantine or to take off their masks, but few are doing so.

How quarantines can hurt student progress

As in Bryan’s case, repeated quarantines can mean a lot of lost learning time. Schools don’t always have remote learning plans that can snap into place instantly when individual students are sent home unexpectedly. And parents lose childcare, again unexpectedly.

Quarantines make it harder for students to settle into the routines of in-person learning and make up for lost time, says Bree Dusseault. She’s been tracking school reopening plans for the Center on Reinventing Public Education.

“If you imagine some number of students, possibly each day, having to go home due to new exposures, it makes it really, really hard for teachers and staff to apply the learning strategies that we know are necessary to help catch kids up from the last two school years of losses.”

She points out that “chronic absenteeism” is typically defined as missing 10% of school days in a year, or 18 days of school. It’s considered an important risk factor for failing school and dropping out. A student sent home repeatedly on quarantine with no live teaching may be similarly at risk of disengaging from school.

Still, test-to-return policies may be an inequitable solution if districts don’t have easy access to tests. Dusseault says students from high-income families may be able to afford to take a test privately to return to class earlier, while those from low-income families in the same district have to stay home for the full 10 days or two weeks.

Bryan’s parents have had trouble taking him to be tested, not only because of the expense but because they work such long hours and have younger children to take care of.

Last year, Bryan did fine in virtual learning over Zoom. But during these repeated quarantines, he’s only gotten homework assignments to complete.

“They don’t call on the phone to explain it, nothing,” says his father, José. “How is he going to learn if there’s no one to teach him?”

José doesn’t feel able to help Bryan because he only completed six years of education in Mexico. The school has already sent a letter home for Bryan’s parents to sign saying that he is in danger of failing two of his classes.