Kinzinger Says ‘The Torch Has Been Passed’ From Jan. 6 Committee To DOJ 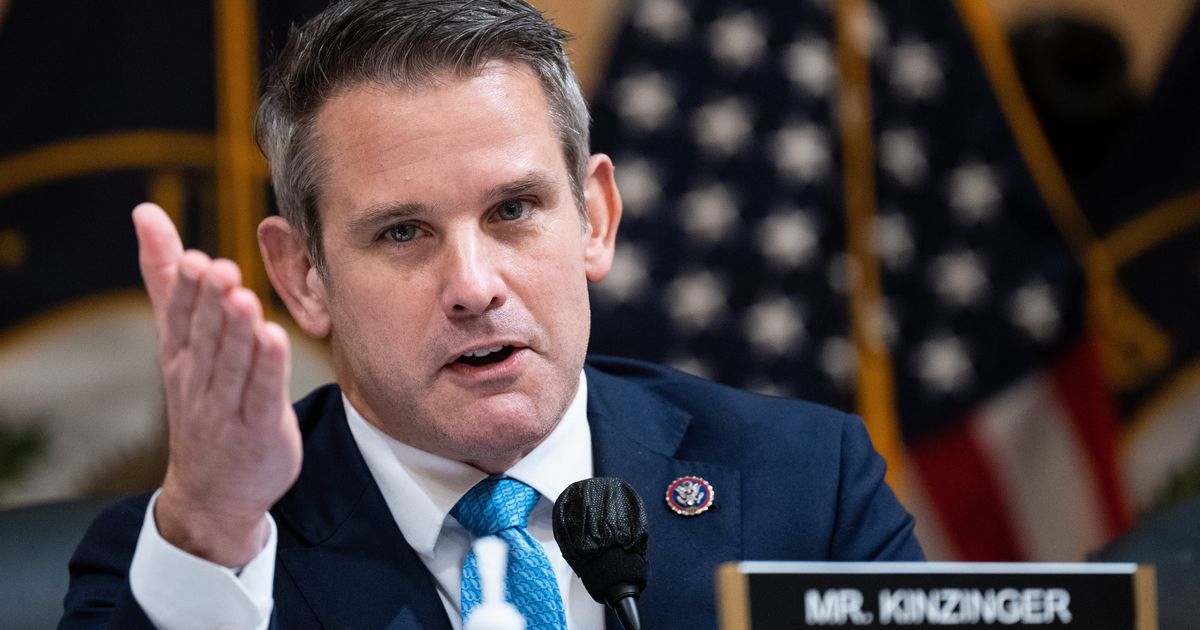 Rep. Adam Kinzinger (R-Ill.) said on Sunday that “the torch has been passed” from the House Jan. 6 committee to the Justice Department and the American people, following the committee’s final hearing before the November midterms that highlighted former President Donald Trump’s central role in the insurrection.

In the committee’s public hearing last Thursday, members laid out damning evidence showing Trump’s plan to declare victory in the election regardless of the results, as well as the U.S. Secret Service’s advance knowledge of the violence that broke out at the Capitol. Committee members closed out the hearing by unanimously voting to subpoena the former president in the investigation.

Trump responded to the subpoena with a long-winded letter posted on his social media platform Truth Social, repeating the same lies he’s peddled for nearly two years now ― including that the election was stolen from him. The former president did not say in the letter whether he would agree to testify before the committee.

“Well, I mean it was 14 pages of ― kind of every ― seems like every statement the former president does now is increasingly long and even more rambling. So I don’t know, I couldn’t glean whatever he got from that,” Kinzinger told George Stephanopoulos on ABC’s “This Week.”

“What I know is this. We made a decision and ― in front of the American people, you know, not behind closed doors ― to begin the process of subpoenaing the former president. He’s required by law to come in,” he continued. “And he can ramble and push back all he wants. That’s the requirement for a congressional subpoena to come in.”

During the months of hearings and interviews, the Jan. 6 committee has weaved footage from that day with first-hand testimony from mostly Republicans and Trump loyalists to prove that the former president attempted to overthrow the 2020 election and stay in power through any means necessary.

Despite losing the election, Trump ignored the advice of senior staff, the courts and his own Justice Department, continuing to push the election fraud lie that has now spread to Republican candidates running for office this year. Kinzinger said Sunday that the threat of election deniers holding office and subverting democracy is “certainly” continuing.

“Look, I don’t think this is just going to go away organically. This is going to take the American people really standing up and making the decision that truth matters,” he said. “With these deniers out there that can’t even agree on basic facts or will lie to the American people ― or people like [House Minority Leader] Kevin McCarthy, who’ve been put in a very important position that refuses to tell the truth because that’s much harder ― or that’s much easier to just lie than to tell the truth and still try to win the speakership.”

“This is the fight. And I would love to say this was going to happen easily,” he continued. “It’s going to take everybody’s work out there working hard, because don’t think you want to leave your kids a country off like what we’ve been living in, in terms of how divided it is.”

“This is going to take the American people really standing up and making the decision the truth matters.” https://t.co/AnBcm6DHka pic.twitter.com/fIbzsMFvVR

The committee is expected to compile a final report that will include legislative recommendations and potential criminal referrals to the Justice Department. Neither of those decisions will automatically result in action, but the panel hopes that their investigation has at least helped quash Trump’s conspiracy theories and disinformation about the election and the insurrection.

According to Kinzinger, the question of whether the committee will make criminal referrals isn’t that significant because the Justice Department is “moving forward on this anyway” and “appears to be pursuing this pretty hard.”

“It’s putting those facts together, putting together in more of ― in a deeper kind of way exactly what we know. For instance, the last hearing I did before this last one, we ― it was about an hour-and-a-half long. That could have been about a four-hour hearing,” the congressman said of what the public can next expect of the panel. “So, you’ll see more of those details, we’ll start to work on recommendations, and then again, we put out that report.

“And really, the torch has been passed ― yes, to the DOJ, but also to the American people,” he continued. “Because we’re saying, ‘Here’s what the deal is, now it’s up to you to stop this from, A, happening again, and really take control as a self-governing country. What kind of a country do you want to live in? This is not acceptable how we’ve been doing it. We can do way better.’”